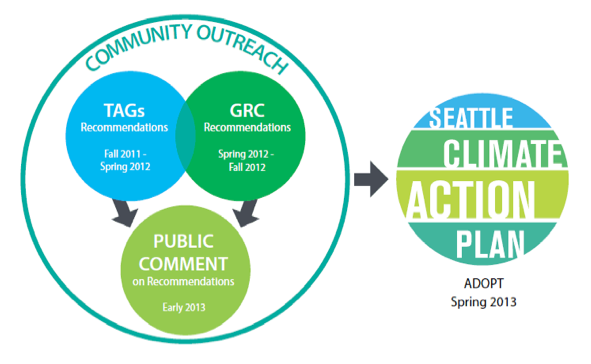 The City of Seattle has recently updated their Climate Action Plan, with the goal of becoming carbon neutral by 2050. With the ambitious goal of carbon neutrality as its guide, the 2013 CAP takes a broad and long term view. Climate change is not a stand- alone issue separate from the other issues cities face.

It is rooted in land use, transportation, and building energy patterns that have evolved over generations. Similarly, the solutions to climate change are not stand-alone, and are part of Seattle’s work to reorient land use patterns, transportation infrastructure, and building energy systems to build vibrant communities. Therefore, the 2013 CAP provides a coordinated strategy and long-term vision for action that cuts across City functions.
The strategy focuses on City actions that reduce GHG emissions while also supporting other community goals, including building vibrant neighborhoods, fostering economic prosperity, and enhancing social equity. In addition, the 2013 CAP
includes actions that will help us prepare for the likely impacts of climate change.
GHG emissions can be found in virtually every sector of our community and economy. The City actions in the 2013 CAP focus on those sources of emissions where City action and local community action will have the greatest impact: road transportation, building energy, and waste, which comprise the majority of local emissions and actions to increase local resilience to the unavoidable impacts of climate change.