/ Financial / A Promotion and New Hire for AASHTO’s Policy Staff

A Promotion and New Hire for AASHTO’s Policy Staff 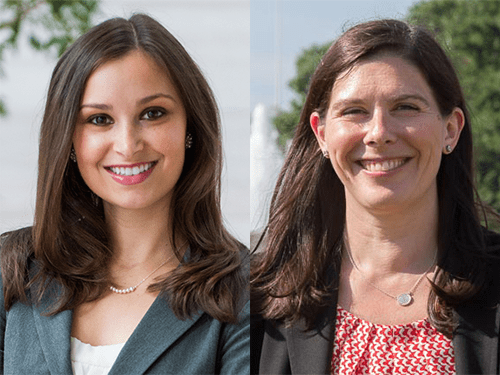 The policy division of the American Association of State Highway and Transportation Officials is promoting Susan Howard (above, right) into the role as program director for transportation finance, effective Jan. 7, 2019, and is hiring Avital Barnea (above, left) to fill Howard’s current role as program manager for freight starting on Jan. 22, 2019.

Howard joined AASHTO on June 4 this year after a five-year stint as director of government relations and legislative affairs for the National Association of Development Organizations and six years spent as the federal legislative programs coordinator for the North Carolina Department of Transportation.

In her new role, Howard – who holds a Bachelor of Arts in political science from Guilford College – will serve as the liaison to the AASHTO Committee on Funding and Finance, helping to lead AASHTO’s policy development on federal transportation funding and financing issues. She will also serve as director of the BATIC Institute: AASHTO Center of Excellence.

Barnea, who will be replacing Howard as program manager for freight, has served as a policy analyst and grant manager at USDOT’s Office of the Secretary for the last four years, managing the agency’s TIGER/BUILD discretionary grant program.

A Montana native who got her start in transportation in Minneapolis, Minnesota, as a Metro Transit control center staffer, Barnea also worked at the Federal Transit Administration from 2011 to 2014, which followed a stint on the Senate Finance Committee handling surface and water reauthorization legislation.

In her new role, Barnea will be AASHTO’s principal freight policy representative, serving as staff liaison to the group’s special committee on freight and council on water transportation, helping with the council on rail transportation. She has a Bachelor of Arts in geography and master’s degree in urban and regional planning, both from the University of Minnesota.