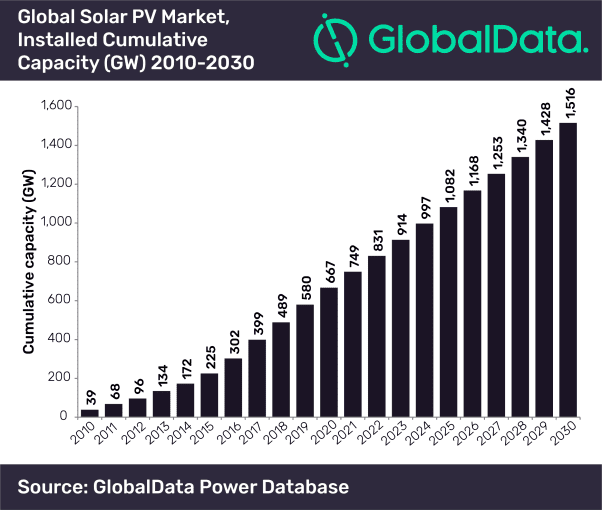 Asia-Pacific (APAC) will continue to lead the global solar photovoltaic (PV) market over the next seven years due to abundant availability of solar energy in the tropical countries and government support in countries such as China, India, Japan and Australia, says GlobalData, a leading data and analytics company.

The company’s latest report ‘Solar Photovoltaic (PV) Market, Update 2018,’ reveals that strong demand for PV in countries such as China, the US, India, Japan, Germany and Australia will drive global solar PV installations to cross 1,000 gigawatt (GW) of cumulative capacity by 2025.

APAC remains the leading region in the global solar PV market with a share of 58.3% in the global cumulative solar PV capacity in 2018, according to the report.

Das adds: “China, which is the largest market for PV in the world, has witnessed a declining trend in annual additions in 2018. The country’s annual additions are expected to decline in 2018 to around 42GW from 53.1GW in 2017.”

The key reason for the decline is attributed to the 2018 Solar PV Generation Notice released by the China’s National Development and Reform Commission, which has set tough limits to cut down the solar PV generation in 2018 and beyond.

However, the country will continue to dominate the global PV market and will continue install the highest PV capacities than any other country during the forecast period.

Das continues: “India, another key country in the APAC region as well as the global PV market, will continue to add record capacities each year during 2018-2022 in order to meet its aggressive national solar PV targets.”

Countries such as India and Japan have taken up auctions to increase the market uptake for solar PV, leading to cost competitiveness, and encouraging state-owned distribution utilities to award PV projects through a bidding route. Auctions allow policymakers to control both the price and quantity of PV energy by providing stable revenue guarantees for project developers while ensuring that the renewable generation target is met more precisely. Against this backdrop, many new and emerging PV markets have taken up the auctions route to increase their PV market uptake.