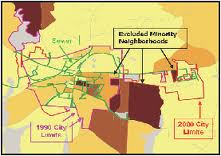 The Cedar Grove Institute has been using maps to exhibit patterns of municipal discrimination against low-income and minority communities for almost a decade. The patterns, rooted in the days when residential discrimination was supported by law, have been reinforced under the cover of such contemporary land-use mechanisms as annexation, zoning and extra-territorial controls.

To produce the maps, the institute employs geographic information systems technology, a computer-based tool for organizing, analyzing and displaying data in a spatial or geographic context. While the maps seem simple, producing them is anything but. Data must be collected from a host of sources, including government databases, door-to-door surveys and Global Positioning System devices. The data is digitized, analyzed, converted to images and layered together in various combinations.

This democratization of GIS has spurred new thinking about its potential application at the grassroots, rather than institutional, level. University of North Carolina School of Law Dean Jack Boger has worked with the institute on some of its municipal discrimination cases and concluded that the phenomenon of exclusion knows few geographic boundaries. “This is a problem of nationwide scope,” Boger says. “The evidence is, in effect, irrefutable.”

Comments are disabled
NEXT ARTICLE
Los Angeles Faces a 60-year Backlog on Road Repairs
May 6, 2013
PREVIOUS ARTICLE
Calling for a New Deal for Urban Australia
May 3, 2013