Constructible Models: Lead to Time and Cost Efficiencies in Building a Particleboard Plant 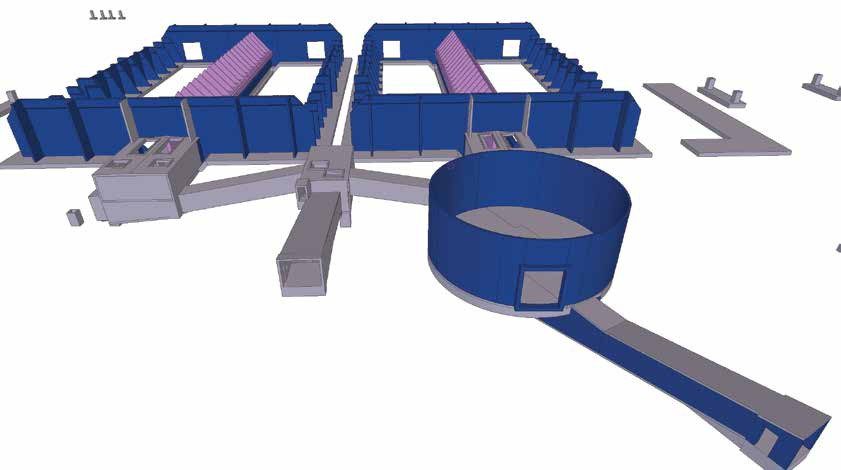 The main concrete structure can be seen in this overall model view.

From its blank canvas in Grayling, Mich., a year ago, the site of ARAUCO’s new particleboard operation has transformed into a vibrant construction project. A leader in sustainable-forest product solutions and market innovation, ARAUCO is building the most-modern facility of its type in North America: a state-of-the-art manufacturing plant that will produce world-class decorative wood-panel products used in home interiors and furniture across the country.

It’s expected that the ARAUCO Particleboard Plant will create approximately 200 permanent jobs and 700 construction jobs. In addition to the economic benefits, the plant will extend the effective and efficient use of forest resources by utilizing wood by-products (such as wood chips) from local manufacturers.

An aerial view of the Civil model of the main structure (top) shows tunnel excavations and backfill. A model of the secondary building shows deep excavation for construction. 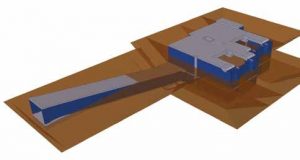 With the vision for a new plant that would match its innovative spirit, ARAUCO pulled together a tech-forward team of architecture, engineering and construction professionals with the expertise and resources to get the job done.

Adding Value Across the Project Lifecycle

Known for innovating through new construction delivery methods and its use of technology, Barton Malow was awarded the project’s civil, concrete, steel reinforcement and pre-cast installation contract. Barton Malow is a respected industry leader in advancing Building Information Modeling (BIM) to bring added value and efficiency to its projects. From pre-construction to construction and production tracking, the Barton Malow team leaned on Tekla Structures, Trimble’s BIM software, which helped solve logistical and constructible issues related to the design’s complex geometry, collaborating with the project team and maintaining all information in one model.

During the estimating phase, Barton Malow did a traditional take-off while also creating a parallel 3D model. “The cast-in-place work was complicated,” says Aron Csont, senior project manager at Barton Malow. “The 3D model was an important step early in the project, because it brought the 2D drawing to life and gave us a visual understanding of our build plan and, especially, how we would break down and sequence the pours. Relying on only the 2D drawing would have created problems downstream.”

The model allowed the team to compare quantities to traditional take-off and verify the numbers, particularly in the project’s curved and tunnel areas. “The quantities and production rates based on the model were accurate and much tighter,” adds Csont. “At Barton Malow, our mantra is ‘plan the work, work the plan.’ The 3D model provided more granular information on quantities by area, location, phase and level as well as the clarity to ensure that the sequencing was right.”

With a pre-construction model in place, a Barton Malow VDC engineer collaborated with a lead detailer to break down the generic shapes in the model to sequence and assign core numbers to the pours. Trimble’s Open BIM approach made it easy to then import those numbers into Primavera’s P6 software for scheduling.

“Having the preliminary work done, we were able to tie the pour sequence back to the schedule so our 4D schedule verification wasn’t just a marketing video, it was based on actual pours that were well-planned and more meaningful for construction,” notes Hunter Lynch, VDC engineer, Barton Malow. “Tekla Structures provided the level of detail and accuracy needed to break up the concrete structure prior to tying the model to the schedule.”

Everything in One Model

Barton Malow modeled the 16,000 cubic yards of concrete, 1,450 tons of rebar, 1,381 embeds, formwork and 65,000 cubic yards of civil scopes in a single model with one software package. The ability to visualize everything in one model made it easier to manage and, more importantly, helped the team identify problems before it was too late.

“Managing one file makes a tremendous difference,” adds Bo Snyder, a Barton Malow VDC manager. “With the rebar, formwork and embeds all in one model, our engineers were able to view any changes in the context of the entire model so they could use that information to redesign or generate an RFI. Ultimately, we were catching issues immediately vs. waiting to find them on the jobsite. It reduced risk for us throughout
the process.” 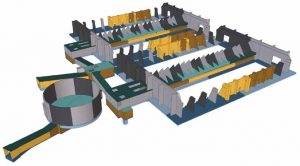 A model representation shows the structure’s pour sequence and breakdown. The pour model was created in collaboration with site and office teams.

Barton Malow self-performed foundation excavation, placing formwork, tying rebar, installing embeds and pouring concrete. “We were able to take on the full civil scope (excavation and concrete) because Tekla Structures gave us the ability to do everything in one model vs. two or three different models across various software products,” says Matt Hedke, senior VDC self perform manager. “As a result, we were able to make intelligent and well-thought-out decisions.”

The team also used Trimble Connect, a cloud-based collaboration platform that allowed them to view, share and access project information from anywhere at any time. By publishing the model to Trimble Connect, the onsite team could check for potential problems, visualize the design onsite and coordinate scheduling.

Barton Malow translated and rotated the model or 2D drawings to the correct coordinate system. If done in 2D (due to time constraints), Barton Malow then would overlay the 2D layout over the model. This allowed them to do a quality check to ensure the model was built correctly, allowing them to export points from the model or 2D software into data collectors used for layout in the field.

As-built production information also was linked back to the Tekla Structures model for tracking budgeted vs. actual quantities and production rates. “With 3D modeling, we can track quantities accurately and track production rates,” notes Csont. “For example, I could use the model to visualize and validate that the estimated quantities from the bid could be completed with the actual man-hours onsite. It was all figured out during the preconstruction phase or prior to work starting, so we could track against it to ensure we were hitting the numbers both in cost and schedule. By using the model, identifying, planning and understanding the units was no longer arbitrary. We communicated and leveraged the model to report on quantities weekly.” 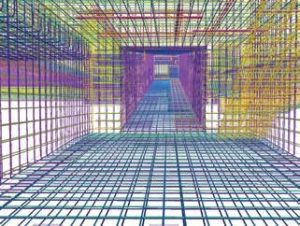 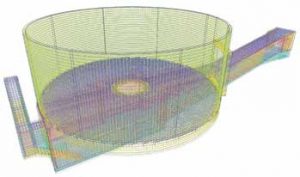 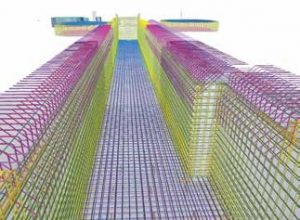 Rebar fabrication information was derived directly from the model and sent to fabrication. Different views show rebar from the lower tunnel area looking toward the transition area (top), an overall reinforcing view of the tank area and adjacent tunnel (middle), and a view of tunnel reinforcing from one of the secondary buildings (bottom). 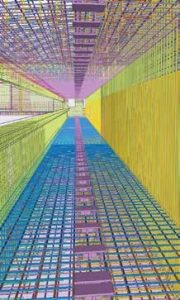 Coordinating rebar and embeds was critical to project success, and having all items in one model assisted in this endeavor.

More Than a Buzzword

From start to finish, Barton Malow leveraged the constructible model to increase efficiency, eliminate rework, reduce waste and collaborate. “Constructible isn’t just a buzzword,” notes Hedke. “We’re not a broker. We’re builders. Tekla Structures gave the level of detail to ‘build it virtually’ in collaboration with the field teams and the confidence that on the site, the model would be exactly what was getting built.”

At 820,000 square feet, the ARAUCO plant will be one of the most productive in the world. It will feature the continent’s largest single continuous particleboard press, in addition to having a capacity of 452 million square feet. With a project this size, using technology in a seamless manner becomes a focal point for Barton Malow. Foremen are 90 percent paperless, and the team leverages the 3D model and software to create a technology-enabled workforce.