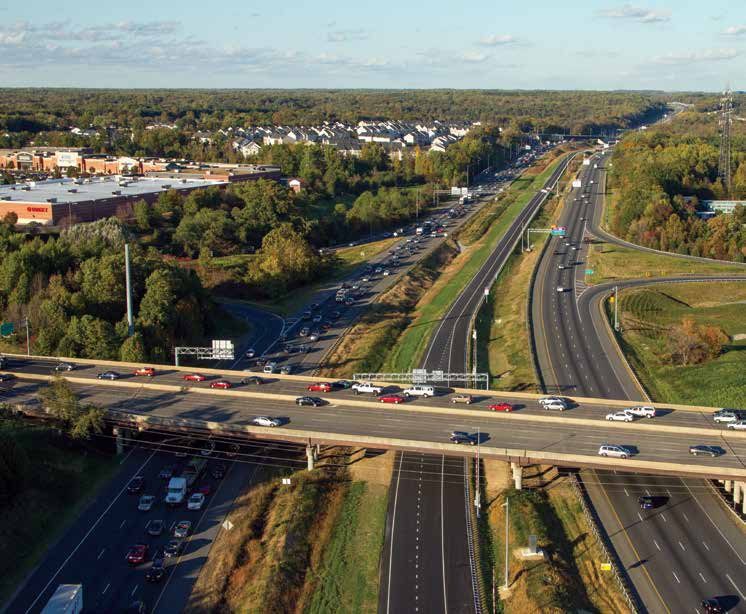 On Halloween, Oct. 31, 2017, commuters who use the heavily congested I-95/395 highway in Virginia received a special treat: a new 2-mile-long reversible express lane that would significantly ease congestion on the heavily travelled interstate. Although they surely appreciated reduced slowdowns, more-navigable merges and lane changes, and ultimately a shorter commute, most were unaware of the coordinated teamwork that took place behind the scenes to make the treat a reality.

According to traffic counts by the Virginia Department of Transportation (VDOT), the I-95 corridor near Garrisonville Road handles about 150,000 vehicles per day. About 35,000 of those travelers exit the express lanes and get off the highway at Garrisonville Road. The result is traffic weaving and jockeying for position, resulting in significant delays and potential for accidents.

To alleviate this bottleneck and other problems along the corridor, VDOT spent more than 10 years planning, reviewing and engaging the public to develop and execute a project plan. Starting in 2004, an independent review panel evaluated many proposals to improve traffic movement through the area. One such proposal was submitted by 95 Express Lanes LLC, a partnership between Flour and Transurban.

As operators of the existing I-95 express lanes, Transurban had previous experience working with VDOT in this corridor. In 2006, VDOT finalized an agreement with the partnership to finance, design, build, operate and maintain the new express lane extension.

The first part of a much larger overall corridor improvement was the $50 million 95 Express Lanes Southern Extension, a 2.2-mile reversible single-lane extension of the 95 Express Lanes, extending south past the existing Garrisonville Road exits and entrance ramps. The new lane was constructed primarily in the existing median between the general lanes.

The project also included creating new southbound and northbound ramps between the general and express lanes. The new express lane entrance and exit ramps would allow northbound traffic to enter the express lane south of Garrisonville Road. Southbound traffic would be able to continue south for more than two miles before exiting into general travel lanes. Existing exit ramps and/or flyovers in both directions would remain operational, providing travelers with alternative ingress and egress options. 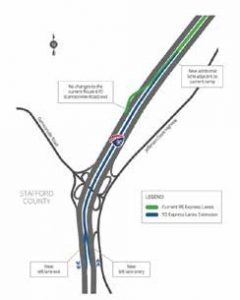 A project schematic details the entrances and exits for the Express Lane Extension.

WRA is an engineering, architectural and planning firm that provides planning, design and construction management services. With a professional and technical staff of more than 750, the firm’s services are focused on the needs of governmental, educational, institutional and private-sector clients throughout the country. The company is headquartered in Baltimore, with offices in Delaware, Pennsylvania, Texas, West Virginia, North Carolina and Virginia. Branch Civil—serving clients in Virginia, West Virginia and the Carolinas—offers a range of services, including heavy civil construction, design-build and site development. Together, this team would face and surmount several challenges between construction start and the Halloween opening of the new lane.

It’s common for heavy civil projects to face a variety of challenges, and the I-95 Southern Extension was no exception. As with most projects, adherence to schedule was of prime importance, and, as a priority project for VDOT, the I-95 Southern Extension included early completion bonuses for the team, adding further incentive to complete the project ahead of schedule. However, many of the site challenges had a direct impact on the schedule and would ultimately push the team toward unprecedented coordination and the adoption of new collaboration tools.

“The challenges started early in the project process with the permit work related to onsite wetlands that would be permanently impacted by the new lane and associated grading,” says Leonard “Lenny” Coleman, P.E., CCM, associate with WRA. “Further, subsurface geotechnical testing revealed poor soils that would need to be replaced or remediated onsite with lime stabilization.”

Adding to the schedule-impacting challenges, the ITS/Traffic Management System (TMS) required a 120-day “burn in” (testing) period. There are not many ITS installations on the VDOT network, and WRA’s Construction Management and Inspections team’s experience with these systems was limited at the time. However, WRA took a holistic approach, doing what it does best and relying on its ITS/TMS subconsultant, CES, to provide specific expertise.

“Although WRA doesn’t do a lot of ITS/TMS work, it’s not too different from what we typically do: digging holes, laying conduit, etcetera,” explains Coleman. “WRA had the know-how for the basics, and we turned to experts as needed.”

As if these known challenges weren’t enough, when the project was about 60 percent complete, a change order was issued to grade out the site for a second express lane to be built at some future date. The team certainly had its work cut out for them. 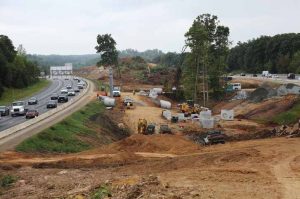 The majority of construction was in the VDOT median.

Going into this project, none of the team members had worked together before, so it was critical to develop trust and work as a unified team. “Nine out of 10 times, when you walk into a project meeting, you can feel the tension in the air,” adds Coleman. “But not on this project. Everyone on the team understood the goal of delivering by November 1.”

To this end, it was essential for everyone to know the challenges and their roles in overcoming them. As a team, they discussed difficulties before they became problems. This served to develop trust among the members. “Everyone trusted everyone,” notes Coleman. “We shared a ‘measure twice and cut once’ mentality, which allowed us to bring the project home early.”

One specific aspect of the project where this tight team collaboration paid off was in response time to design reviews. Although the contract allowed for a 21-day review time, the team was turning them around in seven days. Streamlining review time allowed them to stay ahead of schedule, and cloud-based tools made streamlining possible.

From the start, tight collaboration was important to VDOT, Transurban and the design-build team. In addition to the personal collaborative efforts put forth in meetings and throughout the project, the team also relied heavily on cloud-based sharing tools from a variety of vendors. Using these tools across nearly every phase of the project helped the team stay on task and on schedule.

WRA and Branch used Box, a web-based file-sharing app, for collaboration around the design CAD files. As new drawings were issued, they were uploaded to a folder in Box; as it worked its way through the approval process, it moved through a series of clearly defined folders. After the final design was approved, the drawings were issued to field crews and shared with VDOT via Sharepoint.

Frequent design updates to advanced work packages prior to the release of the Approved for Construction Plans soon led to one of the first collaboration issues the team had to address: outdated paper plans. To prevent errors in construction, the team early on decided to move to digital plans in the form of a PDF file. The digital plan set was hosted on Box and served as the “go to” source for up-to-date information. Hardcopies of various sheets were printed from this one “source of truth,” and contractors and inspection staff were told to check the shared Box folder every day for updates. Further, every time a new change order (CO) was issued, the team was instructed to discard any printed sheets so no one was building with outdated information. 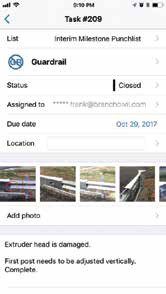 A closed Punch List item is shown in PlanGrid.

Branch learned lessons working on the I-95 corridor before building the previous nine-mile extension of express lanes. The internal Branch project and field management teams worked together before, and it helped identify the critical operation items as well as plan, execute and closeout promptly. Construction productivity tool PlanGrid was used to manage project data, and project management tool Procore was used to track project financials.

The ITS, for example, initially caused some consternation among team members. However, the subcontractor was using PlanGrid internally to track construction progress and share in near-real-time field notes and changes with their office staff. “They tracked every single structure and every step they took on the project,” notes Coleman. Making note of the efficiency with which information could be shared, WRA started using PlanGrid to punch out the project. As they did, CES received punch-list notices immediately via PlanGrid. Although CES and WRA were using PlanGrid to coordinate, Branch was not. Instead, Branch received punch-list information that had been downloaded from PlanGrid and distributed via Box. This caused half-day lags, and Branch soon adopted PlanGrid to eliminate the delay. The tight digital and personnel coordination allowed the team to close out more than 300 punch-list items in 25 days—five days less than the allotted 30. “For comparison, on a similar project not using PlanGrid, it took us six months to close out 600 punch items,” Coleman explains. 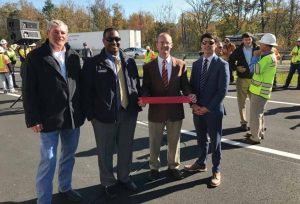 WRA staff at the ribbon-cutting ceremony for the opening of the new express lane extension include (from left to right) Gary Garrett, Lenny Coleman, Scott Mullins and Jeff Cheng.

All project documents and files had to be delivered to VDOT via its SharePoint system. To meet this requirement, the team would hold live review sessions via GoToMeeting to preemptively address issues. Data then were manually exported from the various “live” systems—Box, PlanGrid and Procore—and uploaded to SharePoint.

“As one of our first projects utilizing these sharing tools, we identified areas for improvement on future jobs,” notes Coleman. “One of these areas is data sharing among the various platforms. For example, we were unaware of PlanGrid’s Box integrations, which would have helped cut down on some of the manual file-sharing work.”

Looking back on the amount of work delivered and the ability of the team to meet the tight deadline, Coleman notes that it would have been impossible without the use of robust cloud-based data-sharing tools. “It was critical to success,” he concludes.