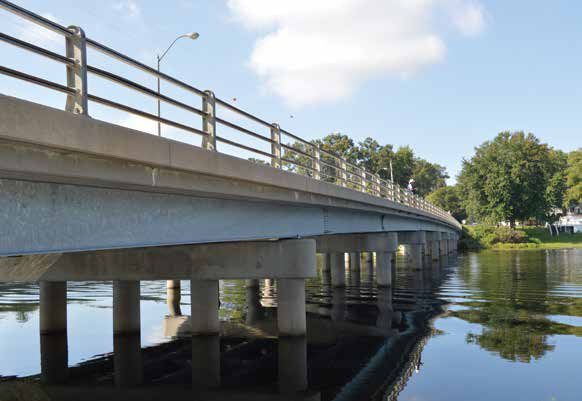 The world is a very different place today than it was in 1966—a time of space exploration, computers the size of an entire room, and color TVs being a new phenomenon. In addition to these scientific and technological advancements, there was an important infrastructure innovation in the United States: the first hot-dip galvanized bridge was built. The 420-foot Stearns Bayou Bridge in Grand Haven, Mich., opened on Aug. 31, 1966, replacing the old, one-lane wooden structure. 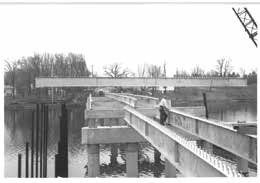 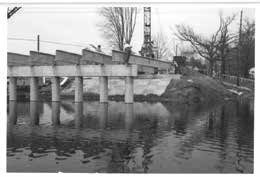 Hot-dip galvanizing (HDG) is the process of dipping fabricated steel into a bath (kettle) of molten zinc to produce an abrasion- and corrosion-resistant coating. Hot-dip galvanizing wasn’t a new coating in 1966, as the first galvanizing plant opened in the United States nearly a century before, but using HDG in bridge construction was an innovative concept. Frank J Brechting Jr., the Ottawa County engineer at the time, opted to design the hot-dip galvanized bridge simply because he believed it was the most economical option for the life of the structure.

Through the years, Brechting Jr.’s belief has proven true. Visits to the Stearns Bayou Bridge in 1991 (at the 25-year anniversary of the opening) and again in August 2017 (after 51 years of service) provide the supporting evidence. During both visits, coating thickness measurements were taken on the main structural beams, diaphragms, bearing pads and railings. In 1991, the measurements on all surfaces had an average of 3.7 mils, with the average on the beams the highest at 6.2 mils and the lowest on the railings at 3.34 mils. The measurements in 2017 were similar, with the structural beams having an average of 5.63 mils of zinc, and the railings—despite some staining—had an average of 3.31 mils. Based on the corrosion rate of this environment and the average coating thicknesses, the bridge should remain corrosion and maintenance free for at least another 50 years, making it a 100-year bridge.

During the 2017 visit, the American Galvanizers Association (AGA) interviewed Ottawa Country Road Commission Project Engineer Brandt Homik to learn more about how the Stearns Bayou Bridge has performed since it opened in 1966. You can hear Homik’s full statement in the “Galvanized Steel Study (GSS)” video on YouTube at www.galvanizeit.org/stearns. In summary, the bridge deck, which didn’t use galvanized rebar, had recently been replaced, but no maintenance has been done to the hot-dip coating on the structural steel. Therefore, the initial investment from Brechting Jr. has been the only cost to maintain the structure of the bridge (excluding the deck replacement). Furthermore, the performance of the Stearns Bayou Bridge has affected the specification of other hot-dip galvanized bridges and elements in the county. 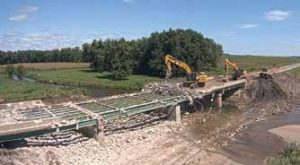 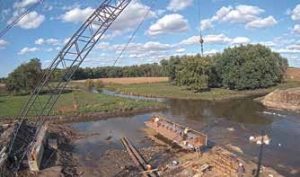 Thanks to the forward-thinking of Brechting Jr., Ottawa County, Mich., learned the value of hot-dip galvanizing bridges back in 1966, but many county engineers are still learning about the advantages galvanizing provides to their bridges today. A great example is Buchanan County Iowa Engineer Brian Keierleber, who (like AGA) is a member of the Short Span Steel Bridge Alliance (SSSBA). He took advantage of a demonstration/research bridge project with the Alliance to build the galvanized steel Jesup Bridge in November 2013. Keierleber used the SSSBA’s online bridge design tool www.espan140.com to develop a custom solution for the Jesup project. It was the first hot-dip galvanized bridge for Keierleber and his county, but it wouldn’t be his last.

At the time, Keierleber said: “Without a doubt, Buchanan County will certainly build more galvanized steel bridges. It all goes back to economics. It will dictate everything we do. It goes back to cost comparisons and being worried about cost savings in the long run instead of the short term.” 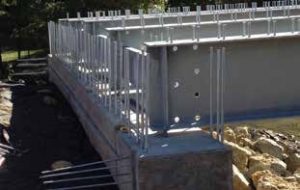 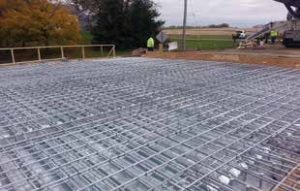 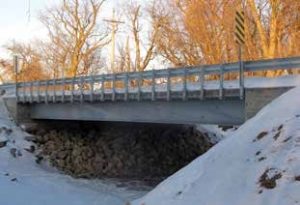 Keierleber stayed true to his word, and in fall 2018 he began the construction of his second galvanized steel bridge near Independence, Iowa. The 200-foot Buffalo Creek Bridge is currently under construction, and AGA has sponsored a live video feed of the innovative project, which (other than the deck) will be constructed entirely of galvanized steel, including h-piles, girders (superstructure), rebar, guardrails and miscellaneous steel elements. Keep an eye on the project by visiting www.galvanizeit.org/buffalocreek.

Although our world has changed significantly in the last 50 years, particularly when it comes to technology, one thing remains the same: hot-dip galvanizing is an innovative solution to protect our infrastructure from corrosion. After more than 50 years, the Stearns Bayou Bridge stands as a testament of how the coating protects the “old,” while the new Buffalo Creek Bridge shows the same benefits for today’s construction. Hot-dip galvanized steel truly transcends time, providing maintenance-free corrosion protection to our nation’s bridges past, present and in the future.