/ Articles / Change Leader: Transforming the World toward a Better Outcome

Change Leader: Transforming the World toward a Better Outcome 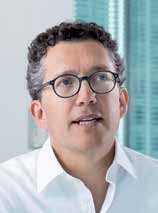 Antonio Gomez-Palacio, Arq. MES, RPP, MCIP, MRAIC, is a principal at DIALOG, focusing on the intersection of architecture, planning and urban design.

“We’re in a really exciting time,” says Gomez-Palacio. After decades of a single-occupancy, car-based system that led to many pitfalls, he believes the pendulum is going the other direction of trying to bring more-sustainable ways of moving around and developing cities. “There’s been a resurgence of prioritizing walking and cycling and active modes of transportation, but also transit. Pick any urban center; if they’re not building transit, they’re thinking about it, they’re really engaging in that conversation.”

He notes that most North American cities still have a long way to go, but attitudes, politics and financing all are changing toward mass-transit and creating more-sustainable, better-designed cities. “Look at Los Angeles, which was car-oriented for such a long time,” he says. “Now they’re investing incredibly; there are very few cities investing quite as much as LA is on transit.”

Based in Toronto but traveling extensively, Gomez-Palacio understands that Canada and the Unites States have different legacy infrastructure.

“Canada never lost its downtown population in the same way many U.S. cities did during the post-war era, which meant there was always a mix of uses and strong population in the downtowns, which allowed them to keep its transit infrastructure to a greater extent,” he says. “Toronto, for example, kept all its streetcars in the urban core as well a functioning subway system throughout.

“Many U.S. cities actually had streetcar systems, and they dismantled them over the course of the second part of the last century,” he adds. “Now they’re in the process of trying to rebuild that, and not just rebuild the infrastructure, but rebuild the behavior and the culture and the appetite for transit in many of those cities.”

“The bigger conversation is about mobility,” notes Gomez-Palacio. “How do people move in and around cities? Transit is the aspiration that if we do things together, in terms of mobility, it’s more efficient and going to be much more sustainable.”

Through his career and research, Gomez-Palacio believes transit has become more than just moving people around different parts of a city; it has become a core element to effective overall urban planning.

Simply capturing ridership should not be the main concern for transit developers and city planners. His firm, DIALOG, coined the term “sustainable urban integration,” which is the notion of refocusing the conversation around transit, not just around transit as a service, but how does it connect with a community? How are the transit corridors planned? How does the transit architecture of the stations prioritize and put passengers first, and become something that’s a hallmark of quality of life?

“That’s when you shift from transit being used by the captive audience—people who have no choices—to choice riders: people who have choices but actually choose to use transit because it’s a better experience,” he notes.

To that end, DIALOG teams include urban planners and designers; architects; and structural, mechanical and electrical engineers, among others. “But we really bring in that focus on design, that focus on sustainability, and that focus on urban integration,” adds Gomez-Palacio.

Gomez-Palacio also has advice for other engineers and urban designers looking to make their transit systems more effective.

“Work with your urban planners; work with your designers; break out of the silos,” he says. “Bring in a multiple-account evaluation approach to the value engineering, and think about not what’s going to capture the captive audience and riders, but what’s going to make somebody really choose to use this system.”

As a specific example, he cites a transit project DIALOG did for the Canadian city of Hamilton.

“We discovered that the regional rail was actually about three blocks away; a little too far a distance for us to assume that everybody was just going to connect and walk between the transit and regional rail. We worked with the community, we worked with the city, we worked with the transit agencies, and we developed this concept of covering that space by doing a large urban plaza: an environment that now was going to be much more a big public-realm space. Instead of traversing and walking three blocks, you’re actually walking across an urban plaza that’s animated. What was perceived as a challenge actually became a huge opportunity.”