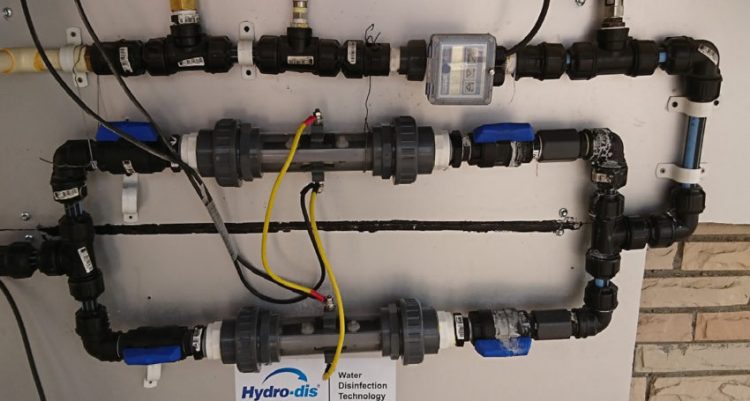 Parul Dubey on November 29, 2018 - in Drinking water, Water
After rigorous testing and the successful completion of field trials in India this year, Hydro-dis is awaiting sign-off on its system from the Mashelkar Committee, which will give it approval to roll out its technology across India’s 27 states.

The water treatment systems can be built to various sizes and can disinfect up to 3 million litres of water a day. They are designed for use in remote villages to make water safe to drink and can also be used to treat wastewater for non-potable purposes such as irrigation or vehicle cleaning.

Headquartered in Adelaide, South Australia, Hydro-dis has been working on its technology since 2001.

CEO Mark Carey said the Hydro-dis technology did not require additional raw materials such as gas because it used minerals and salts already in the water to fuel the process. It can be designed to be solar powered or run by mains electricity

Hydro-dis’ treatment technology uses insitu electro-catalytic generation of chlorine to disinfect water and can be used for various industries to treat potable, non-potable and wastewater. The unique technique creates chloride ions from salt already present in the water even when it is present in very small amounts, making it suitable for freshwater and saltwater sources.

Five units are operating in rural areas in Australia, another two are being built and six units have been shipped to India and Malaysia in the past six months.

“The Australian market is still a good opportunity for us but the volume will come from Asia,” Carey said.

“Based on the interest that we are getting we are gearing up to pull the trigger on high production numbers.” 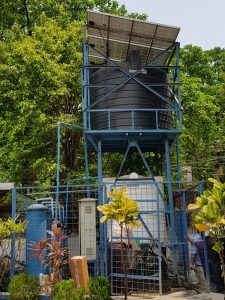 A solar-powered Hydro-dis pilot plant just out of Kolkata

The interest in India began in 2016 on a visit to Rajasthan – a sister state to South Australia – which led to a partnership with the Rajasthan Centre of Excellence in Water Resources Management and a demonstration plant at Malaviya National Institute of Technology in Jaipur.

Overseen by MNIT’s Professor of Civil Engineering A B Gupta, the trial was signed off in February 2018 after achieving the project outcomes. The data for regulatory approval has been submitted to the Ministry for Drinking Water and Sanitation. India’s Mashelkar Committee is also doing its own field inspections and lab testing. A second solar-powered demonstration unit has been trialled in Bengal.

Carey said he hoped the regulatory approval would be granted early in the new year, creating an initial wave of commercial orders.

He said while disinfecting drinking water supplies in remote villages was the main target in India there was also interest in other applications such as treating wastewater to wash municipal bus fleets that previously were cleaned with precious potable water.

“We designed it in Australia for rural and remote communities and the Outback towns where disinfected water is needed so it fits well into the small community and village level water disinfection requirements throughout Asia,” Carey said.

“In India they have these huge underwater tanks that capture all the water from the monsoons and that’s the only water that a village has for the year.

“We’ve also had people from Maharashtra come to Jaipur to inspect the system to see what it can do and as a result of that inspection we’ve got in-principle approval for two pilot projects in wastewater applications in Mumbai.”

The system’s key IP is in its cells, which Hydro-dis plans to continue manufacturing in Australia. However, Carey said the controller part of the units could be manufactured in India or China for Asian markets to keep costs down and maintain competitiveness against traditional disinfection methods such as chemical dosing, UV and Ozone treatments.

He said the Hydro-dis system is simple to use, reliable, portable and it doesn’t have a lot operator inputs such as hazardous chemicals so it removes the potential for problems.

Hydro-dis this year won a Smart Water Award in Australia for its Rajasthan demonstration Unit and the collaboration with Rajasthan Centre of Excellence for Water and Resource Management, the International Centre of Excellence in Water Resources Management, Dematec Automation, the Water Industry Alliance, the South Australian Government and Austrade. 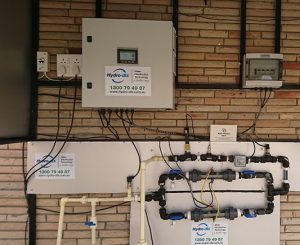 The pilot plant at MNIT in Jaipur, Rajasthan.

Improvements to the system through the inclusion of the latest Generation 4 Cell has also allowed Hydro-dis to develop an “under-bench” prototype for the home market.

Carey said the demand for safe drinking water among Asia’s rising middle class had led to the company identifying an opportunity for the consumer market.

“As a result of the work we’ve been doing in India, Vietnam, Cambodia and China we’re looking at developing a small household unit that we think will be a bit of a game changer,” he said.

“In Hong Kong for example, everybody boils the mains water to drink because they are worried it’s not safe to drink. When you look at the electricity consumption and the greenhouse effect of six million people boiling two or three litres of water a day just so they can have a drink it is significant.

“In Vietnam, households buying the 11 litre containers of drinking water are paying about $25 a kilolitre – if that was coming out of the tap they would be paying about 15 cents.”