/ Energy / Growth of Renewable Energy in Australia will Depend on Decommissioning of Coal-fired Power Plants, says GlobalData

Growth of Renewable Energy in Australia will Depend on Decommissioning of Coal-fired Power Plants, says GlobalData 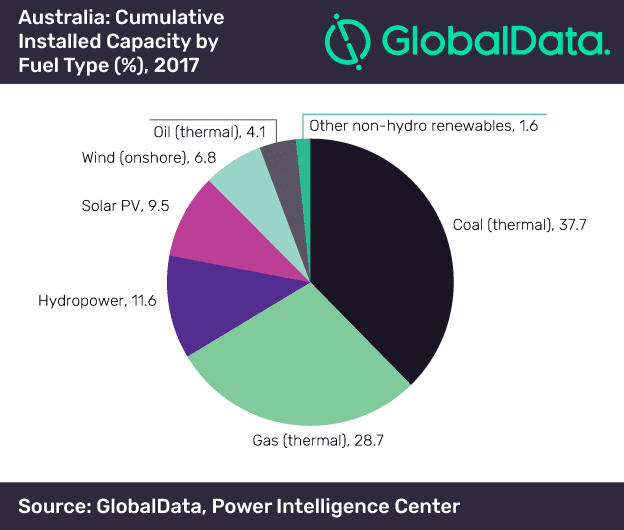 Australia has not been able to decommission its coal-fired power plants at the pace originally envisaged, which has turned out to be its biggest stumbling block in fast tracking renewable energy development, according to GlobalData, a leading data and analytics company.

GlobalData‘s latest report, ‘Australia Power Market Outlook to 2030, Update 2018 – Market Trends, Regulations, and Competitive Landscape’, reveals that the coal-rich nation has been decommissioning its coal-fired power plants at a slower pace while still encouraging the development of renewable power plants, leading to surplus generation. Consequently, the country has been forced to slow down the pace of renewable energy development.

Chiradeep Chatterjee, Power Industry Analyst at GlobalData, comments: “Australia has vast unused renewable potential and aims to generate 23.5% of its energy – equivalent to 33 TWh – from renewable sources by 2020, in accordance with the extended Mandatory Renewable Energy Target.”

As of 2017, coal dominated the Australian power mix, with a share of 37.7% of the total installed capacity, followed by gas with 28.7%. Australia has substantial coal reserves, which account for the dominance of this fuel in the power generation mix. The country’s coal reserves, which have higher thermal efficiency due to lower sulphur content, represent around 14% of the world’s black coal resources. Additionally, the country has 29% of the world’s uranium resources and almost 1.9% of its gas resources.

The most pressing challenge in this direction is that coal-fired power plants have not been phased out at the pace originally planned in the energy policy, leading to surplus generation capacity and low wholesale prices. This can possibly slow down the fast growth of renewable technologies.

Chatterjee concludes: “The government will therefore have to create a policy environment that will expedite the decommissioning of coal-fired power plants, thus setting the way for a smooth development of renewables.”