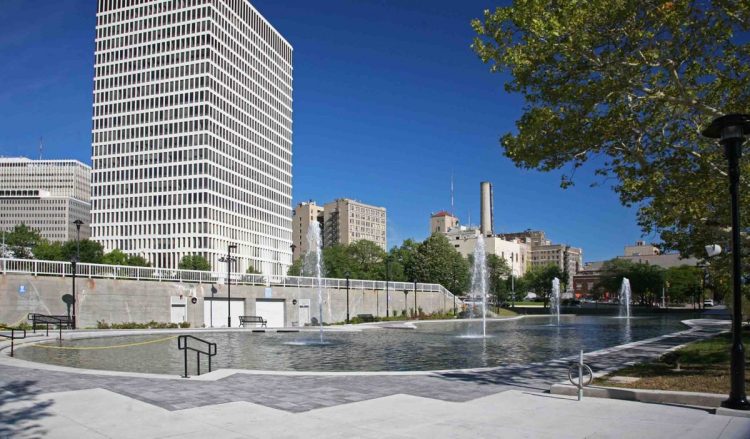 The project teams were honored by the American Council of Engineering Companies (ACEC) of New York in its annual 2019 Engineering Excellence Awards program.

In Rochester, Stantec’s local team led the restoration of a landmark park in the heart of downtown. Designed by modernist landscape architect Lawrence Halpin, the former Manhattan Square Park opened in 1974 to rave reviews.

Over the years, the park’s popularity waned and safety concerns arose. In 2000, the City of Rochester launched a three-phase renovation project for the five-acre site.  The program was completed this past summer when the park’s long dormant fountain sprang back to life.

The park, renamed Dr. Martin Luther King Jr. Memorial Park, received a 21st century makeover that retains its original design intent including water features and a sunken amphitheater. The playground received updated safety surfaces and new children’s tower and interactive sound producing metal sculptures. The iconic waterfall fountain was redesigned with a new energy efficient pump system and a simplified piping and control system. The ice rink was updated and redesigned to function as a reflecting pool in the summer.

Stantec’s Dwight Harrienger managed the restoration design from start to finish. He notes, “When the original park opened, it was hailed as a modern marvel.  Over time, the infrastructure showed normal wear and tear. The park is once again a popular venue for concerts, family events, and quiet visits. It’s a testament to the City’s perseverance to restore this great park and honoring our history. It has been a privilege to work on this project for 18 years,” said Harrienger.

Stantec received a Diamond (highest level) award in the Special Projects category. All Diamond Award projects are in contention for the Empire Award — given to the highest rated project in New York State, as well as recognition at the ACEC national level.

On November 11, 2018, the City of Rochester received a special citation preservation award  from the  Landmark Society of Western New York  for the restoration of the pools, fountains, and water features at Dr. Martin Luther King Jr Memorial Park.

In Albany, Stantec’s transportation planning team opened new vistas at popular Corning Riverfront Park.  The design reflects the community’s desires, including more parking, better connections from downtown to the park, enhanced safety, and improved access to and through the park for pedestrians and bicyclists.

The project was completed under budget and met the City’s aggressive schedule. The project is also seen as a catalyst to future downtown enhancements, including the Albany Skyway and Maiden Lane project, which will convert an underutilized ramp into a multi-modal linear park.

Stantec Project Manager Jeffrey Johns says, “We’re excited to be part of Albany’s waterfront enhancement initiatives and fortunate that the local community is so engaged and energized about the improvements that are planned and underway.” 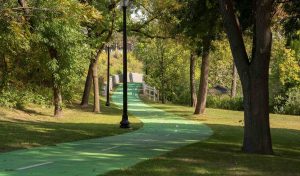 The Corning Riverfront Park enhancements earned a Gold Award in the Transportation category.

Each year, over 60 ACEC New York member firms submit projects that are judged on a rigorous set of criteria, which includes complexity, innovation and value to society. These projects are judged by a panel of industry experts, which includes military and government officials, ACEC National and International leadership, educators from college and university engineering departments, and leadership from other organizations dedicated to the built environment.

About Stantec
Communities are fundamental. Whether around the corner or across the globe, they provide a foundation, a sense of place and of belonging. That’s why at Stantec, we always design with community in mind. We’re designers, engineers, scientists, and project managers, innovating together at the intersection of community, creativity, and client relationships. Balancing these priorities results in projects that advance the quality of life in communities across the globe. Stantec trades on the TSX and the NYSE under the symbol STN.