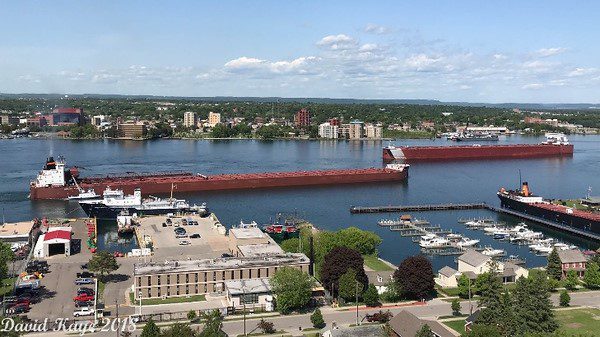 Legislation expected to lead to long-sought improvements and upgrades to the Soo Locks complex in Sault Ste. Marie, considered a vital linchpin to Michigan, the nation’s economy and national security, was signed into law by President Trump on Tuesday, Oct. 23, 2018, following approval in the U.S. Senate.

“That is very significant,” Kran said, explaining that currently only the Poe Lock, out of the four existing locks, is capable of accommodating ships larger than 730 feet. “Many of today’s cargo ships needing to make the 21-foot transition from Lake Superior to Lake Huron are in excess of a 1,000 feet. So if something were to go wrong with that one lock, the economic impact would be significant and immediate.”

According to Kran, the Soo Locks are a critical waterway, not only for agriculture, but for a majority of iron ore for the U.S. The Poe lock, the only lock capable of handling 1000-foot vessels, accounts for about 70 percent of shipments.

A Department of Homeland Security’s Office of Cyber and Infrastructure analysis concluded it was “hard to conceive” of a single piece of infrastructure more consequential than the Poe lock in terms of impact to the economy from an unexpected and sustained breakdown.

According to Kran, that report projected that a six-month closure of the Poe lock would bring steel production and manufacturing industries to an effective halt, with the ripple effects down the iron ore supply chain crippling the United States economy and costing 11 million jobs. The report concludes that the national unemployment rate would hit 11.3 percent, exceeding the 10 percent rate in October 2009 during the recession.

In a press release following Senate approval, Sen. Debbie Stabenow (D-MI) praised passage of the legislation which included her Soo Locks Modernization Act to authorize full funding for the modernization of the Soo Locks, including authorizing Congress to provide the necessary funding to construct another Poe-size lock.

Earlier this year, Senator Stabenow successfully called on the U.S. Army Corps of Engineers and the Administration to complete a critical economic analysis that accurately reflects the importance of this project to our economy and national security.

That Army Corps of Engineers Economic Reevaluation Report released earlier this year pegs the estimated cost of a replacement lock to be $922.4 million.

“After a hard-fought effort, the Senate passed my bipartisan bill greenlighting the nearly $1 billion needed to modernize the Soo Locks, Stabenow said. “In Michigan, we know how vital the Locks are to our economy and our national defense. We also know that we are on borrowed time until something happens that shuts them down.”