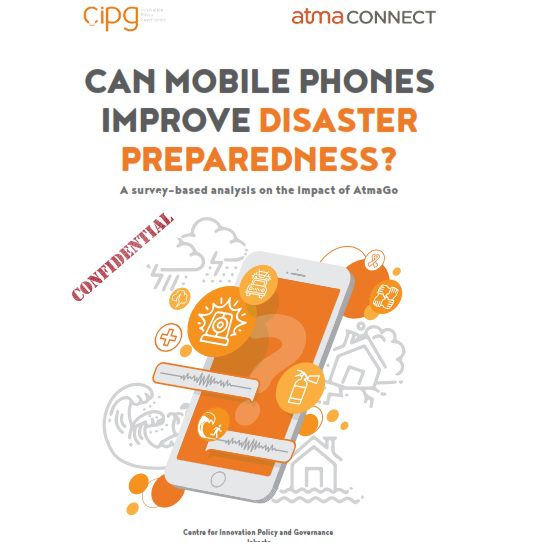 San Francisco, SOCAP – A new study released today found that being connected to your neighbors via a trusted social network during a natural disaster can save lives, decrease chances of injury and reduce economic loss.

Can Mobile Phones Improve Disaster Preparedness? was independently conducted by the Centre for Innovation Policy and Governance (CIPG) in Indonesia and released today at the Social Capital Markets (SOCAP) conference by Atma Connect, a San Francisco-based technology nonprofit dedicated to improving community resilience and disaster preparedness around the world. They created the social networking tool that was evaluated in the study, AtmaGo, currently used by 1 million people in Indonesia and soon to be introduced in Puerto Rico.

“Communities that are better connected experience lower mortality, morbidity, and economic losses in disaster,” said Meena Palaniappan, CEO of Atma Connect. “Being connected to your neighbors is a powerful resilience tool that is underutilized. We are trying to change that.”

The study on the impact of AtmaGo found that by getting government and community disaster alerts directly to people’s mobile phones on a trusted platform, along with crowdsourced information on what to do and where to find help, users were able to better defend their communities, safeguard their property, reduce injury and prevent deaths from floods, fires and other natural disasters.

When there is not an emergency, the study also found that people use AtmaGo to share information about roads and infrastructure, job fairs, entrepreneurship, and government services, building trust and familiarity with the app among users so that it’s easier to use when they need it most.

The study surveyed over 350 AtmaGo users and non-users in the greater Jakarta area in 2017. Based on household surveys with residents in Jakarta, CIPG quantified the per household impact of economic losses, deaths, and injuries in disasters over the last 5 years, and also quantified the impacts AtmaGo was having. Highlights of the findings include:

–          30% of AtmaGo users who received flood warnings took preventative actions, such as moving valuables, evacuating to a higher floor, planning alternative escape routes or warning their neighbors (this is compared to 18% of Facebook users as reported in another study)

–          Based on household economic losses residents reported in past disasters, AtmaGo could reduce property damage from disasters by $324 per household for Jakarta residents and health care costs by $14 per household per year, assuming effective action reduces impact by 50%. At a reach of 10% of Jakarta’s populations, this translates to a savings of $106 million in avoided damages, and $4.7 million in avoided healthcare costs per year. These costs are significant as the average resident of Jakarta spends only $532 on expenses per year.

–          AtmaGo adds an estimated 643 years of healthy life per 100,000 people by providing users with information to more easily evacuate, change their routes, and escape hazards such as flooding. This is based on the findings of the study, reported deaths and disability from previous disasters, and by estimating a 50% effectiveness rate.

–          68% of users reported sharing posts from AtmaGo with an average of 28 other people, highlighting the ability of the app to quickly and efficiently spread emergency news and information.

–          AtmaGo was also useful in gathering people to conduct disaster-related activities that reduce impacts of disaster. For example, 31% of users reported using AtmaGo to invite neighbors to pre- and post-disaster activities like clearing storm-water drains to reduce flooding, and post-disaster clean ups after a flood.

“It’s rare to have concrete evidence of how tools like AtmaGo are used on the ground, especially in a disaster setting,” said Wirawan Aghari from CIPG, that conducted the study. “Having this cost-benefit analysis not only proves that this type of app works, but will only help increase its positive impact in years to come.”

After the 7.5 magnitude earthquake and Tsunami in Sulawesi, Indonesia on September 28 that caused more than 2,000 deaths and hundreds of thousands displaced, users posted on AtmaGo to alert friends, family, and neighbors about the disaster. Ella Naila used AtmaGo to offer her home as a makeshift command center for up to 50 humanitarian workers. Thousands saw posts about how to get food, water, and healthcare, catch fish for protein intake, and prevent against mosquito borne illness. Similarly, following the 7.0 earthquake that hit Lombok, Indonesia on August 4, 2018, AtmaGo users relied on the platform for immediate access to breaking news, with posts sharing information on the locations of temporary housing. Similar apps were used to help connect people during Hurricane Florence in North and South Carolina.

“The long-standing partnership between Qualcomm Wireless Reach and Atma Connect highlights the critical role of mobile phones and 3G and 4G/LTE networks together with platforms like AtmaGo both for saving lives and property in disasters and for building community connectedness,” said Angela Baker, Director of Corporate Responsibility for Qualcomm.

After Hurricane Harvey a writer for the Houston Chronicle wrote: “The most important advice I can give is to get to know your neighbors today. When things get grim, it doesn’t matter how different you are or what political sign you have that is now submerged in water. They will help you if you need help, and you will help them.”

Atma Connect is currently operating in 78 locations in Indonesia and is planning to expand to Puerto Rico in partnership with Mercy Corps to help residents rebuild after the continuing devastation of Hurricane Maria.