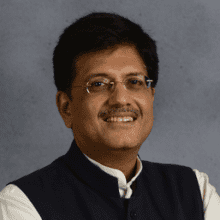 Penn’s top energy policy award—the Carnot Prize—will be given to the Honorable Shri Piyush Goyal, India’s former minister of power and renewables and current minister of railways and coal.

During his tenure, Goyal directed a fast-track effort to electrify 18,000 villages in remote parts of India—helping bridge the country’s vast energy divide.

The award ceremony kicks off with a lecture by Penn engineering professor Aaswath Raman, entitled: “Harnessing the Cold of Outer Space as a Natural Resource.” Raman’s Ted talk on this topic has received more than one million views. Following Raman’s lecture, Goyal will receive this year’s Carnot Prize.

The Carnot Prize is named in memory of French scientist Sadi Carnot, who in 1824 published Reflections on the Motive Power of Fire, which is recognized as the first statement of what is now known as the second law of thermodynamics. Carnot recognized that the power of the steam engine would produce a great revolution in human development. The Carnot Prize is intended to honor those leading revolutions in energy policy to further progress and prosperity.

The Kleinman Center for Energy Policy operates within the School of Design at the University of Pennsylvania. Its mission is to create the conditions for policy innovation that support a just and efficient transition to sustainable energy