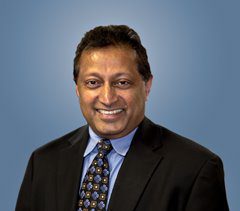 Parul Dubey on October 18, 2018 - in News, People
SANTA ANA, Calif. – C. Yoga Chandran, PhD, PE, GE, has joined HNTB Corporation in Southern California as project director and vice president. Based in HNTB’s Santa Ana office, Chandran is supporting the firm’s work on some of the most complex infrastructure projects throughout the region.

Chandran brings more than 30 years of experience in a broad range of technically challenging engineering projects, including project management, planning, design, project assessment and environmental documents, bid documents and seismic analysis. He has served in key roles on tunnel and geotechnical studies for both highway and transit tunnels.

“Dr. Chandran’s is an accomplished professional whose broad range of infrastructure expertise significantly benefits our Southern California transportation clients,” said Tom Ellis, PE, HNTB Southern California office leader and senior vice president. “With his demonstrated project management and leadership skills, he is a valuable asset to our expanding team of professionals working on many of the region’s most visible projects.”

Prior to joining HNTB, Chandran worked for another engineering firm where he managed projects for the City of Los Angeles, Los Angeles County Metropolitan Transportation Authority and Caltrans District 7. Chandran served as the overall program manager for the $900 million Bridge Improvement Program for the City of Los Angeles and assisted the city to obtain the project approval and environmental document for the $400M Sixth Street Bridge Replacement project. Chandran led the effort as the project manager on the Caltrans I-710 Tunnel Technical study to evaluate the feasibility of using a bored tunnel to close the gap on I-710, between I-10 and I-210.  For LA Metro, Chandran served as the project manager for the highly complex I-710 North Project to obtain Project Approval and Environmental Document, by evaluating multimodal alternatives to alleviate congestion in western San Gabriel Valley and east/northeast Los Angeles, a study area that covered 100 square miles. Chandran worked closely with both Metro and Caltrans District 7 to deliver the Draft Environmental document in little over two years, a major accomplishment for a project with such complexity.

Chandran is a licensed professional engineer and a registered geotechnical engineer in California. He earned his M.S. and Ph.D. in Geotechnical Engineering from the University of California, Davis.

HNTB is a leading infrastructure solutions firm in the U.S., with roots to the West since beginning work on Pasadena’s Arroyo Seco Bridge in 1914, the firm’s first year of operation. HNTB has since been involved in some of the region’s most high-profile, complex infrastructure programs that are reshaping the West, including the Interstate 405 Sepulveda Pass Improvements project, the Tom Bradley International Terminal Expansion for Los Angeles World Airports; and the “Green Build” expansion at San Diego International Airport.

About HNTB
HNTB Corporation is an employee-owned infrastructure solutions firm serving public and private owners and contractors. HNTB’s work in California dates back to its founding in 1914. Today, HNTB continues to grow in size and service offerings to clients in California from eight office locations, currently employing more than 350 full-time professionals. With more than a century of service, HNTB understands the life cycle of infrastructure and addresses clients’ most complex technical, financial and operational challenges. Professionals nationwide deliver a full range of infrastructure-related services, including award-winning planning, design, program management and construction management. For more information, visit www.hntb.com.