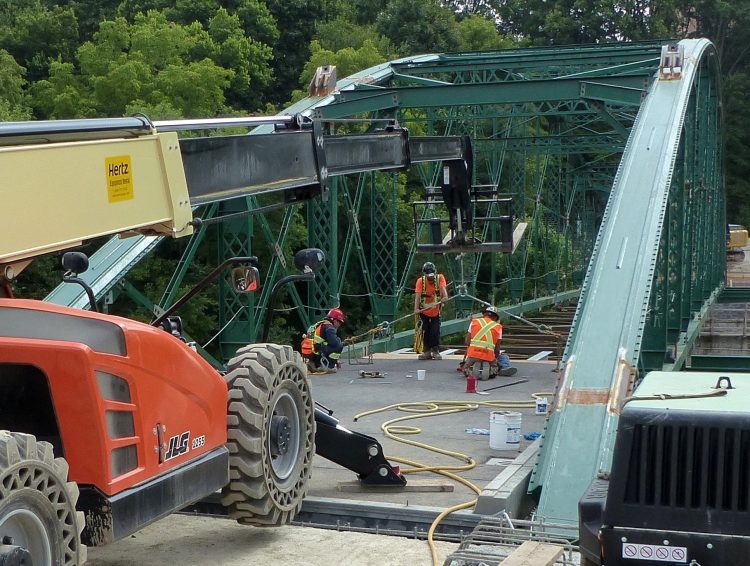 “FRP panels are 80 percent lighter than reinforced concrete panels,” says Composite Advantage President Scott Reeve. “The goal was to preserve as many of the original components as possible such as the structure’s arches, lattice work and pedestrian railing.  The design flexibility of FRP allowed us to mesh advanced composite material with Blackfriar’s original components to retain the beauty of the architecture while giving it long-lasting performance.”

FiberSPAN deck panels constructed as a series of closely spaced I-beams.   Panels met an L/500 deflection.  Bending strain/shear strain was less than 20 percent under the service load plus dead load. Minimum fatigue life was rated at 2,000,000 cycles. Panels were designed to a temperature differential of 60 Celsius. The design allows the bridge deck to move independently of steel beams in the longitudinal direction.

The 221.5-ft. long FRP deck was installed on Blackfriars’ rehabilitated steel truss. Direct bolting of the 17.5 ft-wide panels was designed to handle braking loads while connection clips resist uplift and lateral movement of the bridge. Panel widths ranged from 7 in. to 9 in. thick with a molded in crown. Curbs, integrally molded into the FRP deck, were covered with 3/8 in. thick 304 stainless steel plates to protect from wheel impacts and snow plows. The FRP deck was given a dark aluminum oxide wear surface. The large prefabricated FRP panels eliminate the labor and hours associated with assembling multiple pieces or pouring concrete.

“Blackfriars Bridge is a key corridor into our downtown and a link to our local cycling network,” says Doug MacRae, Director of Roads and Transportation, City of London. “We selected FRP decking for the Blackfriars Bridge rehabilitation project for its durability and corrosion-resistant qualities. We wanted a material that would reduce the amount of maintenance work needed once the bridge was reopened to pedestrians, cyclists and motorists.”