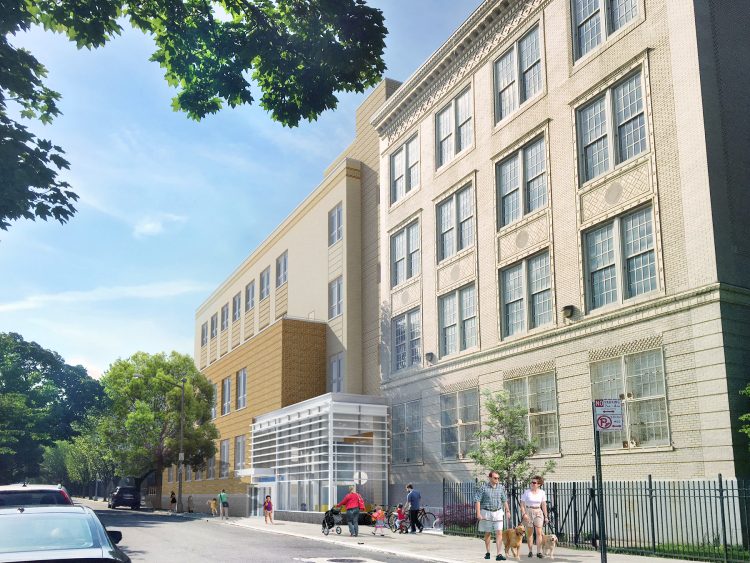 The $52.4 million, four-story addition to P.S. 144Q in Queens, NY will house 26 new classrooms, an outdoor play area, a cafeteria, offices, and a medical suite. Rendering courtesy of Urbahn Architects

Queens, NY – The New York City School Construction Authority (SCA), Urbahn Architects, and general contractor MPCC Corp. have reached the important construction milestone of ‘topping out’ – or completing the structural steel frame – for the Public School 144 addition. Located at 93-02 69th Avenue in the Forest Hills section of Queens, New York, the addition will accommodate the growing enrollment in the elementary school, also known as the Colonel Jeromus Remsen School, which currently serves 894 students in grades Pre-K to 5. 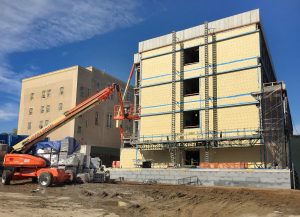 According to Urbahn Principal and Designer, Martin D. Stein, AIA, “The new building will accommodate 590 students and address functional deficiencies of the existing school. The expansion will also eliminate the need for the currently used temporary modular, outdoor classroom facilities. The project was designed to address the school’s needs in the most cost-effective manner and to minimize the extent of renovations to the existing building, which will continue to operate during construction.”

The addition is designed in accordance with the NYC Green Schools Guide and Rating System, which specifies energy efficiency and healthy-environment requirements for New York City public schools.

In addition to the SCA, Urbahn Architects, and MPCC, the project team includes structural engineer

The addition will be adjacent to the four-floor, L-shaped original school from 1931, which sits on a 2.1-acre site. The two buildings will be connected on all four floors through expansion joints. The elevations of floors in both structures will match and the project team will convert current window openings at the ends of the existing school’s corridors into doors that will seamlessly connect hallways in both buildings.

The exterior materials for the new building will be similar to those used on the original building, and are to include brick, granite cladding at the base of building, and cast stone for window sills and parapet caps. The engineering design includes a steel-frame structure with concrete floor slabs on metal decking for the upper floors, and concrete spread-footing foundation with retaining walls in the cellar.

“In addition to accommodating the school’s functional and programmatic needs, Urbahn’s architectural team has focused on insuring that the design of the new building respects both the look of the existing school and the scale of the surrounding single-family home residential neighborhood. In order to visually reduce the perceived scale of the addition, we incorporated a two-story brick portion into the June Street façade. It features a contrasting brick color to draw attention to the smaller scale of the lower portion,” said Urbahn Designer and Principal, Martin D. Stein, AIA.

The new addition will house 26 classrooms, an outdoor early childhood playground, a cafeteria and kitchen, an administrative office suite, and a medical suite. In addition, the scope of work includes improvements to the existing school building, including the replacement of doorknobs with ADA-compliant door latches; ADA-related relocations and renovations of bathrooms; upgrades to an exercise room, a guidance suite, auditorium, and four classrooms; and the installation of an inclined chair lift to provide accessibility to the lower area of the existing building’s third floor. The school will also receive new ADA-compliant water fountains, all of which will feature bottle-filling stations.

The project will create a new ADA-compliant entrance and lobby that will serve the entire expanded school that will be located on Juno Street, as well as adding two elevators. The entrance lobby will have a large glass-and-metal storefront and broad open stairs to the first floor level and down to the student dining room/cafeteria level.

The cellar of the new addition will house both a dining room and a kitchen. An all-new administrative office suite will be located on the first floor. The first and second floors will house Pre-Kindergarten and Kindergarten classes. The third and fourth floors will provide classrooms for second and fourth graders.

The student dining room, which is almost entirely below grade, will be treated acoustically at the ceiling and walls to dampen noise within the space. The cafeteria’s ceiling will feature a simulated skylight using daylight-hued LED lighting fixtures. The ceiling will be treated as floating islands to reduce the scale of the space and create visual divisions of this large open space

The addition will be heated, ventilated, and air conditioned via a combination of single-zone VAV rooftop units for public-assembly spaces, and cooling and heating via integral fin-tube induced ventilation units for instructional spaces. Gas-fired condensing-type boilers located in a mechanical equipment room will provide hot water. A rooftop modular-cooled unit will supply chilled water. The lighting system is equipped with LED fixtures and occupancy sensors, to minimize the energy use.

Urbahn Architects is a full-service planning and design firm based in New York City. Since its founding in 1945, the firm has designed projects for organizations and institutions that operate in the education, science, residential, healthcare, justice, transportation, and infrastructure sectors. Urbahn served as the architect for some of the nation’s most iconic structures, including the Vehicle Assembly Building and Launch Control at Kennedy Space Center in Cape Canaveral, FL, and the Fermi National Accelerator Lab in Batavia, IL. The annual value of Urbahn’s current domestic and international projects exceeds $500 million.