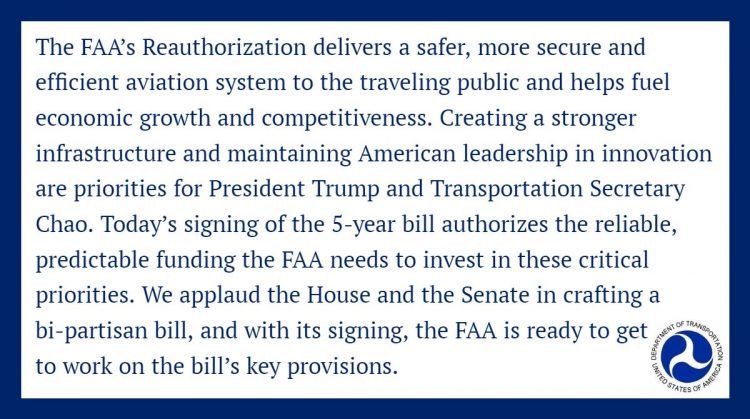 Washington, D.C. – Today, the President signed into law a measure (H.R. 302) that includes a major five-year reauthorization of the Federal Aviation Administration (FAA), as well as a package of federal disaster program reforms that will save lives and reduce the growing cost impacts of disasters of all types.

“Thanks to this new law, our Nation’s aviation programs will have the longest period of stability since 1982, and resilience to disaster will improve for communities across America,” said Transportation and Infrastructure Committee Chairman Bill Shuster (R-PA).  “The many reforms in this law will help strengthen American leadership in aviation, create jobs, and improve safety and service for passengers.  The law also shifts disaster programs to focus more on proactive actions that will help protect lives and property from flooding, hurricanes, fires, and other catastrophes.  I was proud to be joined by my father at the White House today as the President signed this bill into law.”

“This important legislation provides the FAA with the long-term funding it needs to carry out its safety mission and guarantees that the United States will continue to lead the world in all things aviation,” said Transportation and Infrastructure Committee Ranking Member Peter DeFazio (D-OR).  “This legislation will improve aviation safety and the air travel experience for more than 900 million passengers who fly in the United States each year.  In addition, the Disaster Recovery Reform Act, which was also included in the legislation, will help communities struggling to recover from disasters and ensure we are building more resilient communities that can withstand major disasters in the future.  I applaud my House and Senate colleagues for their hard work to get this legislation signed into law.”

“With President Trump’s signature of a five-year FAA reauthorization into law, we have helped ensure America maintains a safe, strong, and competitive aviation system,” said Aviation Subcommittee Chairman Frank LoBiondo (R-NJ).  “This law provides long-term stability at the FAA, allowing critical research programs including those at South Jersey’s FAA Technical Center, to continue without interruption while advancing the Nation’s aviation interests and safety in the skies.”

“Last year, 26.4 million Americans were affected by disaster, and countless lives were lost,” said Economic Development, Public Buildings, and Emergency Management Subcommittee Chairman Lou Barletta (R-PA).  “With the Disaster Recovery Reform Act now law, we can invest in making our communities safer and more resilient before disaster strikes.  After passing the House three times, I’m glad the Senate recognized the critical need for this bipartisan legislation, and I applaud President Trump for signing it into law.”

“Hurricane Florence’s impacts on the Carolinas and the ongoing battles against wildfires in the West are just the latest examples of the growing risks our communities face from natural disasters,” said Economic Development, Public Buildings, and Emergency Management Subcommittee Ranking Member Dina Titus (D-NV).  “DRRA brings about some critical reforms to assist communities become more resilient and better prepared to deal with the impacts of global climate change.  In particular, I am happy to see some reforms that will help persons with disabilities rebuild accessibility-related infrastructure, such as ramps, which can be quite costly.  As we know, animals and pets are also at risk in these disasters.  I am pleased to see provisions included in this bill authorizing national veterinary emergency teams to deploy with urban search and rescue canine units and to aid communities and rescued animals.  Now we must ensure that these important programs are not just implemented, but receive the funding they deserve.”

H.R. 302 includes the FAA Reauthorization Act of 2018, which authorizes the FAA programs and federal grants for airport infrastructure for the next five years, promotes safety and American leadership in aviation and the aerospace industry, and improves the flying experience for passengers (more info).

Additional provisions of H.R. 302 include reauthorizations of the National Transportation Safety Board (NTSB) and the Transportation Security Administration (TSA), and supplemental appropriations for disaster relief.