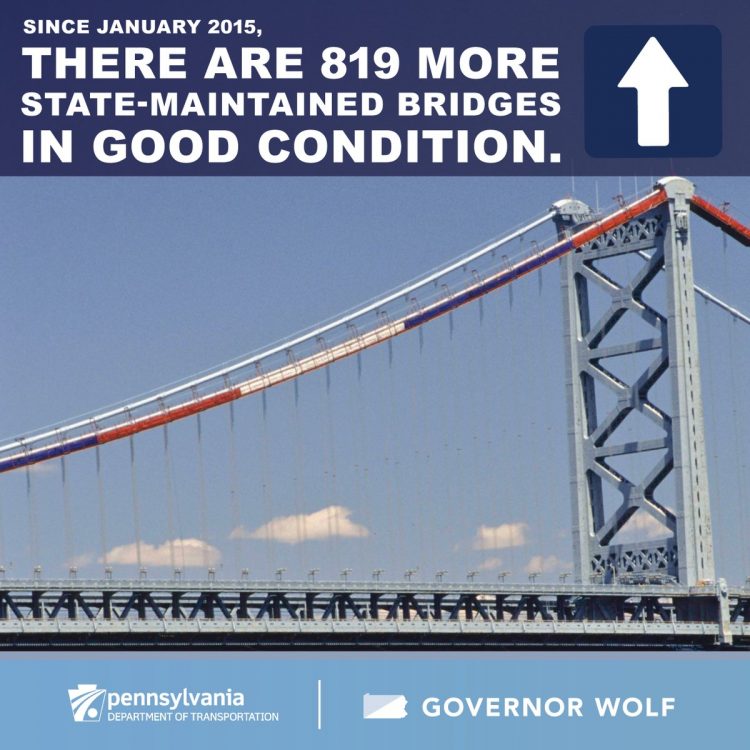 “Our roadways receive a lot of attention, but the safety of our bridges is also crucial to keeping goods and people moving in our communities,” Richards said. “We have many, very old bridges and we are doing everything we can to replace bridges when needed, while maintaining and preserving others to extend their useful life.”

PennDOT has long maintained quarterly, public updates of bridge conditions in the state, viewable on the “Bridges” page of the “Projects & Programs” section of www.penndot.gov. The new “Bridge Conditions” map allows the public and local and elected officials to easily see information on bridges in their communities.

“We have made great progress on state-maintained bridges, but we also have many bridges owned by counties and municipalities,” Richards said. “That’s why, in addition to liquid fuels funding distributed each year, the Wolf Administration included a local bridge partnership in our Road Maintenance and Preservation program.”

There are 6,414 locally owned bridges, of which 1,886 – or 29.4 percent – are in poor condition. This is a decrease from January 2015 when 34.1 percent were in poor condition, and the number in good condition has increased from 21.5 percent to 23.2 percent. The need to improve local bridges was underscored when the biennial Transportation Performance Report, assembled by PennDOT, the State Transportation Commission, and the Transportation Advisory Committee and viewable at www.TalkPATransportation.comOpens In A New Window, identified local bridges as the only category receiving a “low” performance rating.

Since March 2015, nearly $1.8 billion in municipal liquid fuels investments have been distributed to certified municipalities for local infrastructure needs such as maintaining roads and bridges, winter services, traffic control devices and more. Earlier this year, Governor Tom Wolf also announced a new program investing $50 million over five years to advance projects for locally owned bridges that are approved on the state’s Twelve Year Transportation Program. Additionally, the Wolf Administration’s Road Maintenance and Preservation, or Road MaP, initiative has made opportunities available for the 22 counties who have taken steps to enhance their transportation networks (PDF) by collecting the $5 vehicle registration fee enabled by Act 89 of 2013, the state transportation plan. Chester, Montgomery, Berks, Schuylkill, Bucks, York, Cumberland, and Cambria counties are leveraging the partnership for bridge projects in their counties.

The partnership has made available up to $2 million for each county that has passed a fee resolution, with a 50-percent local match commitment required to secure the program funding.

To learn more about bridges in Pennsylvania, including the department’s bridge-inspection procedures and more-detailed bridge-condition information, visit the Bridges page.