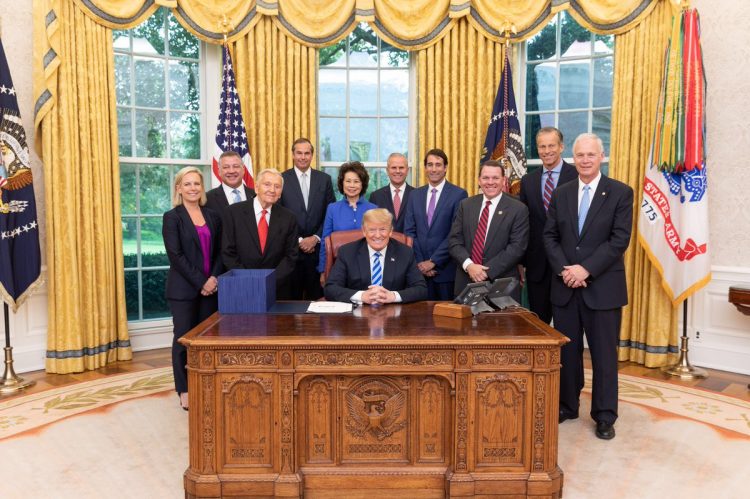 Washington, D.C. – Transportation and Infrastructure Committee Chairman Bill Shuster (R-PA) will be joined by his father and former Transportation and Infrastructure Chairman Bud Shuster in the Oval Office today as President Trump signs into law a bill that includes a major five-year reauthorization of the Federal Aviation Administration (FAA) and a package of life- and cost-saving disaster program reforms.

The President will sign H.R. 302 during a 2:45 PM signing ceremony at the White House.  Chairman Bill Shuster, who has led the Transportation and Infrastructure Committee since 2013, was the lead author of the legislation in the House of Representatives.

Today’s signing ceremony is historic for several reasons.  Bud Shuster, who chaired the same committee from 1995 to 2000, also shepherded a major FAA reauthorization into law during his tenure.  Both have represented Pennsylvania’s 9th Congressional District in the House of Representatives.  Today’s measure, H.R. 302, is also the longest reauthorization of the FAA since 1982.  Both Shusters have worked with President Trump: Chairman Bill Shuster has worked with the President to move today’s FAA measure and on other legislative efforts, and Chairman Bud Shuster worked on infrastructure issues with the president when the latter was in the private sector.

Furthermore, since John Quincy Adams and his son Charles Francis Adams both chaired the Committee on Manufactures in the 19th century, Bud and Bill Shuster are only the third father-son pair in our Nation’s history to chair the same House committee.  The other pair were Edward White Robertson and Samuel Matthews Robertson, who both chaired the Levees and Improvements of the Mississippi River Committee, also during the 19th century.

“Being able to stand in the Oval Office alongside my father, who once chaired the same committee that I now chair, while the President of the United States signs into law a major piece of infrastructure legislation is an incredible honor,” said Chairman Bill Shuster.  “I want to thank President Trump for signing this important bill into law and for inviting us to attend.  I also want to thank my colleagues in the House and the people of the 9th Congressional District of Pennsylvania for entrusting me to represent and serve them in Congress and as Committee Chairman.  Finally, I want to thank my family for their continued support, and my father, who after standing beside me for the last 57 years, will be standing beside me again today at the White House during this historic moment.”

H.R. 302 includes the FAA Reauthorization Act of 2018, which authorizes the FAA programs and federal grants for airport infrastructure for the next five years, promotes safety and American leadership in aviation and the aerospace industry, and improves the flying experience for passengers.  (more info)