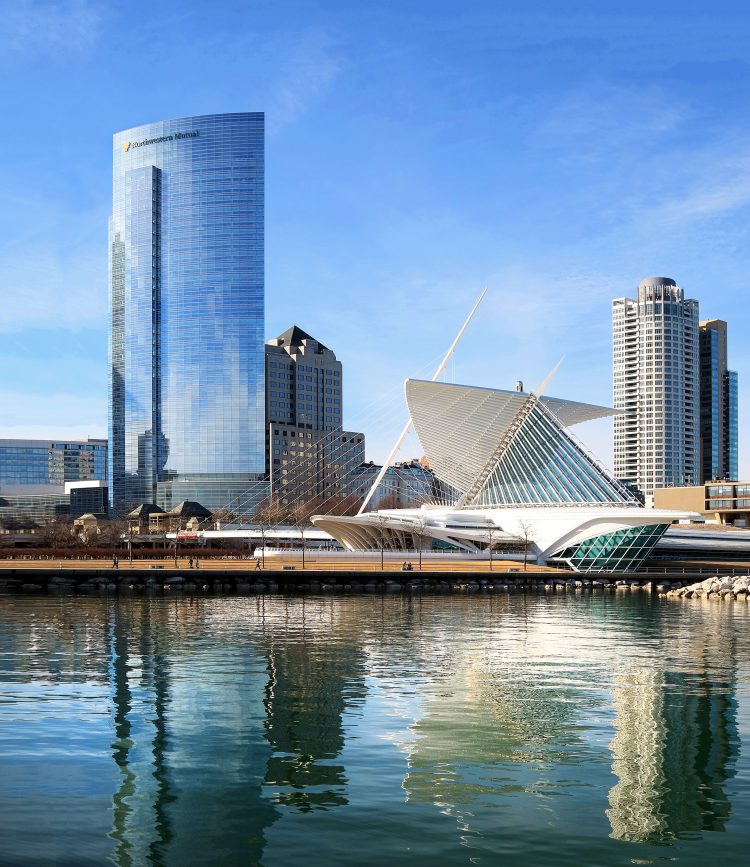 (New Haven, Conn.) – Pickard Chilton, an award-winning architecture studio best known for its innovative and cutting-edge design of corporate headquarters and campuses, announced that three of its recent projects each received a 2018 Americas Property Award for Commercial High-Rise Architecture. The three office towers, all developed by Hines, include 609 Main at Texas in Houston, Texas; River Point in Chicago, Illinois; and Northwestern Mutual Tower and Commons in Milwaukee, Wisconsin. Northwestern Mutual Tower and Commons and 609 Main were also recognized with Five Star awards, and, as a regional nominee, 609 Main may be additionally recognized with a Best in USA award that will be announced in December in London.

The Americas Property Awards are one of several regional competitions hosted by the International Property Awards, which, for the past 25 years, has celebrated the highest levels of achievement by companies operating in all sectors of the commercial and residential property and real estate industry. Projects are judged by an independent panel of 80 industry experts on elements such as design, quality, service, innovation, originality, and commitment to sustainability. Pickard Chilton and other honorees were recognized at the Americas Property Awards Gala Awards Presentation at the Toronto Marriott Downtown Eaton Center Hotel on September 20, 2018. 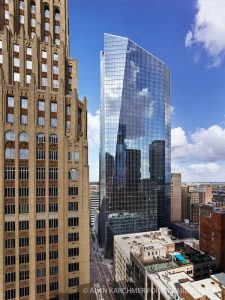 “Since the founding of our firm, we have partnered with superior architects who produce quality-designed buildings. We are proud to have worked with Pickard Chilton on these projects, and each winner is an outstanding example of design, functionality, efficiency, ingenuity and collaboration,” said Jerry Lea, Executive Vice President, Conceptual Construction at Hines, the developer of 609 Main, River Point and Northwestern Mutual Tower and Commons.

The 48-story, 1,850,000-square-foot 609 Main is a Class-A, next-generation office tower in Houston’s Central Business District. Considered one of the most ambitious skyscrapers developed in downtown Houston in years, the sustainably-designed tower includes an underfloor air system, ‘smart’ elevators, a sophisticated safety system, and flexible floor plates that allow daylight deep into the building. The tower will be clad in high performance floor-to-ceiling glass, offering panoramic views of greater Houston. In addition, the podium conceals parking for 1500 cars and features an expansive roof terrace.

609 Main’s prestigious tenant roster includes United Airlines, which has brought together 1,400 employees from other offices.

River Point, a 52-story corporate tower and 1.5-acre, terraced public park is located in Chicago’s bustling downtown, overlooking the confluence of the main, north and south branches of the Chicago River. The LEED-CS Gold certified project also includes sustainable design features such as low-flow water fixtures, a 50% green roof, and native landscaping. In addition to this recognition, the project has also been recognized by the Structural Engineers Association of Illinois, the Connecticut Green Building Council and the Chicago Building Congress.  It received an American Architecture Award in 2018 and was a finalist for the Urban Land Institute’s 2017 Global Awards for Excellence. 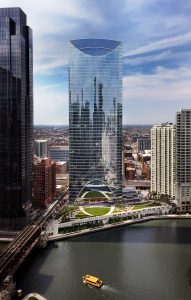 The Northwestern Mutual Tower and Commons create a high-performance urban campus that engages employees and the city of Milwaukee, while embodying Northwestern Mutual’s longstanding values.  Implementing best practices in workplace design, the elegant thirty-two story glass office tower’s gently curved form at the eastern edge of the campus embraces the gardens and maximizes panoramic views.  As the heart of the project, the Commons creates a cohesive, clearly organized campus that provides training facilities, meeting spaces, dining, and terraces overlooking their enhanced gardens. Nestled in the historic 1914 headquarters, a skylit atrium knits together the old with the new. The three-acre gardens and pedestrian-oriented streetscapes have reinvigorated the lakefront district’s urban vitality. The project was previously recognized with the City of Milwaukee Mayor’s Design award.

Pickard Chilton is an international architectural practice noted for its expertise in the design of large, complex and often high-profile buildings including corporate headquarters, high-rise commercial office towers, hotels, and academic and health care facilities. The firm’s layered perspective informs all of its work, presenting clients with a sophisticated, knowledge-based approach that emphasizes design vision, integrity, a focus on client objectives, and exceptional service. Headquartered in New Haven, Conn., the firm’s recent completed projects include: Northwestern Mutual Tower and Commons in Milwaukee, Wisconsin; River Point in Chicago, Illinois; 609 Main in Houston, Texas; ATCO Commercial Centre in Calgary, Alberta; and 1144 Fifteenth in Denver, Colorado. Current projects include 2+U in Seattle, Washington; 145 Broadway in Cambridge, Massachusetts; Canal Place for Dominion Energy in Richmond, Va.; and a mixed-use project in Tampa, Fla.; as well as commercial and residential developments in Austin, Atlanta, Dallas, Houston, Miamiand Tokyo, Japan. Please visit www.pickardchilton.com for more information.