GreenBlu’s stand-alone module deployed with solar collectors can produce 16000 gal/day using a 5000 sq. ft. footprint. A one million gallon per day plant, enough for a town of 20,000, would require 63 containers and shade the parking lot of a standard big-box retail store.

HAMILTON, N.J. – GreenBlu, Inc., a water technology company commercializing a new thermal distillation technology, Vapor Adsorption Distillation with Energy Recycling (VADER), announced it is beginning its $1,600,000 award from the U.S. Department of Energy’s Solar Energy Technologies Office (SETO). The goal is to advance solar-thermal desalination technologies by reducing the cost and expanding the market for creating freshwater from unusable waters. This award will advance GreenBlu’s VADER technology, culminating with a prototype of the commercial product. 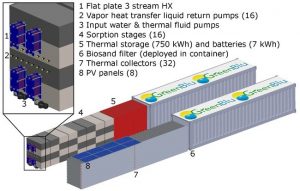 GreenBlu’s envisioned modular, grid-independent adsorption distiller can be containerized or skid-packed, goes anywhere, and scales to any size.

“The SETO award will allow us to build a prototype proving not only the efficacy of our new distillation method, but also that desalination can be free from drawbacks,” said Dr. Howard Yuh, CEO and co-founder of GreenBlu.

Prevailing methods of desalination are either fully electrically-powered or use both electricity and thermal energy. These methods cannot be deployed at-scale to solve global water scarcity due to cost, dependence on electrical infrastructure, carbon emissions, and brine discharge. Increased electricity demand from the rapid growth of conventional desalination will exacerbate both climate change and water-energy nexus challenges. Stakeholder interviews show that GreenBlu’s carbon-free, heat-powered, grid-independent desalination products will be welcomed in the marketplace.

Applications of GreenBlu’s adsorption technology includes:  1) a distributed desalination network, 2) boosting output from current facilities, and 3) providing sustainable magnesium. GreenBlu’s modular product will be packaged in shipping containers and provide low-cost, zero-discharge desalination with the capability of recovering magnesium chloride and sodium chloride salts from both seawater and waste brine.

SETO has selected 14 projects in its Solar Desalination program to reduce the cost of solar-thermal desalination. Electricity costs account for up to half of the operating expenses and require plants to be grid-connected. Using solar-thermal power and low-cost components for integrated designs can enable smaller, more portable systems and expand access to desalination technologies.

“We are very intrigued by the promise of your container-based distillation system to utilize abundant and cost-effective local energy resources…to produce pure water for drinking or industry. Moving away from diesel-driven and chemical-dependent water treatment will not only improve the health of our customers, reduce their dependence on expensive imported fuel, but also reduce the cost of water,” commented Bruno Pontierno, President of Roma Caribbean Hotel and Restaurant Supply Ltd.

GreenBlu was founded in 2016 to commercialize the best adsorption desalination technology, based on the belief that adapting to climate change should not worsen climate change. We are passionate about developing the next-generation zero-compromise desalination technology that is affordable for everyone. The GreenBlu team has garnered several awards, including the 2016 CleanTech Open Northeast business accelerator, the Water Distinction prize at the 2017 CleanTech Global Forum, the UC Berkeley Haas School of Business Cleantech to Market (C2M) 2017 program, and a 2017 Bureau of Reclamation Desalination and  Water Purification Research grant.