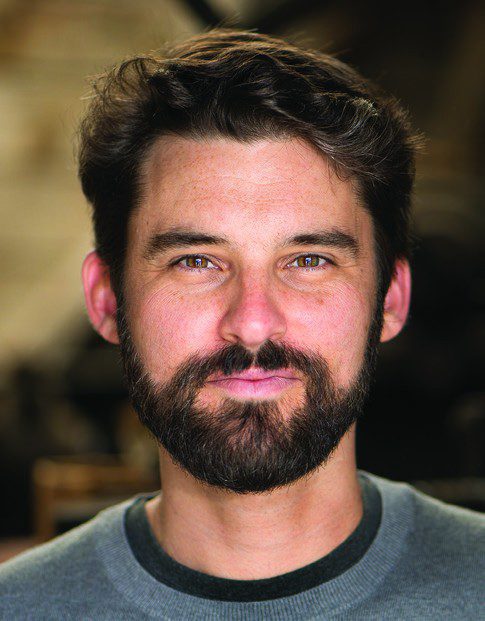 This page profiles innovative and impactful applied research and development in civil and structural engineering to spur continuing thought and dialog to create a better industry. These profiles are based on interviews, and the opinions and statements are those of the subject and are not necessarily shared or endorsed by this publication.

Curtis Tongue is the chief marketing officer and co-founder of OhmConnect , which works with California’s energy providers to allow residents to earn cash-back rewards for their real-time household energy savings.

V1 Media: Please provide a brief of your education and career before OhmConnect.

Tongue: I studied genetics back in school, back at Berkeley, but took a “quick left turn at Albuquerque,” so to speak, and focused on branding and user design and user experience. So when Matt Duesterberg, our CEO and co-founder, and I started working together at OhmConnect, we were able to bring together a unique perspective. Matt came with a really robust, rich background on energy trading. I applied a user-centric design process, which I think was unique, and still is unique, within the energy industry. Energy is typically an “out of sight, out of mind” issue for a lot of folks. So being able to address that from a very consumer-first perspective, I think, is a real testament to why we’ve been so successful here.

V1 Media: What does OhmConnect do and/or provide? What is your role with them?

Tongue: We pay people to save energy, and there are three key things that benefit from our program: The first is people, second is the planet, and third is the grid’s pocketbook. For everyday folks, the benefit is two-fold: First, people don’t realize that there’s real financial value in saving energy at specific times during the week. Here’s what the user experience for OhmConnect looks like: you get a text message, you save energy for the next hour, then you receive a payment from us–a direct payment. These aren’t savings on a utility bill; OhmConnect will pay you cash.

The second benefit is environmental. Our community saves energy when the grid is most at risk of turning on the most environmentally damaging power plants across the grid. These are called “peaker plants”; and they’re typically old, outdated, inefficient, natural-gas plants that literally kind of throw natural gas on a turbine–a lot of pollution. We help offset the need for those power plants.

The third beneficiary is the grid. It’s cheaper to save energy rather than pour more natural gas into those power plants. So we help reduce the overall cost of electricity to California.

As a quick aside, with the exploding “smart home” markets, users don’t have to use smart devices when using our service, but a lot of folks have found that if they connect a Wi-Fi thermostat–if they connect a smart plug like Falcon, Ecobee, Honeywell–they can automate the entire process; they can automate the energy-saving program. So users are starting to find that, in a smart home, instead of just providing convenience, their smart home actually can start delivering cash rewards to those users.

One of the most impressive things we’ve done is really engage people and pique their interest in energy. And we put a program in front of this that really gets people emotionally invested in energy use. Thinking back on the history of OhmConnect and how the product and experience has developed, I think we should have made this insight much earlier. We found that it’s the emotional benefit that people are looking for most. We had this assumption that people would see Ohm Hours (the name for our energy saving events) as an inconvenience: “sure, I’ll save energy for an hour if that means I can get paid for it.”

But what we found is actually the opposite. When we asked people “how many Ohm Hours do you want to get per week?” people just cranked it up to the max. So we really started to peel back on the motivations behind it, and why people wanted to get more involved. It wasn’t just that they wanted to earn more money; they saw Ohm Hours as a means, and a catalyst almost, to disconnect their families from the screens–from TV–to reconnect with the family, play board games, go outside, all while making a positive environmental impact.

V1 Media: Could you be more specific on your role in this process?

Tongue: As chief marketing officer, I’m really focused on growth: how do we contextualize this for users, how can we spread the word throughout California, while keeping a close eye on that user experience.

V1 Media: Can you describe the relationship between the state of California, the OhmConnect service and end users?

Tongue: When the grid is stressed, California would prefer to pay people to save energy, rather than pay a power plant to produce more. It’s cheaper, cleaner and puts money back in the pockets of residents; it’s a win-win. So let’s say that a home is expected to consume 3 kilowatt hours from 6 to 7 p.m. tonight. But they get a notification, and they only end up using 2 kilowatt hours. So they end up saving 1 kilowatt hour compared to what they would have normally used. California’s electricity market, called the California ISO [Independent System Operators], is the entity that manages the grid and tells each power plant “we’re going to need X amount of energy.” That’s the market that will actually pay users for saving that 1 kilowatt hour of energy.

V1 Media: So who is paying the users? ISO or OhmConnect directly?

The utilities (PG&E, SCE, SDGE) are ultimately the entity that purchases energy, just like they would purchase energy from other energy providers. We’re one of those generation sources they purchase from.

V1 Media: So if the service is free, and you’re the ones paying customers, who is paying OhmConnect?

Tongue: Our business model is pretty simple: From what the ISO grid pays us, we take a small commission. The majority of the energy payments are passed directly to our users.

Utilities are ultimately the entity that purchases energy; that purchase is managed by the market, the ISO. The majority of those payments go along directly to our users. And what users are paid is equivalent to how much energy they save. For the sign-up process, you connect your utility account to OhmConnect, which then can see how much energy your home uses on an hourly basis. If we see [a user] was able to save 1 kilowatt during this previous Ohm Hour, they’re going to get paid for saving that kilowatt. If another user were to save 2 kilowatts, and another user were to save 3 kilowatts, they would get paid two to three times as much. Everything is done on a very personalized basis.

V1 Media: Can you tell me how much California or the ISO is saving monetarily from this partnership? Or is it more about reducing pollution and energy use for non-financial benefits?

Tongue: From an environmental benefit, California has one of the most ambitious renewable energy goals in the nation; it’s called the California Renewable Portfolio Standard. One third of all energy in California needs to come from renewables by 2020, and 50 percent but 2030. And the utilities have done a phenomenal job in pushing us forward, and actually we’re just shy of already hitting that 2020 goal.

The utilities did a phenomenal job shifting their energy procurement to really lean on this portfolio standard goal, working on how to add more solar to the mix, how to add more wind to the mix. So 32 percent of California’s energy procurement now comes from renewable sources. Solar obviously comprises a really big mix, a really big part of that portfolio. But solar is intermittent; sometimes a cloud will drift overhead, and the sun sets every night, so there’s a drop in solar generation. That’s where OhmConnect comes into play. Instead of turning on those peaker plants, producing more pollution, a lot of emissions, we give the grid flexibility to call an Ohm Hour, and get people to save energy instead of turning on those dirty and inefficient power plants. California has been able to achieve about 200 megawatts in carbon-free energy savings through this program.

V1 Media: Do you have an estimate of how much California may be saving financially through this program?

V1 Media: Is OhmConnect involved directly in any community and/or student education?

Tongue: Education is a really big component of our program. On an individual level, we are one of the first programs that’s successfully gotten people interested in their energy usage, gets them to save at the times that matter most.

Users can cash out via PayPal, so they connect their PayPal accounts to OhmConnect, and they get paid automatically. Early on, we noticed there are many accounts all cashing out to the same PayPal address. So we did a little bit of digging, and found that this was a local school that decided to do some of its fundraising by having the community connect their school’s PTA PayPal account to their OhmConnect accounts. So when they saved at home, their PTA got a donation.

V1 Media: Is OhmConnect looking to take this model into other states?

Tongue: Absolutely. We’re very focused on continuing to grow within California, but there are other markets in other states that certainly are interesting. One of the requirements for OhmConnect is that users need smart meters, so we can get detailed, granular energy usage on a 50-minute or hourly basis. New York is rolling out its smart-meter program pretty aggressively. A lot of states in the Midwest also are rolling those out on aggressive timetables. California is definitely the farthest along. California probably has 80 to 90 percent rolled out with smart meters, but as more smart meters start to get deployed across other states, we’re taking a close look.

V1 Media: How do you think programs such as yours are having positive effects on the electrical energy infrastructure grid in general?

Tongue: In California, we have programs called Flex Alerts that occur when there’s a risk of “brownout.” There are real supply constraints–maybe there’s a big spike in demand, and there’s a risk that there’s not going to be enough electricity, there’s not going to be enough supply to meet people’s demands. Programs such as OhmConnect can quickly and effectively mitigate and smooth out some of the volatility in those supply/demand balances. So if there’s one of those constraints, instead of having to spool up one of the inefficient power plants and potentially damaging some parts of the grid, potentially from a transformer level, Ohm Hours can be deployed to keep the grid stable, keep the operations smooth, engage the community, and put the money back in the pockets of the residents.

Tongue: As more smart home devices are being deployed, and as we see more homes installing smart thermostats, electric cars and smart plugs, there’s a major opportunity. There are two big macro trends: One is the increase in user autonomy; an increase in user choice. They’re able to participate in the program they want. They’re able to participate in third-party programs that aren’t necessarily directly managed by their utility.

The second macro trend is “smart home and automation.” The overlap between the two has a lot of economic value; there’s a lot of environmental and climate-change value; and being able to more intelligently and smartly manage fleets of smart devices to reduce our carbon impact, to reduce costs to the grid, and also deliver real financial value back to users.