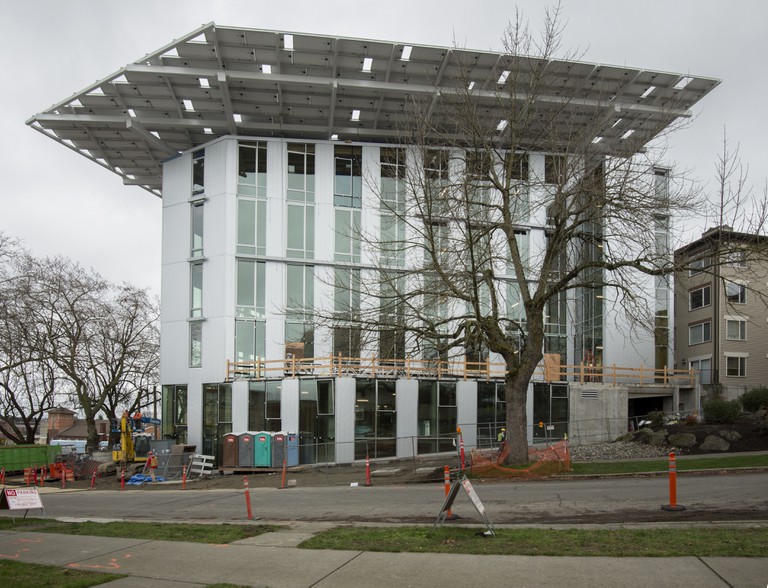 The Bullitt Foundation just opened the Bullitt Center on Earth Day, with designs to profoundly change the way buildings are designed and built. Denis Hayes realized that revolutionizing building practices could have a profound effect on energy consumption in the United States, with buildings responsible for a whopping 75% of the total electricity use and 42% of the nation’s CO² emissions. Construction in the US creates 136 million tons of waste annually. Globally, buildings consume about 40% of the world’s primary energy and contribute to 40% of the world’s carbon emissions, according to the Rockefeller Foundation and DB Climate Change Advisors.

Denis Hayes, with this bold vision, brought together a group of highly talented professionals in the architecture, engineering, and construction disciplines to rethink the process and find creative solutions to a series of challenges. The concentrated energy of the integrated team approach inspired innovative solutions throughout the design and construction of the Bullitt Center. The Foundation plans to share the research that went into this project with the public to foster future projects that will be more in harmony with our environment.

What appears as a remarkably sleek and simple building is actually the result of countless hours of debate and innovative problem-solving by all members of the team. With constant exchange between the disciplines to problem-solve, their combined skills, knowledge, and cooperative approach led from complexity to a refined simplicity. It is notable as one walks around the building, with solutions so elegant that they appear effortless, when in fact they represent countless hours of research, experiment, and creativity.

Denis had the vision and Chris Rogers of Point 32 knew how to make it happen. These two conceived of the project and found the site. The Living Building Challenge was chosen as the design paradigm for the project. This established a challenging set of rules that require a new way of thinking about constructing a building, asking us to think about how we build and live for tomorrow. Seattle’s Department of Planning and Development, engaged by the transformative potential of this project, initiated a new Living Building Pilot Program to help foster projects like the Bullitt Center, whose innovative systems might not otherwise meet the standard prescriptive code requirements.

Rob Pena, of the University of Washington’s Integrated Design Lab and an Associate Professor in the Department of Architecture, joined the team to define the scope and serve as an advisor. Rob led a design studio at the UW Department of Architecture to analyze the project. He also directed a study for the Bullitt Foundation to produce a list of potential architects and engineers for the project. Denis and Chris met with all 15 of the architecture firms proposed. After these interviews four final firms were selected to submit qualifications. A lengthy interview process followed with each of the four finalists. The Miller Hull Partnership was selected as the architect for the project. Schuchart was brought onto the team by Point 32 as the general contractor.

The first step in the design process was a two-day workshop held in June 2009 with approximately 45 specialists in the sustainable design field, including specialists from the Rocky Mountain Institute and the University of Washington, Alex Steffen of World Changing, Liz Dunn of Dunn & Hobbes, plus many additional consultants. After Chris Rogers and Denis Hayes presented their vision, each participant spoke to what they felt was most important about this project. The design team took in all the feedback from the remarkable gathering of experts in the room. At the end of this first day Steven Strong of Solar Design Associates and Craig Curtis of Miller Hull worked through the evening to tackle the toughest problem for this project–could we generate enough energy in sun-starved Seattle to power a 50,000sf office building? Solving the energy piece was always the major form driver. These two worked from a design concept to get to anestimated photovoltaic square footage of 14,000 ft² or 250,000kW/year. This translated to an original Energy Use Intensity (EUI) of 20 kBtu/ft² (which was later reduced even further). It was an exciting moment when they realized that this actually was in the realm of the possible. The two then came up with a sketch that was presented the following day. This initial sketch is amazingly true to the final building form.

The team considered two primary massing options – the Slot, with a west facing atrium and U-shaped building surrounding it, and the Courtyard, with a central atrium and naturally lit and ventilated spaces wrapped on all sides. After much analysis, the team settled on a third and more effective solution with a reduced skin to volume ratio. This final massing iteration is what we see today, with a 70-foot deep floor plate with central plumbing core and naturally daylit and ventilated spaces surrounding it.

From the start of the project, Denis asked the design team for an ‘irresistible stairway’ to keep people out of the elevator. The stairway would promote a healthier lifestyle for occupants and would foster a better sense of community within the building. As it stands today, the stair is so beautiful and the views so spectacular that the stair really has achieved the status of irresistible.

Throughout the initial study, Miller Hull used various software programs to analyze the impact of design changes. The team was looking for cost-effective solutions, always with performance in mind. Optimizing the massing for daylighting as well as optimizing the photovoltaic (PV) array for power generation were two key design drivers: the first to reduce energy consumption and the second to produce the energy needed to operate the building. Ben Dalton, a team member with Miller Hull, came up with a combination of Rhino for 3d modeling and Grasshopper for parametric control as a way to quickly test different PV configurations. The impact of changing quantities of panels and their orientation was then plugged into an analysis of the PV energy production. The power production and impact to daylighting were studied on dozens of formal configurations. Ecotect Analysis software was employed to study the daylighting in concert with Chris Meek at the Daylighting Lab at the UW Integrated Design Lab.

Because the project is located on a tight urban site with specific allowable height limits and complex geometry, the team wasn’t able to use PV panels in their optimal orientation, approximately 25 degrees from the horizontal and oriented to the south. Doing so would have required either a reduction in the achievable building areas below the array, or exceeding the city’s height limits. Instead the parametric modeling revealed that the best configuration that also met zoning requirements was a singular pitch roof plane at 10 degrees to the southwest and a large vertical array to the south. The vertical array, however, required costly support structure, compromised daylighting on the interior and was eventually dropped from the design. The solution was to add a few more roof panels, which generate significantly more power than vertical panels, and design in more efficient building systems. These changed further reduced the building EUI from 20 to 16.

Each week there was a meeting with the architects, owner, and contractor, as well as sub-contractors as needed. Working closely with the engineers, every change the architects made had to move closer to the performance target. The engineers examined the performance impact of each design change to understand its impact on the building performance. It is a systems-based design approach, both organic and science-based. Margaret Sprug noted that this was more of an integrated process with the engineers than on any other Miller Hull project she had worked on in her office, and Brian Court commented that this project is the first purely performance-driven design for the firm. From the outset in the late 1970’s, Miller Hull Partnership has been sensitive to the relationship between the land and design, but the Bullitt Center emphasized and elevated it. The project has had a big impact on the firm and Miller Hull now has a new tool kit of programs in Rhino and Grasshopper, and the process of performance-based design is influencing all current projects. Brian theorized that Miller Hull had been preparing for 30 years for a client like Denis and the Bullitt Foundation. So often architects find themselves in the role of trying to convince clients to do the right thing, but with the Bullitt Foundation, the commitment was already there.

A great design moment for Brian was the decision to use heavy timber. If the structure is going to be exposed, then wood is a beautiful solution. The team looked at concrete and steel but settled early on for heavy timber after looking at the embodied energy and relative carbon footprint of wood, concrete, and steel. Designing the building introduced the virtues of heavy timber construction in this day and age: low-embodied energy in the manufacture of a regional building material, the sequestering of carbon in the wood, and the regional character and beauty inherent in the product. To achieve true environmental performance by using wood, the quality of forest management matters. For the Bullitt Foundation (and the Living Building Challenge), only the Forest Stewardship Council sets the bar high enough, so 100% of the wood in the Bullitt Center is FSC certified. The City of Seattle hadn’t permitted a six-story Heavy Timber Type IV project in nearly eighty years but Miller Hull feels strongly that we will be seeing an increase in the number heavy timber structural systems in buildings of the future.

It is possible to wonder how accurate energy and performance modeling can be with a structure that is so revolutionary. Several strategies were used to ensure actual performance versus what the modeling predicts. There is a small margin for error built in. Through a special introductory meeting, each subcontractor learned about the building and accepted a vested interest to meet the unusually ambitious goals. There was also a high level of monitoring during the construction: testing of assemblies such as the envelope to see if it met the design criteria; commissioning to work out the bugs; and ongoing monitoring and testing.

A great team and a beautiful building: functioning like a natural organism, the building collects and processes its energy while reacting to the surrounding stimuli. Seattle is lucky to have the Bullitt Center. The Bullitt Foundation will share their knowledge about the process with the public through the first floor Visitor’s Center as well as on their website, in hopes that future projects will consider the option of more closely reflecting nature in the design and construction of buildings.