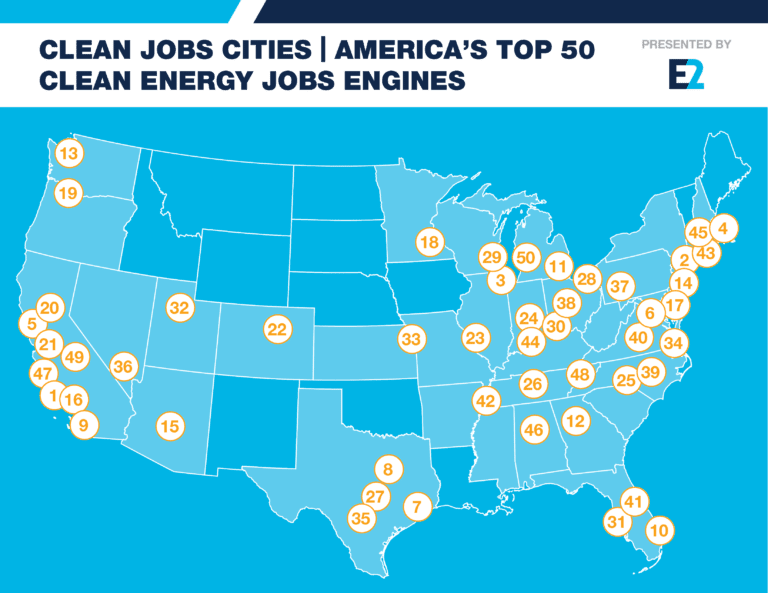 “Cities are seeing the benefits of shifting to clean energy, with jobs and economic growth,” said Bob Keefe, E2 executive director. “These are good jobs in energy efficiency, construction, manufacturing, renewable energy and clean fuels and vechicles. And they shouldn’t be ignored by lawmakers as they’re considering state and federal energy policies.”

In addition to releasing the Clean Jobs Cities report, E2 delivered to members of Congress its Clean Jobs Count pledge, signed by 25,000 E2 members, supporters and others who want more clean energy jobs and the policies that advance them.

“Wherever we’ve gone with our Clean Jobs Count campaign – whether it’s Virginia or Illinois or Nevada – Americans say the same thing over and over: They want more clean energy, and the jobs that come with it,” said Gail Parson, E2’s director of member and state engagement. “No matter where we go, we hear that Clean Jobs Count.”

“I’m from a coastal community that has been slow to recover from the recession. At the same time, it is threatened by recurrent flooding and sea level rise. With an incredible deep water port and well-trained, veteran-heavy workforce, we have a chance to create a hub for an Atlantic offshore wind industry that will diversify and improve the regional economy while slowing or reversing climate change. From a jobs standpoint, what could be more important?”

The report follows E2’s Clean Jobs America analysis which found the clean energy jobs account for nearly 3.2 million jobs across all 50 states and the District of Columbia. Both reports expand on the 2018 U.S. Energy and Employment Report (USEER) released in May by the National Association of State Energy Officials (NASEO) and Energy Futures Initative. E2 was a partner in the USEER report.

To speak with business leaders across America who support strong investments in clean energy and their impact on America’s economy, please contact Michael Timberlake at (202) 289-2407.