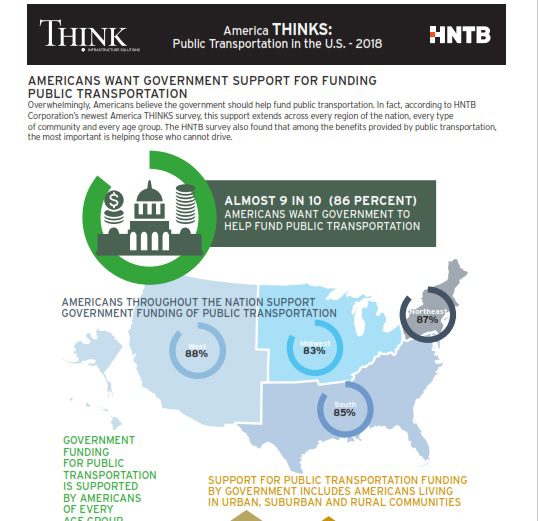 Public transportation funding support transcends every age group and geographic region in the nation, including urban, suburban and rural communities

Almost nine in 10 Americans, 86 percent, believe government should help fund public transportation, according to the findings of a new HNTB Corporation America THINKS national public opinion survey. While this belief is held most strongly among Americans living in urban areas (92 percent), 85 percent of suburban respondents, as well as 79 percent of those living in rural areas agree.

According to the survey, Public Transportation in the U.S.-2018, support for government funding of public transportation encompasses every age group with 93 percent of millennials, 85 percent of Generation X respondents, 80 percent of baby boomers and 61 percent of seniors in agreement. In addition, Americans across the nation support government funding for public transportation, including 87 percent in the Northeast, 85 percent in the South, 83 percent in the Mid-West and 88 percent in the West.
The HNTB survey defined public transportation to include ride-sharing services such as taxis, car/limousine services, car and van pools, online car services such as Uber or Lyft, bus/bus rapid transit, subways, street cars/light rail systems and commuter rail systems.
“Americans recognize the value and benefits of public transportation, and believe government funding is essential to build and maintain a public transportation system that delivers quality service,” said Kim Slaughter, HNTB national transit/rail sector leader and senior vice president. “It is remarkable the extent to which people across the nation, living in every type of community setting and across all age groups agree. Transit agencies and elected officials should take particular note of the support among younger segments of the population, and recognize they are increasingly in the majority as consumers of public transportation, as well as voters and taxpayers.”
HNTB’s America THINKS survey also found that more than eight in 10 Americans (83 percent) currently have access to some form of public transportation. For these Americans, the most prevalent option is bus and bus rapid transit available to 78 percent of respondents, closely followed by ride sharing at 74 percent. Commuter rail, street cars/light rail and subways were next at 24 percent, 22 percent and 14 percent, respectively.
Among those Americans with access to some form of public transportation, two in three (66 percent) have used it at some point, according to the HNTB survey. The survey found a majority of Americans (52 percent) believe the single most important benefit public transportation should offer is to help those who are not able to drive, with 62 percent of baby boomer respondents and 69 percent of seniors in agreement. Providing a safer way to travel was cited by 32 percent of respondents, while 31 percent cited more convenience access to everyday amenities.
“Americans place great importance on mobility for themselves and others,” said Slaughter. “Mobility equals freedom, and provides opportunity for greater choices where we live, more options for jobs, schools, healthcare, entertainment and amenities that are essential components to our quality of life.”
HNTB’s survey found almost half (49 percent) of respondents with access to public transportation are interested in services that use different transportation modes for door-to-door travel, with a single payment for their entire trip. This capability was of greatest interest to urban respondents (64 percent) as well as 64 percent of millennials.
The desire to live near public transportation continues strong according to the survey, with 65 percent of respondents reporting their interest has either increased or remained the same, compared to 66 percent of respondents in HNTB’s 2016 America THINKS survey, Transit Oriented Development in America.
About the survey
HNTB’s America THINKS Public Transportation in the U.S.-2018 survey polled a random nationwide sample of 1,019 Americans, ages 18 and older, between August 10 and August 13, 2018. It was conducted by Russell Research, which used an email invitation and online survey. Quotas were set to ensure reliable representation of the entire U.S. population ages 18 and over. The margin of error is +/- 3.1 percent.
About HNTB
HNTB Corporation is an employee-owned infrastructure firm serving public and private owners and contractors. With more than a century of service in the United States, HNTB understands the life cycle of infrastructure and addresses clients’ most complex technical, financial and operational challenges. Professionals nationwide deliver a full range of infrastructure-related services, including award-winning planning, design, program management and construction management. For more information, visit www.hntb.com.
NOTE: Age group delineations based on U.S. Census Bureau standards
Millennials: 18-36
Generation X: 37-53
Baby Boomers: 54-72
Seniors: 73+
Comments are disabled
NEXT ARTICLE
E2 Report Ranks America's Top 50 Cities for Clean Energy Jobs
September 26, 2018
PREVIOUS ARTICLE
IECA Region One Announces New Tagline
September 26, 2018