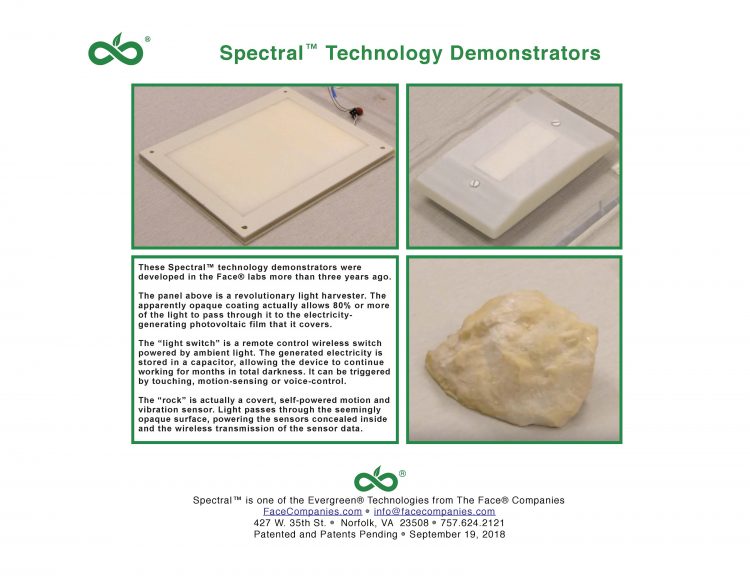 NORFOLK, VA – The Face® Companies of Norfolk, Virginia today announced the development of a revolutionary coating technology that will enable light-sensitive devices such as solar panels and photosensors to be disguised or seamlessly concealed, significantly increasing the aesthetic and economic appeal of these devices for a wide range of applications.

The patented coating, called Spectral™, is another innovation from The Face Companies’ Evergreen®Technologies. Durable and paper-thin, it appears opaque when applied to any surface but actually allows 80% or more of incoming light to pass through it. The Spectral™ coating can be applied like paint in virtually any color, pattern or texture, making light-harvesting devices such as thin film photovoltaic (PV) panels essentially invisible. A solar-powered roof shingle now can look just like a conventional shingle, or a solar panel on the roof of an electric car can be visually indistinguishable from the rest of the vehicle’s surface. The coating can also be applied to the back of a smartphone case to conceal a solar charging panel.

Light-sensing security devices are another major Spectral™ application. With the innovative coating, motion detectors or photodetectors can be made to blend in with their surroundings, looking like rocks, fence posts or other common objects.

“Spectral may be one of the most significant advances to date in making solar power and light harvesting both visually attractive and economically feasible in thousands of new applications,” said Brad Face, CEO of The Face® Companies. “With this coating, both natural and artificial light harvesting can be used in virtually every building to power a wide range of electronic devices and security sensors, including those enabled by the Internet of Things.”

The following video describes the Spectral™ coating and some of its many applications:
Evergreen® Spectral™ Video (Animation) – 6:05

More information on the Spectral coating is available on The Face Companies’ website.

About The Face® Companies:
The Face® Companies are a group of family-controlled companies headquartered in Norfolk, Virginia. Face has been granted more than 60 United States patents with dozens of patents pending in technologies ranging from energy harvesting systems, to wireless devices and construction equipment. Descended from a Norfolk contracting company founded by E.W. Face in 1867, Face developed the technologies and methods that led to the modern concrete commercial / industrial floor in the 1970s and 80s. The ASTM International standard for concrete profile quality control – “F-Numbers” or “Face Numbers” – is named for the company. Spectral™ is one of Face’s Evergreen® family of energy harvesting technologies.