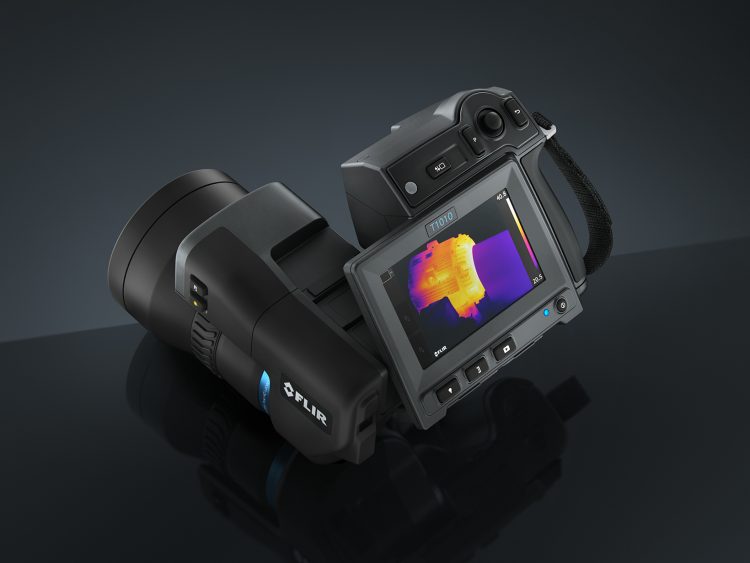 The T1010 is a lower-cost entry point to the expert lineup of T1K cameras. It offers the same 1024 x 768 (786,432 pixels) HD detector as the T1020, which can be boosted to 3.1 Megapixels thanks to FLIR’s unique UltraMax® image enhancement. Like all T1K cameras, the T1010 uses high-fidelity OSX™ Precision HDIR optics, which FLIR designed specifically to work with HD detectors for greater image clarity and measurement accuracy. The T1010 offers the same compact, reinforced design with a 120° rotating optical block, so users can scan targets at any angle while maintaining a comfortable position.

As FLIR releases the T1010, it is also upgrading the firmware for the entire T1K family. This latest version offers an updated graphical user interface (GUI) that’s as agile and responsive as a smartphone. New features include 1-Touch Level/Span, for improving image contrast, and customizable work folders to help streamline reporting. The latest firmware is integrated with all new T1010 and T1020 cameras, and also can be downloaded for free from FLIR customer support (http://flir.custhelp.com).

“The new GUI is a significant upgrade to what was already an industry-leading camera,” said Rickard Lindvall, General Manager of Instruments at FLIR. “By giving the T1K the feeling and responsiveness of a smart phone or tablet, we’re making it more accessible to new users. And it allows us to add on-screen tools that users really wanted, like 1-Touch Level/Span – which helps users fix the contrast on the target just by touching the screen.”

The T1010 is now available for purchase from select channel partners and directly from FLIR for $34,950. To learn more about all the T1K cameras, visit www.flir.com/t1k.

The statements in this release by Andy Teich and the other statements in this release about the product described above are forward-looking statements within the meaning of the Private Securities Litigation Reform Act of 1995. Such statements are based on current expectations, estimates, and projections about FLIR’s business based, in part, on assumptions made by management. These statements are not guarantees of future performance and involve risks and uncertainties that are difficult to predict. Therefore, actual outcomes and results may differ materially from what is expressed or forecasted in such forward-looking statements due to numerous factors, including the following: the ability to manufacture and deliver the systems referenced in this release, changes in pricing of FLIR’s products, changing demand for FLIR’s products, product mix, the impact of competitive products and pricing, constraints on supplies of critical components, excess or shortage of production capacity, the ability of FLIR to manufacture and ship products in a timely manner, FLIR’s continuing compliance with U.S. export control laws and regulations, and other risks discussed from time to time in FLIR’s Securities and Exchange Commission filings and reports. In addition, such statements could be affected by general industry and market conditions and growth rates, and general domestic and international economic conditions. Such forward-looking statements speak only as of the date on which they are made and FLIR does not undertake any obligation to update any forward-looking statement to reflect events or circumstances after the date of this release, or for changes made to this document by wire services or Internet service providers.