/ Events / First-ever Study on Brazil’s Transport Infrastructure to be Released in Washington, D.C

First-ever Study on Brazil’s Transport Infrastructure to be Released in Washington, D.C 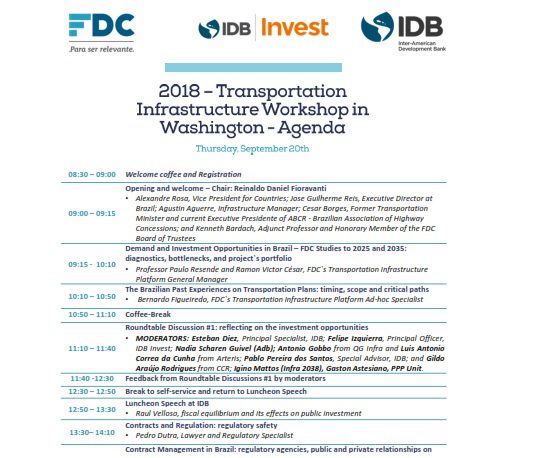 Washington, D.C, Sept. 18, 2018 – Fundacao Dom Cabral, the best business school in Latin America, will release a study titled “Diagnosis and Projections for Infrastructure in Transportation Logistics in Brazil” at the Inter-American Development Bank (IDB) headquarters in Washington, D.C, during the “Investments in Transport Infrastructure in Brazil” workshop Sept. 20.

The study—which provides a detailed look at a portfolio of proposed transport infrastructure projects that would help Brazil initiate a sustainable process of continuous improvement by 2035—is the first result of the Transport Logistics Infrastructure Platform (PILT/FDC), a transport logistics data repository sponsored by the CCR Group, VLI, Ecorodovias, QG Infra and Arteris.

According to Professor Paulo Resende, PILT/FDC’s and Fundacao Dom Cabral’s Logistics, Infrastructure and Supply Chain coordinator, the workshop will analyze Brazil’s current and long-term transport infrastructure. This includes concession models, attractiveness of private investment projects, national regulatory agencies and the need to improve institutional frameworks. “The study shows that 50 percent of Brazilian highways will be in terrible condition by 2025, but they will still be the main channel for cargo transportation. This could mean a R$15.5 billion (about US$3.75 billion) increase in logistics costs every two years—meaning costs could increase by about R$80 billion (about US$19.35 billion) by 2025.”

“We urgently need to ensure a more stable regulatory environment to increase private investors’ interest in the country and their willingness to participate in long-term projects, as well as lessen fears they may compromise their companies’ financial health. That’s why this debate is so important now,” noted CCR Group President Leonardo Vianna. He believes Brazil requires long-term planning, with structural projects taken on and protected by society, as well as inserted into the government’s infrastructure agenda.

The workshop will host 40 industry experts. In addition to releasing the study’s results, the event will include five roundtables with IDB executives and transportation industry representatives, such as Antonio Gobbo, Corporate Strategy director of Queiroz Galvao Infra; Luiz Antonio Correia da Cunha, Contract Management director of Arteris; and Gildo Araujo Rodrigues, director of CCR Aeroportos for the Americas.

Economist Raul Velloso will also be featured at the day-long event, where he will speak about fiscal balance and its effects on public investment, as will Professor Carlos Braga, who will discuss project funding and its barriers, limitations and challenges.

Other event presenters will include attorney Pedro Dutra, who will discuss contracts and regulations, and former Minister and current President of the Brazilian Association of Highway Concessionaires (ABCR) Cesar Borges, who will share his knowledge on regulatory agencies, contracts and the relationships between public and private companies.

About the CCR Group: Founded in 1999, the CCR Group is one of Latin America’s largest infrastructure concession companies. It started in road concessions and then diversified its business portfolio. In 2017 it changed its four operations into independent companies for related businesses, which are: CCR Lam Vias, CCR Infra SP, CCR Aeroportos, and CCR Mobilidade. The companies are responsible for managing the company’s current businesses, developing and analyzing new business opportunities in the primary and secondary markets, in Brazil and worldwide. Always at the forefront, the CCR Group is today one of the five largest infrastructure concessions’ conglomerates in Latin America; in addition, it was the first to start operating in the New Market of B3 (formerly BM&FBovespa). Today, it has 13,000 employees and the recognition of national and international markets due to its successful trajectory, always adopting the most rigorous practices of corporate governance, which guide its operations and are presented in the company’s Integrity and Compliance Program.

About Fundacao Dom Cabral (FDC): Fundacao Dom Cabral was selected in 2018 as the 12th top business school in the world by the Financial Times. Its mission is to contribute to the sustainable development of society by educating, developing and building the skills of executives, entrepreneurs and public officials. A year ago, it launched the CEOs’ Legacy initiative. This FDC-conducted initiative gathers CEOs who are oriented to the construction of relevant and sustainable legacies that can inspire people, organizations and society. More than just increasing the awareness of this cause among business leaders, the CEOs’ Legacy mobilizes professionals to expand their power of influence and act as agents of progress in the construction of a better world