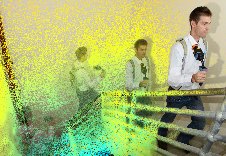 ZEB1, 3D Laser Mapping’s new hand held mobile mapping system, has been successfully used by service provider Terrametrix on a project in the Midwest United States. ZEB1 is specifically designed for use in areas of limited satellite reception for example indoors, underground and high density landscapes such as urban environments and forests. Terrametrix stretched the limits of the ZEB1’s capabilities in an outdoor overhead utilities application and has become one of the first commercial organisations to adopt this new technology.

Terrametrix, an Omaha, Nebraska based professional survey company selected ZEB1 following extensive field trials. It is intended to complement other types of survey technology, such as the vehicle based mobile mapping system StreetMapper, already in their survey toolbox.

“ZEB1 allows us to go back to the good old days of being a surveyor – in the field literally rattling the fence to get access to certain areas,” commented Michael R. Frecks, PLS and President / CEO of Terrametrix. “However, with ZEB1 there is no time consuming set up, we can rapidly scan large areas and the data is accurate and ready to use on return to the office. This is a huge advantage for us and for our clients.”

Frecks continued, “Prior to purchasing ZEB1, we rigorously tested the systems capabilities specifically looking at data accuracy, coverage and ease of use. It exceeded our expectations in all aspects!”

The ZEB1 system includes a lightweight laser scanner mounted on a simple spring mechanism. A small backpack accompanies the hand held device which continuously scans as the operator walks through the environment. ZEB1 is therefore easy to use, truly portable and does not require expensive software or high end computers to process the captured data.  As the operator moves through an environment the scanner loosely oscillates about the spring producing a rotation that converts 2D laser measurements into 3D fields of view. Its ability to self-localise makes ZEB1 ideally suited for use indoors, underground and in other covered environments; such as dense forest and urban canyons, where traditional solutions that utilise GPS don’t function well.

ZEB1 was developed by CSIRO, Australia’s national science agency, and is licenced from GeoSLAM (a UK based start-up company). The competitively priced ZEB1, now exclusively available from 3D Laser Mapping, allows for fast data capture without any complex set up.

with their own software and peripherals to create solutions at the cutting edge of technology. Through a worldwide network of distributors 3D Laser Mapping is able to provide frontline support and service for a growing international client base. For further information see www.3dlasermapping.com

CSIRO, the Commonwealth Scientific and Industrial Research Organisation, is Australia’s national science agency and one of the largest and most diverse research agencies in the world. CSIRO works with leading scientific organisations around the world, and is recognised internationally for the quality of its research. CSIRO’s research is performed by the 13 Divisions, which are the business units of CSIRO. CSIRO is one of the largest and most diverse scientific institutions in the world with more than 6500 staff located across 56 sites throughout Australia and overseas. For further information see www.csiro.au

CSIRO Digital Productivity and Services Flagship a $40 million research initiative targeting productivity growth in Australia through frontier services innovation and by unlocking the value of a national broadband infrastructure. Through its research the flagship will help add value to the Australian economy by developing and delivering more efficient and innovative services that improve people’s wellbeing and prosperity.

Terrametrix, LLC is driven by the extensive experience Michael R. Frecks, PLS, has in high tech 3D laser scanning as both an innovator in the industry as well as a consultant and advisor for its software development since 2000.  Data collection experience and expertise is extensive in both the transportation and architectural disciplines.  As a professional Land Surveyor since 1992, Michael’s approach to data documentation combining GPS, 3D laser scanners and INS, makes his approach more accurate, safer, faster, and cost efficient. His vast knowledge of scanner specifications; identifying software and hardware capabilities, how they interact with each other; beta testing of equipment and software; and his demand of high accuracy standards has advanced the evolution of acquiring as-built data documentation through 3D laser scanners. For further information see www.terrametrix3d.com