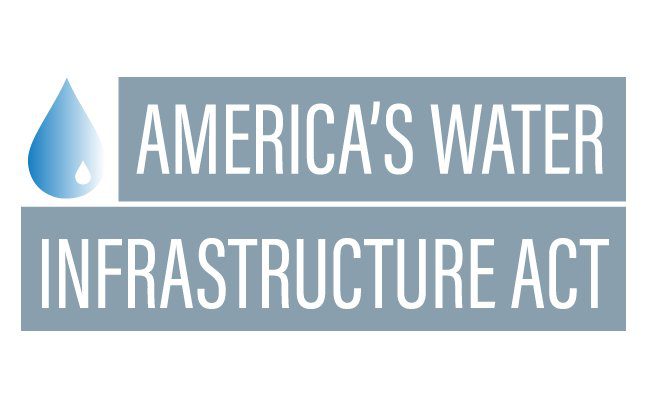 Washington, D.C. – House and Senate Committee leaders today announced a bipartisan, bicameral agreement on comprehensive water resources infrastructure legislation, which could be considered on the House floor later this week.

The announced text of the America’s Water Infrastructure Act of 2018 includes four titles.

Title I authorizes proposed U.S. Army Corps of Engineers civil works activities for port, waterway, flood protection, and other water infrastructure improvements for the country.  This title incorporates much of H.R. 8, the Water Resources Development Act (WRDA) of 2018, which overwhelmingly passed the House in June, as well as key provisions from the America’s Water Infrastructure Act that was unanimously approved by the Senate Environment and Public Works Committee in May.

Title II seeks to bring greater investment in and modernization of the country’s aging drinking water infrastructure. It also helps facilitate compliance options by our drinking water delivery systems. This title incorporates substantial portions of H.R. 3387, the Drinking Water System Improvement Act, which passed the Energy and Commerce Committee unanimously in July 2017. Key provisions include the authorization of almost $4.4 billion over three years for the state drinking water revolving loan fund program, aid to states and utilities with compliance and asset management, updates to antiterrorism and resilience measures at public water systems, and improves transparency for consumers about the quality of their drinking water.

Title III encourages the use of clean, baseload hydropower by streamlining the burdensome regulatory approval process. This title incorporates several bills that passed the House including, H.R. 2880, the Promoting Closed-Loop Pumped Storage Hydropower Act; H.R. 2872, the Promoting Hydropower Development at Existing Nonpowered Dams Act; H.R. 2786,To Amend the Federal Power Act with Respect to the Criteria and Process to Qualify as a Qualifying Conduit Hydropower Facility; as well as key provisions from H.R. 3043, theHydropower Policy Modernization Act. Additionally, this title strengthens consumers’ rights to challenge any energy rate change when the FERC fails to accept or deny a rate change.

House Transportation and Infrastructure Chairman Bill Shuster (R-PA): “Water Resources Development Acts – WRDAs – are critical to building the infrastructure that moves goods, grains, resources, and energy products throughout the entire Nation, from our coasts to the interior, and everywhere in between.  WRDA, as included in the America’s Water Infrastructure Act of 2018, will ensure that we stay economically competitive with other countries.  When I became Transportation and Infrastructure Committee Chairman, I prioritized returning Congress to the regular consideration of these infrastructure bills.  I am proud that we have been able to work together for the good of our infrastructure and now have an opportunity to send the third WRDA during my chairmanship to the president.”

House Transportation and Infrastructure Ranking Member Peter DeFazio (D-OR): “This bipartisan legislation will authorize water infrastructure projects developed by the U.S. Army Corps of Engineers, which will strengthen our coastal communities, help keep us competitive in the world economy, and restore our coastal environment.  These critical water infrastructure projects will improve our Nation’s ports, harbors, and waterways, and create and sustain thousands of good-paying American jobs.  I applaud my colleagues for their bipartisan work, and I look forward to getting this bill passed and signed into law.”

Senate Environment and Public Works Chairman John Barrasso (R-WY): “America needs comprehensive water infrastructure legislation that will cut Washington red tape, create jobs, and keep communities safe.  We have reached a bipartisan agreement with the House of Representatives to accomplish these important goals.  This bill will help rural communities and cities.  It will grow the nation’s economy and speed up important projects.  Congress should pass this bipartisan consensus bill and send it to President Trump for his signature.”

Senate Environment and Public Works Ranking Member Tom Carper (D-DE): “This water infrastructure bill shows how we can improve our communities, bolster our economy and help keep American families safe.  I’m glad members of both the Senate and House were able to find areas of agreement and reach a compromise on a major water infrastructure bill that will create good-paying jobs here at home, incentivize businesses to buy and use American products, invests in critical infrastructure like our country’s ports and waterways, and expands our investments in drinking water for the first time in more than two decades.  Further, the bill will help coastal communities prepare for the growing risks of climate change and help communities across America invest in local water infrastructure needs.  This legislation also creates greater transparency and improves collaboration between local and federal governments to ensure taxpayer dollars are being used efficiently.  Today’s progress brings us one step closer to seeing this important infrastructure bill cross the finish line.”

House Energy and Commerce Chairman Greg Walden (R-OR): “This bill is an important step toward modernizing America’s critical water infrastructure.  Making important improvements to our water resources infrastructure in turn boosts the economy, strengthens national security, and protects the environment.  It also provides much-needed investments and updates to our nation’s aging drinking water infrastructure to not only ensure these systems can operate well into the future but also address the most pressing drinking water issues in the States.”

House Energy and Commerce Ranking Member Frank Pallone, Jr. (D-NJ): “This bipartisan, bicameral agreement reauthorizes the Safe Drinking Water Act for the first time in 20 years, and provides significant funding to state and local governments that are in dire need of upgrading their drinking water infrastructure.  The final agreement nearly doubles funding for the State Revolving Fund, provides grants for schools to replace lead in drinking water fountains and increases emergency assistance for areas affected by natural disasters.  Safe and clean drinking water is a basic necessity for everyone, and this agreement will help communities around the nation modernize their water infrastructure.”