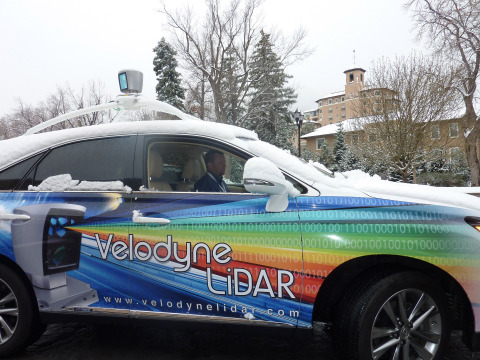 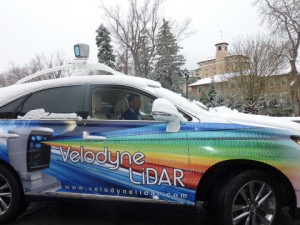 Velodyne features the HDL64 mounted on a demonstration Lexus at SPAR International.

Velodyne LiDAR, the leading developer of real-time 3D LiDAR sensor technology, showcased its newest HDL32 sensor at SPAR International. The Velodyne Lexus Demonstration Vehicle, mounted with a LiDAR HDL64, made the approximate 1,366-mile trip to SPAR in Colorado Springs, Colorado from its home base in San Jose, California.

Velodyne sells its LiDAR technology for 3D mapping, autonomous driving, and driving safety systems to notable companies such as Google and Caterpillar.

“Along the way there was much excitement and enthusiasm as the general public was able to see the practical application of Velodyne’s LiDAR on the road,” stated Velodyne Engineer Rick Yoder. “The trip allowed Velodyne to demonstrate how the LiDAR sensor utilizes laser-based measurements to view the environment in 3D.”

The LiDAR is the most advanced, state-of-the-art technology. Offering more data in a quicker time frame than any 3D viewing system, the enormous amount of data generated by the LiDAR per second allows it to map the environment as it drives down the street or even forecast safety decisions. LiDAR picks up elements in the environment that may be as small as a cat wandering in front of a car.

At the show, Velodyne showcases its most recent HDL32 high-definition LiDAR sensor. The latest version of firmware operating the HDL32 provides not only high-definition point clouds with >700,000 points per second at up to 20Hz, but now also features calibrated reflectivity that allow for recognizing street signs, lane markers and other objects while driving at highway speeds. The new HDL32 firmware additionally provides an easy-to-use Webserver based GUI, allowing for the first time to set and monitor critical parameters during live operation.

Mandli Communications shows off their black Hummer (H2) with two HDL32 on the show floor, which were chosen for their current generation mapping system. Mandli previously used Velodyne’s HDL64 sensors when they mapped every state street of Utah for the department of Transportation (DOT) in order to capture road conditions, street signs, bridge heights, etc.

Other exhibitors include LaserUSA headed by Jeff and Daniel Fagerman introducing their newest SCANLOCK system that packages GPS, IMU, data storage and Velodyne’s latest revision HDL32 all in a very compact package. Topcon shows their mobile mapping system IP-S2-HD with a surround camera system and the Velodyne HDL64 for High-Definition 3D LiDAR capturing. Presentations by Stan Burns from the Utah DOT showcases the power of visionary thinking of fully digital asset management and by Ron Singh from the Oregon DOT presenting the electronic highway project, both using Velodyne Scanners for capturing the roads and assets in their respective states.

In order to celebrate the introduction of these innovative HDL32 features in style, Velodyne is giving away several of its high-end vPulse in-ear headphones during daily raffles at the Velodyne booth. The public is invited to stop by and join the fun while learning about Velodyne’s latest LiDAR and Acoustics products. For more information about Velodyne Acoustics and headphones visit www.velodyne.com.

About Velodyne LiDAR: Velodyne, located in California’s Silicon Valley, established its roots over 30 years ago. The company’s LiDAR division evolved after founder and inventor, David Hall, competed in the 2004-05 DARPA Grand Challenge utilizing stereo-vision technology. Based on his experience during this challenge, David Hall recognized the limitations of stereo-vision and developed the HDL64 high-resolution LiDAR sensor. Since its first commercial sale in 2007, Velodyne’s LiDAR division has emerged as the leading developer of laser imaging technology. Today, Velodyne continues to build on its iconic history by introducing groundbreaking technology and design. As an all-encompassing technology company, Velodyne also consists of an Audio division and Marine division. For more information about Velodyne LiDAR, please visit www.velodyneLiDAR.com.

About SPAR International: SPAR International Conference on End-to-End 3D brings together professionals from around the world to discover the latest advances and technologies in 3D data capture, processing and delivery. SPAR International targets asset owners, engineers, technology developers and other professionals to present and discuss the latest tools and techniques for using 3D technologies to drive efficiency, improve workflows, reduce project timelines, improve safety and mitigate risk. The conference takes place April 15-18 2013 at The Broadmoor in Colorado Springs, Colorado. For more information and to register, visit www.SPARPointGroup.com/international.