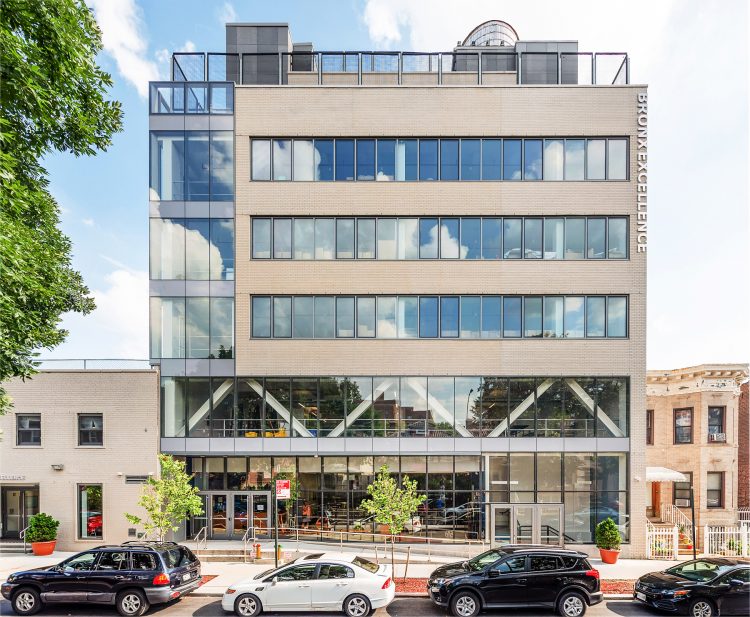 Bronx, NY – CTA Architects, P.C. (CTA) has completed the final phase of new construction, renovations, and expansions at the Bronx Charter School for Excellence for Excellence Community Schools (ECS), a charter management organization. The school, also known as Bronx 1, is located at 1952-1960 Benedict Avenue, in the Parkchester neighborhood of this borough. CTA served as ECS’ architect for this $20 million, phased school project, which now serves over 800 students in kindergarten through eighth grade. 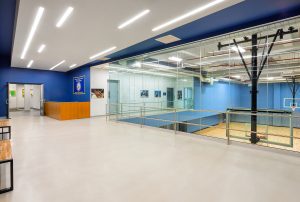 The main hallway at the first floor level is cantilevered over the perimeter of the gymnasium. Photo by Edward Menashy

“The newly expanded and renovated school perfectly serves our award-winning program and accommodates the needs of both students and faculty. Following the expansion, we were able to increase our enrollment to more than 800 young scholars,” said Dr. Charlene Reid, CEO, Excellence Community Schools.

Craig Tooman, AIA, LEED-AP, the CTA principal in charge of the project, explained that the placement of the gymnasium was something of a challenge. “Due to the building’s setbacks, we could only put the gymnasium on the bottom two floors. The gym floors had to be wide-open, column-free spaces, so we installed large structural trusses on the floors above,” Tooman stated. For example, there are four trusses running through the second and third floors, immediately above the gymnasium floor and part of the main lobby and main hallway at the first floor is cantilevered over the perimeter of the gymnasium. Visitors can see some boxed-in trusses in the classrooms on the floors above, all of which makes for a very interesting – and complex – structural design. 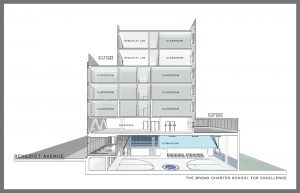 Bronx 1, established in 2004, received the U.S. Department of Education’s highest honor for schools across the country – the National Blue Ribbon School Award – in 2012. Excellence schools prepare young scholars to compete for admission to and succeed in top public, private, and parochial schools by cultivating their intellectual, artistic, social, emotional, and ethical development. Bronx 1 is currently one of the most competitive charter schools in New York City. It accepts only 8% of applicants; it has a waiting list of over 4,000. There is also a Bronx Excellence 2 (currently K-2, although it will become K-8 as scholars are graduated), and Bronx Excellence 3 (currently K-1, but similarly becoming K-8). Bronx Excellence 4 will open its doors for the first time this September. The Excellence Network currently serves over 1,400 scholars. 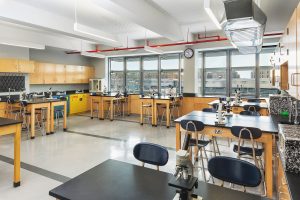 In addition to CTA, the project team included Collado Engineering as the mechanical, electrical, and plumbing (MEP) engineer; Robert Silman Associates Structural Engineers, DPC, as the structural engineer; Hubert H. Hayes, Inc. as the elevator consultant; and Municipal Building Consultants, Inc. as the expediter. JLL served as the owner’s representative and LEED consultant. 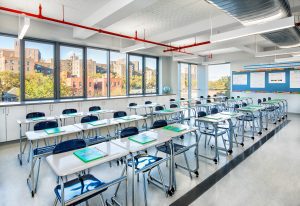 The new classrooms feature expansive windows and, in some cases, access to outdoors terraces.
Photo by Edward Menashy

To one side of the existing school building is the new, seven-story tower. It is a steel structure with a pile foundation. Saša McCabe, AIA, the lead architect on the project, noted that the exterior features a masonry façade with a rain screen around the stairwells. “We placed curtain wall on the north façade and wrapped it around to the east façade. We also specified curtain wall on the south façade, ‘blanketing’ portions of the structure. Passersby can see one truss in the cafeteria in the front of the building from the street, right behind the glass. There is cross-bracing that was boxed in so it can be seen in front of the windows in the classrooms. It provides an interesting visual effect,” said McCabe.

When visitors walk into the building’s lobby, they can see the top of the 23-foot-high gymnasium, as a glass wall surrounds it. The gym floor is made of Forest Stewardship Council-certified wood, while the ceiling is white-painted metal – the underside of the metal deck above. Padding was added along the walls. The space includes volleyball courts with three nets, retractable basketball hoops, and bleachers.

The lobby has a poured-concrete floor and painted walls. One story above that are the cafeteria, teaching kitchen, and an outdoor terrace off of the cafeteria space. The third floor features a high school-grade science laboratory, ensuring the young scholars have access to top-of-the-line science facilities. The uppermost floor features a computer laboratory, while the middle floors feature primarily classrooms with some study rooms and a teacher lounge. In all, CTA created 18 classrooms in this building.

Finishes include glass walls in the corridors, offices, and study rooms, making the hallways feel more open. Walls are primarily painted and acoustical ceiling were used in the classrooms. These ceilings, however, are foam panel ceilings rather than dropped ceilings, in order to meet accoustical properties required by LEED guildelines, while maximizing ceiling heights and exposing the structure.

While the tower was placed on one side of the existing Bronx 1 building, the addition was placed on the other side. The existing building (two stories and a cellar), coupled with the annex (two stories and no cellar), is now used primarily for the younger students, while the middle school-age scholars use the tower. The annex is very similar in appearance and feel to the tower, with both using similar structural elements and finishes. Meanwhile, the existing building has a bonded wall that was painted to be a similar color to the new buildings.

The renovation work encompassed mostly the upgrade of interior finishes. Asaf Yogev, AIA, the associate architect on the project, said, “We incorporated several layout changes in the lobby entrance and staff area, in order to best connect the annex with the existing building. Otherwise, we had the construction team upgrade the floors, paint, and generally freshen up everything.”

Yogev also noted that the existing structure’s cellar has a servery, but no separate kitchen. The design team created a flow whereby staff members bring food prepared in the tower’s kitchen down the elevator and into the extant building’s cellar cafeteria. Thus, the kitchen in the new tower serves all of Bronx 1’s scholars.

The project team had to devise some creative phasing and logistics to perform construction work around the functioning school. ECS owned property one block down from the site, so, at times, scholars and staff were relocated there.