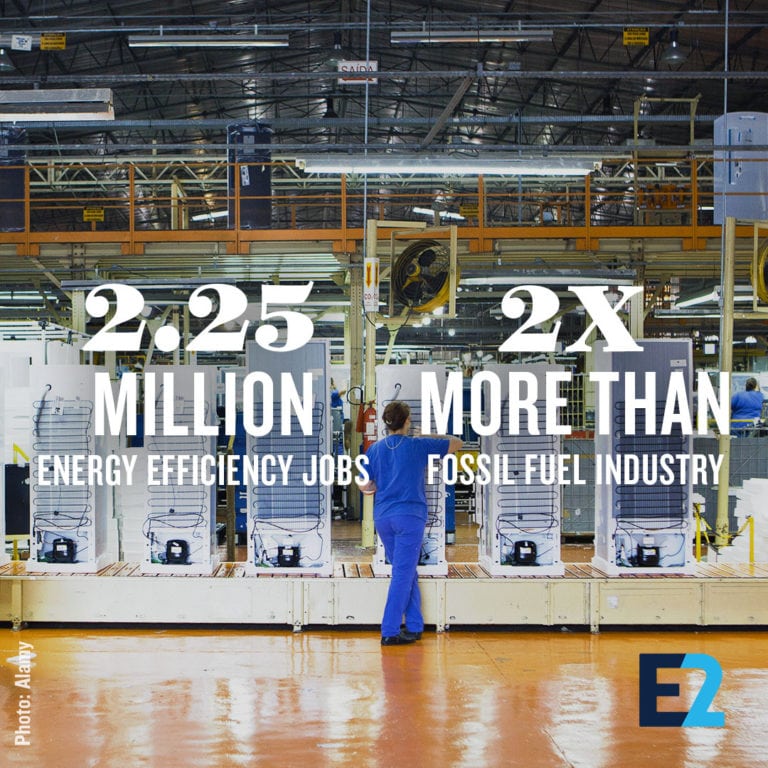 WASHINGTON AND BOSTON – (September 6, 2018) – Energy efficiency added more new jobs than any other industry in the entire U.S. energy sector in 2017, and now employs nearly 2.25 million Americans, according to a new jobs analysis from E4TheFuture and the national, nonpartisan business group E2 (Environmental Entrepreneurs). The new report, Energy Efficiency Jobs in America 2018, finds energy efficiency workers now outnumber elementary and middle school teachers, and are nearly double the number of Americans who work in law enforcement.

“This good news buoys us beyond politics to unite a focus on the positive,” said Steve Cowell, president of E4TheFuture. “We have long known that energy efficiency is a major source of jobs, and by conservative estimates, about one in every hundred U.S. adults now works in energy efficiency. Efficiency is also a key strategy for meeting multiple policy objectives. It saves money, improves health, lowers carbon emissions and creates local jobs that cannot be outsourced.”

“We all know energy efficiency creates savings for consumers and businesses with every month’s electric bill,” said Bob Keefe, executive director of E2. “We also now know that energy efficiency creates jobs – millions of them – all across America. These are good-paying jobs at your neighborhood construction company, upgrading windows and installing insulation; at your hometown HVAC contractor, installing heat pumps and high-efficiency air conditioners; at your local factory, manufacturing Energy Star appliances and LED lighting systems; and at thousands of related companies nationwide.”

With workers in 99.7% of U.S. counties, energy efficiency has become a nationwide job engine integral to state and local economic growth. More than 300,000 energy efficiency jobs are located in America’s rural areas, and 900,000 jobs are found in the nation’s top 25 metro areas. One out of every six U.S. construction workers are involved in energy efficiency, as are more than 315,000 manufacturing jobs, according to the report.

More detailed breakdowns of energy efficiency jobs for all 50 states and the District of Columbia – including job totals for every state’s congressional and legislative district, and maps of each state’s top counties — can be found at e2.org/eejobsamerica.  See a set of FAQs about the report.

The report follows E2’s Clean Jobs America analysis, which found that clean energy employment accounts for nearly 3.2 million jobs across all 50 states and the District of Columbia. Both reports expand on the 2018 U.S. Energy and Employment Report (USEER), released in May by former Energy Secretary Ernest Moniz’s Energy Futures Initiative (EFI) and the National Association of State Energy Officials (NASEO). E4TheFuture and E2 were partners on the USEER.

To speak with business leaders around the country who support strong investments in energy efficiency and their impact on America’s economy, please contact Michael Timberlake (mtimberlake@e2.org).