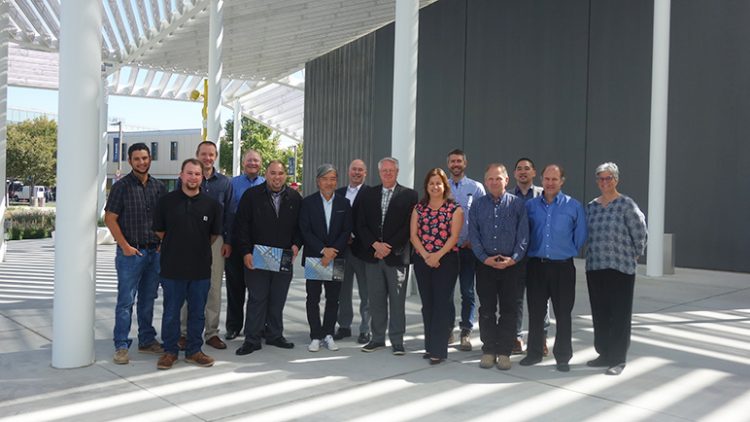 The UC Davis Jan Shrem and Maria Manetti Shrem Museum of Art in Davis, Calif., has earned national recognition in the 2018 Innovative Design in Engineering and Architecture with Structural Steel awards program (IDEAS2). In honor of this achievement, members of the project team were presented with awards from AISC during a ceremony that took place at the building on Wednesday.

The museum sits at the edge of a frontier of sorts–on the edge of campus and town, across a major Interstate from farmland. The project is visually defined and covered by a 50,000-sq.-ft undulating canopy over the building and the majority of the remaining site. The varying angles and porosity of the canopy infill members filter and reflect sunlight, creating an experience that changes throughout the day and from season to season. 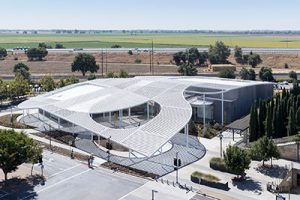 The canopy is supported by round hollow structural sections (HSS) of varying diameters ranging dramatically in height from 15 ft to 35 ft, all supporting HSS14 ×10 girders and beams. They in turn support triangular, perforated aluminum infill beams of varying spacing, orientations and perforations. The canopy columns are each founded on a concrete drilled pier, creating a “flag pole” system of cantilevered columns. The canopy is tied to the building pavilions, so lateral forces are shared by the cantilever columns and the lateral system–made of buckling restrained braced frames (BRBFs)–and the canopy girders function as seismic collectors.

“Rather than being an afterthought or add-on, the undulating steel canopy ties the buildings together, making them a cohesive whole,” commented Lynda Leigh, senior project manager at Turner Construction, and the general contractor juror in the competition.

For more on all of this year’s IDEAS2 award winners, see “2018 IDEAS2 Awards” in our May issue.

AISC is accepting entries for the 2019 IDEAS2 competition at www.aisc.org/ideas2. The entry deadline is SteelDay, September 28, 2018.