/ Energy / How much water is used to fulfill the energy needs of the US?

How much water is used to fulfill the energy needs of the US? 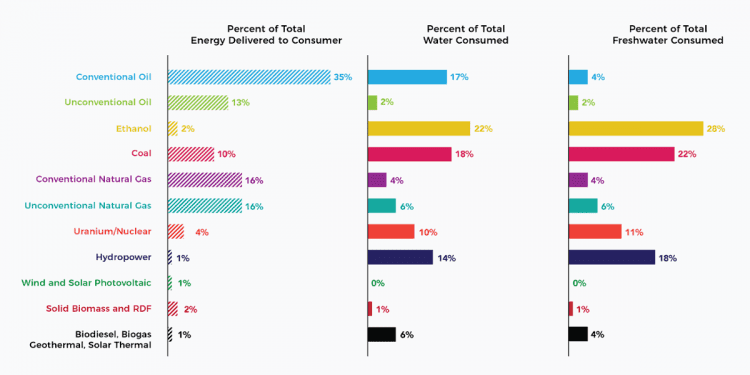 Study analyzes how much water is used by oil, coal, natural gas, wind and other energy sources

To generate the energy delivered to each home, business and industrial entity in the United States each year, trillions of gallons of water are required for energy production, processing, conversion and transport. However, the exact amount of water withdrawn from the environment and consumed for each energy source has never been quantified – until now.

For each of the various energy sources, from coal to wind, University of Southern California Assistant Professor Kelly Sanders and the study’s lead-author Emily Grubert, soon to be assistant professor at Georgia Institute of Technology as of January 2019, quantified how much water is withdrawn, or removed, from water resources for the U.S. energy economy, how it is used, and whether it is ultimately returned to its original water source or otherwise “consumed” through losses such as evaporation.

Sanders and Grubert spent two years collecting and analyzing data from government reports and individual operators throughout the country for each of the energy sources used in the U.S. Their work covers 99.4 percent of U.S. primary energy consumption in 2014 and is the first known comprehensive estimate of total water withdrawal and consumption by U.S. energy systems, detailed by energy source, water source and water source quality.

Some major detailed findings include:

The amount of water used by each energy source is not regularly measured, which can make resource management challenging. Much of the work on energy related water consumption relies on estimates that were published in the early 1990s as intensity factors (that is, the number of gallons needed to produce one unit of energy) rather than absolute totals of the water required for the national energy system. However, as energy systems continue to progress, these factors become outdated due to factors such as emerging technologies, efficiency improvements and changes in production techniques. Other more recent studies evaluating water use have typically limited their scope to individual energy sources or geographic areas.

“This study is important because our energy system requires a lot of water to ensure that it is safe and reliable,” said Sanders, assistant professor of civil and environmental engineering and Dr. Teh Fu Yen Early Career Chair. “Without accurate data regarding the water requirements of our energy supply, derived with common analytical methods and definitions, it is difficult to anticipate how future investments in the nation’s energy economy might be impacted by changes in water availability.”

Currently, Sanders and her research group are working with Grubert to resolve these national water data into more detailed estimates by U.S. county, as water availability and needs vary significantly from the dry southwest to the water abundant northeast.

Their findings, published in Environmental Science and Technology, could help policy makers manage resources and determine optimal energy investments, by providing the energy sources to meet societal needs with the least amount of harmful impact on the environment.