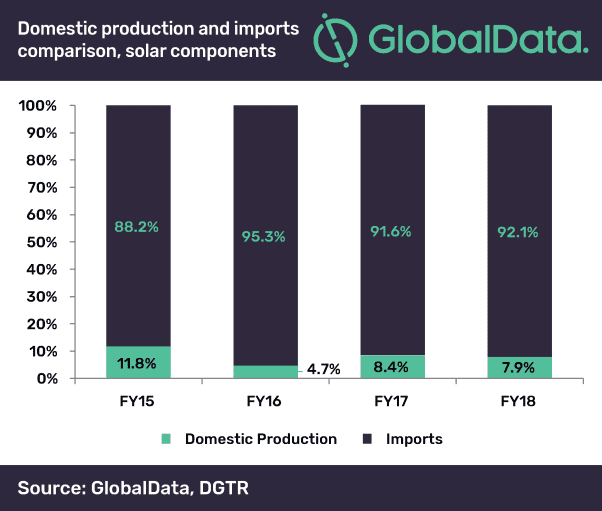 India’s Ministry of Commerce, through the Directorate General of Trade Remedies (DGTR), has imposed a safeguard duty (SGD) on solar cells and modules imported from China and Malaysia for the next two years. However, the imposition of SGD will impact the solar tariffs and in turn will have far reaching consequences on India’s commitment to the Paris Agreement or the National Solar Mission, says leading data and analytics company GlobalData.

In 2015, India committed to the Paris Agreement whereby reduction of CO2 emissions by 33–35% from 2005 levels was targeted. In line with the commitment, the country established a target of achieving 100 gigawatts (GW) of solar power generation by the year 2022.  As a result, the demand for solar cells and modules increased from 1,476 megawatts (MW) in FY2015 to 10,573 MW in FY2018 while the production of the domestic industry increased from 170 MW to 842 MW.

On the other hand, China has massively increased its production capacity of solar cells and modules to cater to the growing demand for renewable energy components globally. The country has significantly increased exports of these items.

In response to this, the Indian Solar Manufacturers Association (ISMA), on behalf of five domestic manufacturers—Mundra Solar PV, Indosolar, Jupiter Solar Power, Websol Energy Systems and Helios Photo Voltaic—filed an application in 2017 and complained that their margins remained stagnant because the developers are importing equipment from cheaper manufacturing locations like China and Malaysia.

Mohit Prasad, Power Analyst at GlobalData, says: “With the major solar PV installations driven by imports from China, imposition of SGD would be detrimental to indigenous manufacturers due to escalation in the deployment cost of solar projects. The upcoming bids for solar PV plants are expected to witness higher bid tariffs, which ultimately will impact India’s commitments under the Paris Agreement.”