/ News / Going from Strength to Strength in Rail

Going from Strength to Strength in Rail

For over a quarter of a century, Cintec has secured and reinforced historic and historical buildings, masonry bridges, monuments, railway structures, retaining walls and harbour walls throughout the world.

The patented Cintec reinforcement and anchoring system is straightforward: injecting a proprietary cementitious fluid grout into an anchor surrounded by a fabric sock, which has already been placed in an oversized drilled hole. The reinforcement system’s ingenuity lies in its versatility. Drawing on decades of experience and testing, Cintec’s designers can customize it to any specification.

Cintec International has supplied Network Rail and formerly British Rail and many County Councils and Local Authorities with anchors and reinforcements for over 25 years either directly or through Cintec’s approved contractor network.

Cintec and its partner companies offer a complete diagnostic service on all masonry and stone bridges and structures, from initial assessment and a finite element design process through to anchor installation and completion. 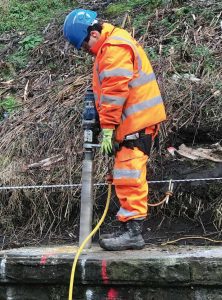 The work, which is essential to the electrification process, involves utilising Cintec’s patented anchoring system to support the weight of the gantries which will hold the cables needed to electrify the lines, and in some cases to strengthen railway bridges and viaducts to which the gantries are attached.

This work has continued over the last 3 years on the Northern Hub, Great Western Line and numerous projects throughout London including the complete Gospel Oak to Barking line.

One of the latest uses for Cintec anchors has been at Maidenhead viaduct. The engineers Balfour Beatty Rail needed to connect a series of concrete slabs for overhead gantries to the existing stone viaduct without any possibility of subsequent movement.

The ballast at the side of the viaduct was cleared away and the concrete slabs were positioned. Cintec’s installer Peter Cox drilled 65mm diameter vertical holes through the concrete slab and into the original sub structure, then installing Cintec 24mm stud anchors with an embedment of 1,700mm to tie the new concrete block to the original viaduct. Additional Cintec anchors were then used to fix the gantries into position. 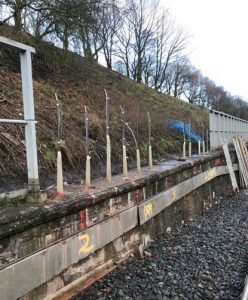 A similar project is at present being carried out on the Chorley line where they are installing gravity foundations. Cintec anchors are being used to connect the new concrete foundation to an existing masonry wall. Vertical Cintec M24 anchors 2,325mm long are installed into the masonry and the new concrete foundation subsequently cast around the exposed ends of the anchors. After casting the concrete 200x100x20mm washer plates are used to secure the concrete to the masonry wall by Cintec installer Lundy Projects.

Once the anchors have been installed any holes or voids have been filled using Cintec Presstec grout. This system is also planned to be used at Bolton station.

On the London to Cardiff line near Chipping Sodbury the line exits the long tunnel and continues through a deep cutting with sides at angles between 65 and 75 degrees. The diagram below illustrates the problem as the line had little clearance between track and cutting face.

The inclined face of the cutting consisted of a masonry facing in front of a rockface of variable consistency and internal voids and fractures. Also, as there is insufficient room to accommodate traditional concrete pad foundations to plant electrification gantries upon the obvious and only answer was to use the Cintec anchor system.

The 96 No Grade 316 SS 45mm diameter Cintec anchors in 100mm diameter hole up to 3,300mm long were installed to secure the gantries along a substantial length of cutting under the design of Atkins consulting engineers and Network Rail’s team at Swindon.

Cintec International’s work at these major London Stations is ongoing and has been vital to the remodeling and upgrading projects taking place.

Working with an alliance of AECOM, Colas Rail, Mott MacDonald, Network Rail and Skanska on Waterloo the Cintec anchor system was used as high load holding down anchors for the new canopy link between the new and old stations.

In this case, it is Cintec’s ability to provide a bespoke system for the problem that has enabled these projects to be so successful. The great flexibility of designs available to the engineers has enabled a large variety of structural challenges to be met utilising Cintec’s anchors.

Cintec is proud to have been involved in the work that has already taken place improving the UK’s rail system and plans to continue to expand into the rail upgrading programme with partnering arrangements with prime suppliers to Network Rail in addition to advising professional design practices on practical and cost effective structural solutions.

Ongoing product and engineering development work will enable Cintec to provide even more inventive solutions to structural problems within the rail assets to continue to improve UK’s rail infrastructure.