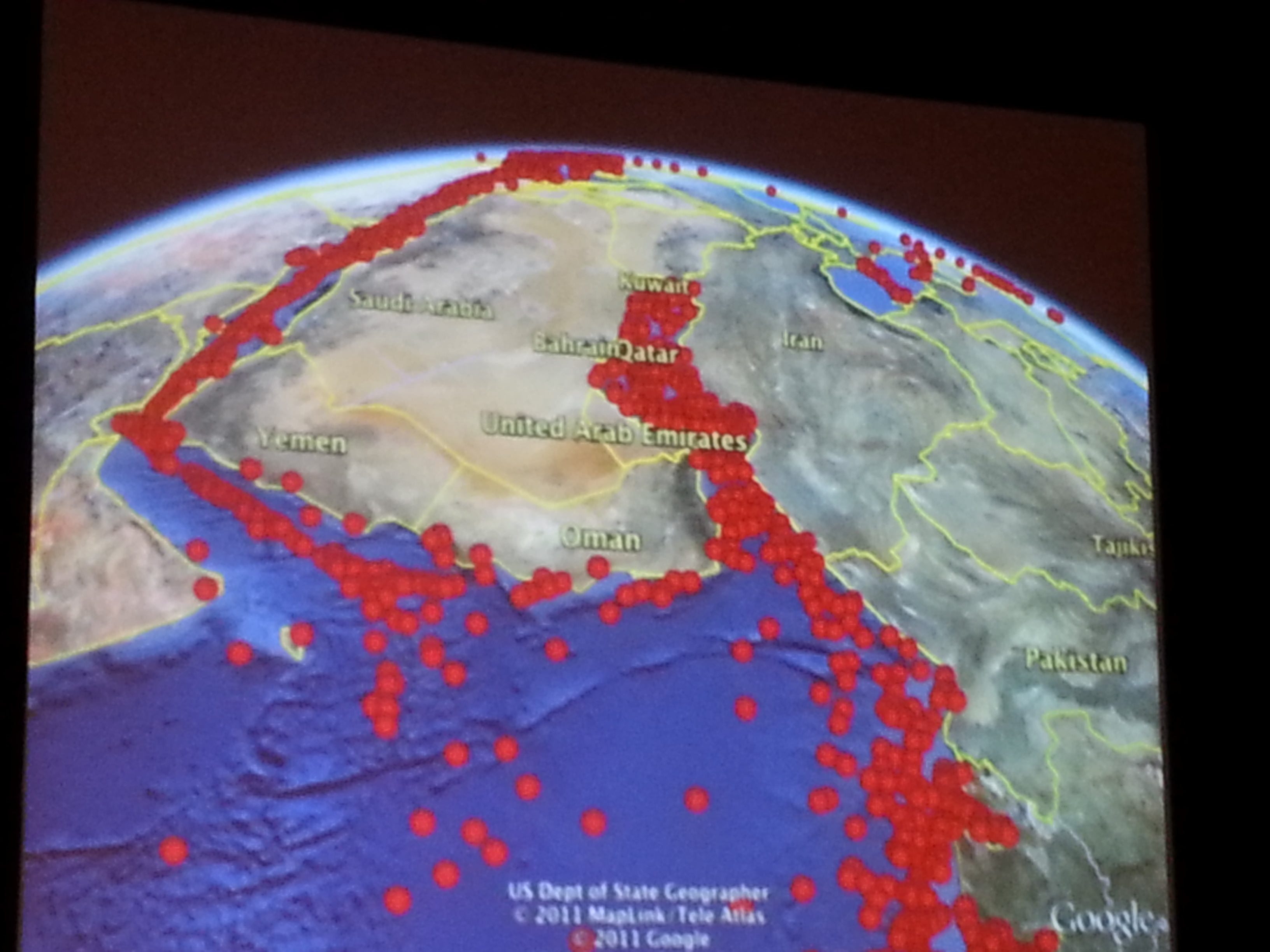 Michael Jones, chief technology advocate at Google, addressed the SPAR Conference this morning in Colorado Springs, Colo. Jones started by saying that Google is on the side of using the data, where the bulk of the audience is on the collection of accurate information, and he begged the audience to collect more and more accurate data to unlock new possibilities.

Jones talked about the need to be humble, where the past isn’t as different as the present as we tend to think, showing a slide of an old and new Mini Cooper and a Cessna airplane. While these don’t

Martin Waldseemüller, the first person to draw a global map, started an interesting trend by placing an elephant on Africa. Jones related that this was an important start, and is something they are after in Google, because they are interested in a global universal map that captures different perspectives of the people. The different perspectives are important, such as with Google Street View, providing that on-the-ground perspective.

To illustrate the Google perspective to unlock the local perspective, Jones discussed the use of Street View cameras on bicycles to capture where the people are. He showed a number of slides with interesting things captured by their cars, saying that locations that showing locations that aren’t just sterile may not be the traditional mapping business, but it helps show reality and how the world works.

Google is one of the biggest users of LiDAR technology with their Street View cameras, both in cars and on bicycles, because the technology provides reality, including our impacts, such as the existence of plastic in the ocean even in the most remote areas. 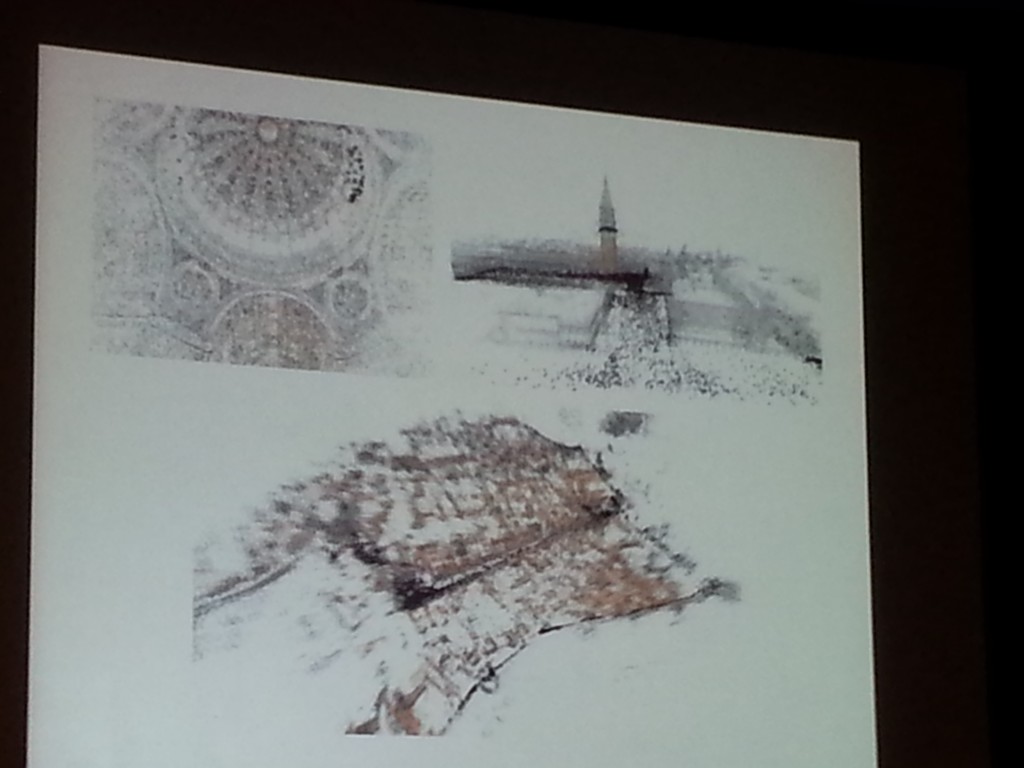 Google is able to create pixel point clouds from all the submitted photos on Panoramio.

Jones discussed the history and power of navigation data aggregated in the 1300’s where the admiralty aggregated all the log books of ships returning to port. This very early crowdsourcing provided a very detailed picture of the world, when comparing speed and distance of every ship to each location over time paints a picture of the world. The near totality of data tells you more about the gaps where you don’t have data.

Jones discussed the value of Android phones for the company, where they have data from each phone that helps improve Google services. An example is having the road traffic data from all the phones to calculate the average speed of the road. With the data that is available, there’s the ability to understand a place more explicitly. Another input is that Google draws from is the 20 billion pictures in Panoramio, where they aggregate that information, even to the point of being able to create a 3D point cloud of the buildings. The key, according to Jones, is to create accessible data capture technologies, making it fun and making the data useful to them, so that people collect data for you.

Jones related a quote from his friend Alan Ray that, a “Point of view is worth 80 IQ points.” Mapping provides that point of view, so Google is committed to mapping the world. Among those commitments is to map the 35,000,000 square kilometers of the ocean. The company is now pursuing the use of autonomous underwater vehicles to map the the ocean, but the cost of $20 Billion will take some time to achieve. He then prompted the audience that if they have a better ocean scanner there’s a billion dollars to make

AIS tracking of vessel traffic is an input that Google is using to help track activity on the ocean. He’s spoken to many governments that weren’t aware if illegal fishing is taking place, not knowing that two private satellites are able to track this information. This new instrumented world is changing perspectives. 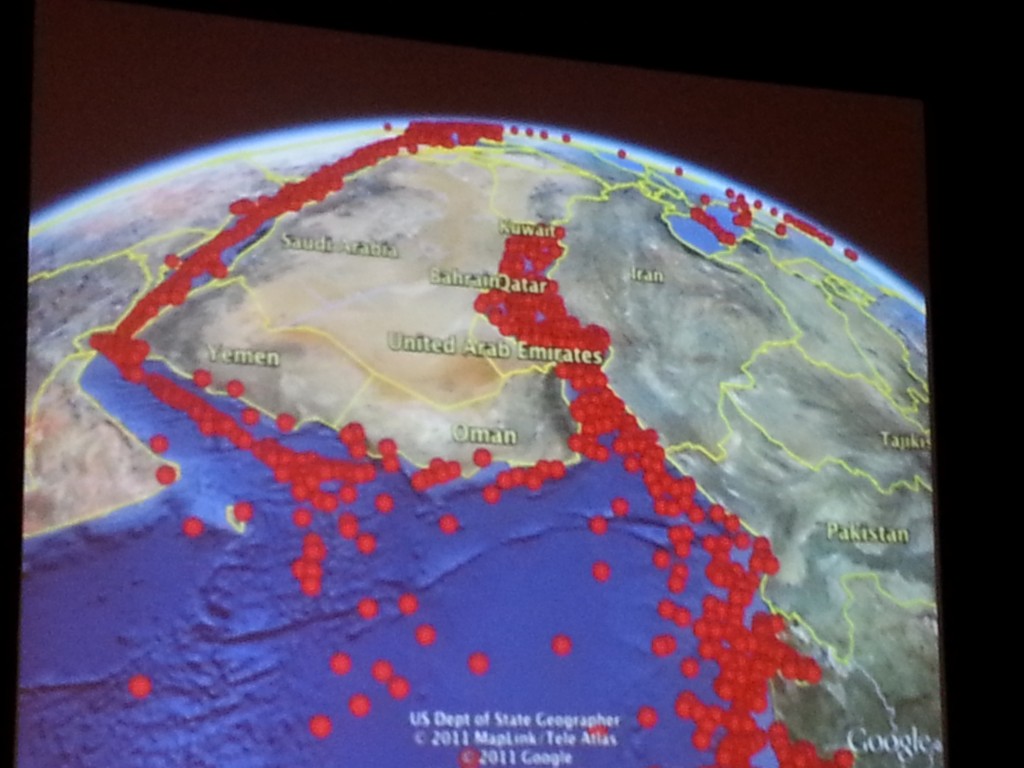 On the accuracy and resolution topic, sub-centimeter resolution imagery is now being captured from balloons and other low-elevation platforms (publiclaboratory.org). It’s cheap, and not as cool as a helicopter, but “for every macho way of doing things, there’s an easy science fair way to do it.”

A new company called Field Agent is turning phone users into field agents. Companies contract with this company, and then knowing where these people are, they take a photo of things of interest to them, such as companies wanting to see how their products are displayed on store shelves. Many use cases were discussed, where harnessing this tool helps both the profit of the company and pays the individual.

Jones mentioned a personal vision that he has, and suggested the audience were the ones to build his vision. If there were cameras on the bumper of every car, with distance and speed, recording details after accident or impact, that data logging would eliminate all the lying and litigation that goes on.

Jones then showed a short teaser for a game called the Niantic Project (nianticproject.com) is a spin-off from Google that provides an augmented reality game that also helps gather data for Google in areas they don’t have information. Jones closed by asking, “what would you do with data from all the billions of phone users to tell you more about the world.”