PennDOT Broadens use of Road Surface Treatment to Boost Safety 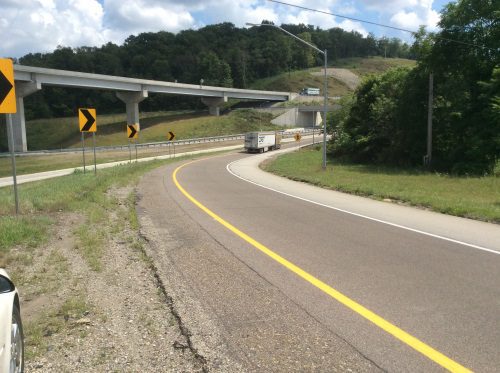 The Pennsylvania Department of Transportation is boosting and expanding the use of high friction surface treatment or HFST pavement surface overlays on rural roadways with horizontal curves, steep grades, and at traffic intersection approaches as the agency is finding that it not only reduces a driver’s chances of losing control of his/her vehicle but extends pavement life and improves the capability of snow removal substances.

“We got onto it four or five years ago, piloting the material on roads with sharp curves,” Liberty Hill, District Plans Engineer with PennDOT District 12, told the AASHTO Journal. “It’s a coarse, sandpaper-like aggregate that is relatively low cost. We started using it on curves because it really helps vehicle tires grip the road. But then we expanded it to intersections with traffic signals as we found it helped reduce rear-end accidents.”

He explained that HFST is composed of a layer of high friction aggregates, typically made from bauxite, that are bound together using a polymer resin binder. The primary benefit of the material is that it provides skid resistance and increases surface friction on the roadway in both wet and dry conditions, Hill noted.

Yet after being pilot tested in 2007, he said PennDOT quickly found the material also acted as a “seal coat” for the pavement, helping prolong its life, while its rough texture helped improve the retention of snow-removal substances applied to the roadway surface.

“It has all these nooks and crannies, like an English muffin,” Hill pointed out. “Thus it ‘holds in’ the salt and other snow-removal materials we use. It’s a win-win all the way around.”

He added that PennDOT District 12 first began applying HFST in the summer of 2014 and, since then, the district has placed HFST in over 50 locations at intersections, curves, and other high crash locations. “There are also many more locations that are to be completed during this construction season,” Hill noted.

He also said that PennDOT is in the midst of an in-house study to formally calculate the benefits of HFST, though no publication date for that study has been set as of yet. “We’re hoping that data will help us identify more locations where we can use it,” Hill noted.