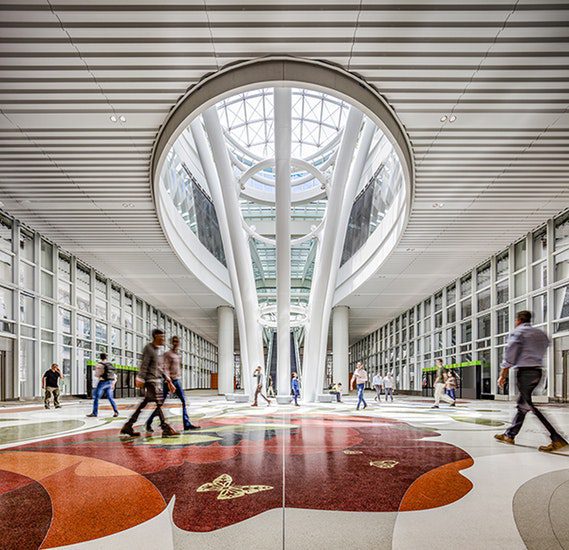 Pelli Clarke Pelli’s architectural design illustrates how a dense, urban, transit-based development can provide a sustainable and livable city. In the future, the Transit Center will link to eleven transit systems, high-speed rail, connecting the city to the region, the state, and the nation.

In 2007, Pelli Clarke Pelli Architects won the project contract with a powerful and innovative design. Eleven years after inception, the critically acclaimed firm’s vision is brought to life. “When we first addressed the design of the Salesforce Transit Center we saw that the building had to be both a gateway to San Francisco and a good supportive neighbor to the buildings adjacent to it. We were committed to the idea that this large-scale structure could be both humane and civilized,” commented Senior Design Principal Fred Clarke, FAIA, co-founder of Pelli Clarke Pelli Architects.  “From its spacious light-filled Grand Hall to the five-acre Salesforce Park, the building embraces and extends the public realm, welcoming everyone to this new urban center. Its exterior wall and art program symbolizes the innovation and creativity of the Bay Area.”

Brilliant, Innovative Design
Salesforce Transit Center draws together local, regional, and national transit networks into a soaring, light-filled building. The light column is the centerpiece of the Grand Hall which is both supporting the building and bringing daylight into its core, creating a welcoming urban space. Reaching from the park, down through the bus deck and Grand Hall to the train platforms two stories below grade for anticipated Caltrain and high-speed rail, this dramatic structure provides light and views to all areas of the Transit Center.

Outside, visible from afar and floating above the street, is a gently undulating wall-inspired by the “Penrose Tiling” invented by famed mathematical physicist Sir Roger Penrose. The wall is both a veil and an enclosure creating a light cloud-like structure visible from many vantage points in the city. At street level, shops and cafes will draw visitors and energize the neighborhood.

At the heart of the Salesforce Transit Center is the 5.4-acre public rooftop park, known as Salesforce Park. The lushly landscaped park features gathering spaces, places for quiet repose and a sprawling lawn with a 800-person-capacity natural amphitheater. Also woven into the landscape is a restaurant and a children’s playground.  Multiple entry points, including bridges that connect to surrounding and future buildings, welcome visitors.  The dense flora offers a wide variety of Bay Area ecologies, from redwood trees to a wetland marsh.

The roof top park is symbolic of Pelli Clarke Pelli Architects and Salesforce Transit Center’s commitment to environmental quality and sustainability. With more than 600 trees and 16,000 plants, the ecosystem will capture 12 tons of carbon annually.

The Transit Center will also reduce greenhouse gas emissions significantly.   The  annual energy consumption is projected to be 50 percent lower than the 2008 Title 24 Energy Efficiency Standards. Its associated carbon emissions will be reduced by approximately 40 percent.

The Transit Center’s roof, by virtue of having the park, retains and reuses storm water that would otherwise flow into sewers. The building’s water reuse system is among the first of its kind in San Francisco. It is also the first project in San Francisco with a rooftop wetland filtration system.  This will save 13.9 million gallons of water and 17,000 tons of carbon dioxide each year due to water conservation and reuse.

The project is on track to receive a Gold certification under the LEED 2009 rating system.

The Transbay Joint Powers Authority, the public agency charged with implementing the Transit Center project, commissioned four major artworks that have been integrated with the Transit Center’s design. Working in collaboration, Pelli Clarke Pelli Architects and the artists have blurred the lines between art and architecture, making both more accessible to the general public. The stunning visual art elements include:

White Light by Jenny Holzer Scrolling LED text wraps around the elliptical glass enclosure that illuminates the Grand Hall, presenting a range of texts composed in or about the Bay Area and the West Coast.

Bus Fountain by Ned Kahn  A series of water jets triggered by sensors responding to the movement of the buses on the level below the park.  The 1000-foot-long fountain makes the arrival and departure of the buses visible and tangible through their choreographed effect on the water.

Construction of the new Salesforce Transit Center was necessitated by the 1989 Loma Prieta earthquake, which damaged the original Transbay Terminal that opened in 1939. The new project broke ground in 2010. The Salesforce Transit Center will serve as the primary bus terminal – and later rail terminal – for the San Francisco Bay Area. The construction is governed by the Transbay Joint Powers Authority (TJPA).

Founded in 1977, Pelli Clarke Pelli Architects has earned a reputation for designing many of the world’s most recognizable buildings, including the World Financial Center in New York, the Petronas Towers in Malaysia, the International Finance Centre in Hong Kong, and the recently opened Salesforce Tower in San Francisco. Pelli Clarke Pelli Architects believes that in order to be truly sustainable, a design must address the economic and cultural factors that make a project successful long into the future.