Trimble Breaks Ground and Uses Their Own Integrated Products for Construction

This new Trimble facility in Westminster, Colo. will house 570 workers from various operations.

Today, Trimble broke ground on a new operations center in Westminster, Colo., with Gov. John Hickenlooper one of many to turn a shovel. The event was presided over by Steven Berglund, president and CEO of the company, who asserted that while the company is headquartered in Silicon Valley, Calif., most of their organic growth would take place in Colorado. The new facility adds a great deal of that expansion capacity in the 125,000 sq. ft., 4-story building with room for 570 people in a picturesque spot close to the mountains and to both Boulder and Denver. With this move, the company helps ensure the continued stature of Colorado as a geospatial hub, building on a long legacy of top-tier companies located here. 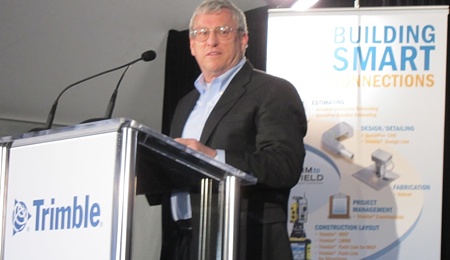 Trimble president and CEO, Steven Berglund, addresses the crowd at the building groundbreaking.

Trimble first moved some operations to Colorado in 2000, during the height of the Dot-com frenzy, when it was expensive and difficult to grow in California. That year, an advance team of 40 relocated to Westminster after an analysis of attractive cities within a two-hour flight from San Francisco International Airport concluded, with the Colorado Front Range as the winner. At that time, Trimble was mostly a GPS company, with revenues that year of $270M. The company has grown and diversified greatly since, with revenues of $2B last year and a market cap of roughly $6.3B. The recent announced acquisition of SketchUp from Google, with headquarters within a 30-minute drive in Boulder, makes their Colorado expansion even greater. 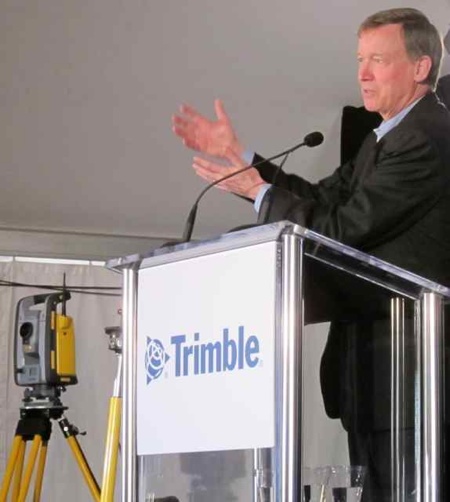 Governor Hickenlooper emphasized the importance of innovation, and finding solutions not anticipated, to drive value.

Work on the new headquarters facility will incorporate a great deal of Trimble technology throughout the building process, from surveying, to site work, excavation, 3D modeling, project management and construction layout. The site was prepared using Trimble technology for machine-controlled grading, which was done well ahead of schedule, due to the integration of a digital workflow from model right to the grading machines. In fact, the entire process is almost entirely digital, and Berglund took the opportunity to mention to the politicians present that the project might be further streamlined if they could keep the models in a digital format for permitting and building review, rather than having to revert back to paper. 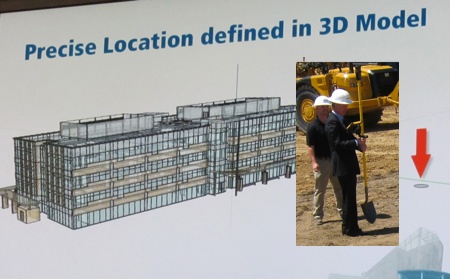 A prism and rugged tablet were fixed to the Governor's shovel for precise positioning.

Governor John Hickenlooper was given a specially-equipped shovel with a prism on top and a rugged tablet with field software mated to a robotic Total Station for precise positioning. The Governor preceded the shovel work with a short speech that commended Trimble’s stellar growth in a tough economy, and for their far-forward vision that is speeding innovation and creating great value for their stockholders. The governor lauded the company’s ability to stay ahead of competitors with technology that provides efficiency gains.

The groundbreaking took place on a beautiful bluebird Colorado day.

The project makes use of Trimble’s entire BIM-to-Field workflow, with pieces for electrical and piping estimating, Tekla BIM software for structural models and collaboration, project managing and scheduling with Meridian Prolog Project Management, Field Link Robotic Layout for job site layout and measurement, CX 3D lasers to collect and update the 3D model, and a central Trimble Connected Community website to track and communicate the project’s progress. In fact, you can learn details of the project yourself on that interactive and detailed project management site here:  http://newbuilding.trimble.com.

While the company can’t yet use their Gatewing unmanned aerial system (UAS) for low-cost project monitoring from above, I was told that they have flown Lidar from a helicopter platform, and will likely update that throughout the process. The 3D input, along with constant webcam monitoring, should make this an excellent case-study example for Trimble products, and for a new more efficient way of doing things.

Comments are disabled
NEXT ARTICLE
The Fusion of ERDAS and Intergraph is Just the Start for Hexagon
May 15, 2012
PREVIOUS ARTICLE
Europe's Future Depends on Cities Resilient to Climate Change
May 14, 2012