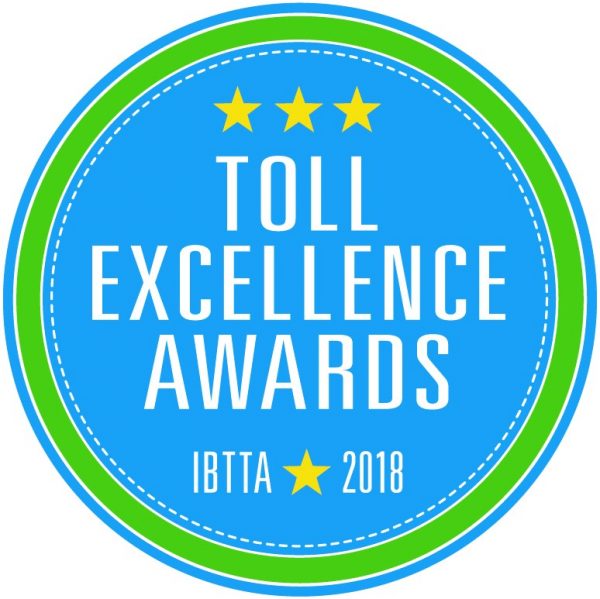 IBTTA, the worldwide association representing the owners and operators of toll facilities and the businesses that serve them, presents the Toll Excellence Awards annually, to highlight the very best projects, innovations and solutions from the international tolling industry.  IBTTA’s Toll Excellence Awards assists in the transmission of new ideas and emerging best practices throughout the industry to benefit the driving public around the globe.

“Colorado’s E-470 Public Highway Authority continues to lead our industry in the implementation of innovative practices promoting greater mobility for drivers,” said Patrick Jones, Executive Director and CEO of IBTTA.  “The 2018 Toll Excellence Awards are presented to an international list of tolling authorities responsible for developing the most creative strategies, harnessing the newest technologies and utilizing the best practices to meet the demands of the driving public. We congratulate E-470 Public Highway Authority on this well-deserved recognition.”

Tim Stewart, E-470’s Executive Director, said “This initiative was much more than improving uncollectable revenue, it was a true effort of collaboration that resulted in better safety, better identification of vehicle owners by law enforcement, a reduction in unreadable license plates and a streamlined system for the auto dealers in the state of Colorado, a grand slam in every way.”

The legislative effort and subsequent collaboration with the Colorado Department of Revenue will help reduce lost revenue and improve safety for law enforcement officers. The project demonstrated how a local toll authority could partner with several state agencies, state and local law enforcement, statewide local governments (64 county clerks), and private businesses to support legislation aimed at streamlining business processes for all key stakeholders. Through a one-time grant, E-470 was able to spare taxpayers the cost of implementing the project.

David Machamer, Chair of IBTTA’s Toll Excellence Award Committee and Assistant Executive Director for Toll Operations with the Oklahoma Turnpike Authority said, “Each year the committee sees a growing number of entries from both the public and private sectors. The process has become quite competitive with entries from across the globe. The industry is proud to share the good works, successful projects and solutions to advance the tolling and transportation industry.”

You can view the full list of 2018 winners, by visiting this link.  The awards will be presented during IBTTA’s 86th Annual Meeting and Exhibition, October 14th – 16th in Baltimore, Maryland. One recipient will be honored with the prestigious President’s Award for Excellence during the awards ceremony.

For more information about the awards or to interview any of the award recipients, please contact Bill Cramer, Communications Director, IBTTA, [email protected]; 202-210-2962

About IBTTA
The International Bridge, Tunnel and Turnpike Association (IBTTA) is the worldwide association for the owners and operators of toll facilities and the businesses that serve them. Founded in 1932, IBTTA has members in 26 countries on six continents. Through advocacy, thought leadership and education, members are implementing state-of-the-art, innovative user-based transportation financing solutions to address the critical infrastructure challenges of the 21st Century. For more information, visit www.ibtta.org or join us on Twitter @IBTTA or #TollRoads.

About E-470
The E-470 Public Highway Authority is the 75-mph toll road that runs along the eastern perimeter of the Denver metropolitan area. The road is not taxpayer-funded and is financed, constructed, operated and governed by the E-470 Public Highway Authority. E-470 is composed of eight local governments: Adams, Arapahoe and Douglas counties, and the municipalities of Aurora, Brighton, Commerce City, Parker and Thornton