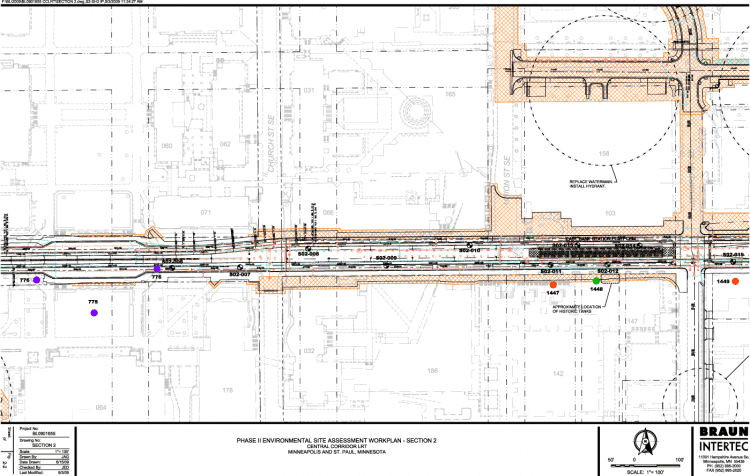 Traditionally, the construction and engineering sectors have been somewhat reticent to adopt new technology. However, with the prospect of a U.S. government infrastructure bill in the works, which could trigger spending of $200 billion in federal money during the next decade to spur an additional $1.3 trillion in spending from cities, states and private companies on major projects, this is changing as firms look to modernize and improve efficiency and collaboration.

Leveraging a cloud-based next-generation information-management system specifically designed for the construction and engineering space, Braun Intertec, a nearly 1,000-person geotechnical and environmental consulting and testing firm headquartered in Minneapolis, was able to complete the largest public-works project in Minnesota’s history, the Central Corridor Light Rail Transit (CCLRT). This project involved collecting and analyzing nearly 1,000 soil and groundwater samples for more than 350 chemicals during a six-month period.

Braun Intertec completed its portion of the project 25 percent ahead of schedule and estimated the technology increased its efficiency by 10-15 percent and helped it come in $300,000 under budget, earning it top awards from the American Council of Engineering Companies of Minnesota and the Minnesota Society of Professional Engineers.

A $1 billion project, CCLRT connects the downtown areas of St. Paul and Minneapolis and carried more than 40,000 riders each day when it opened in 2014. The rail line runs through a mix of residential neighborhoods, commercial and industrial areas, and the sprawling Minneapolis campus of the University of Minnesota. Major stakeholders in the project included municipal and county governments, the Minnesota Department of Transportation (MnDOT), the Minnesota Pollution Control Agency, and the University of Minnesota. The project was constructed and is operated by the Metropolitan Council. On everyone’s mind was the need to minimize the duration of construction effects to local businesses and residents while adequately managing the nearly 1,500 sites of environmental concern identified during a Phase I Environmental Site Assessment (ESA).

Braun Intertec was hired by the Metropolitan Council to perform several critical support services during the project, including a Phase II ESA of nearly 500 locations. Nearly 1,000 soil and groundwater samples were collected and analyzed in the Braun Intertec lab during a six-month period for more than 350 chemicals. In the end, more than 65,000 unique data sheets were compiled. Two field teams of four people each completed the work. As the Phase II ESA was on an aggressive schedule, the most-important stakeholders wanted to receive field observations and boring results daily. 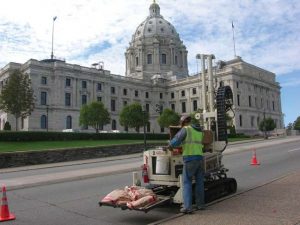 1. Collecting and organizing an unprecedented amount of data within a short timeframe.

2. Communicating these data accurately and expeditiously to multiple stakeholders in a manner that satisfied everyone’s interests.

According to Jackie Dylla, transportation market leader for Braun Intertec, employing conventional field data collection, lab testing and client-reporting methods for a project as large, complex and fast-moving as the 11-mile-long CCLRT could have been a logistical nightmare. It would be difficult, if not impossible, to satisfy stakeholder requirements for speed and accuracy.

To address the need for speed and accuracy, Braun Intertec adopted two innovative approaches. First, field technicians used rugged field computers during boring activities that allowed them to take notes and log soil observations digitally. Preformatted screens and drop-down boxes ensured that all data were entered and labeled consistently. Field notes then were digitally signed and sent to a project manager queue for review.

Second, after review, field observations and boring logs were uploaded daily to a password-
protected document-management and client-reporting Web portal. Test results and other documentation also were uploaded into the portal. Stakeholders received results almost instantly, and they could search and view documents in a variety of ways, including physical locations on maps of the CCLRT project.

The effort paid off in several ways. Stakeholders were delighted by how fast they were getting information needed to keep the project moving forward. Many also were amazed at how easy it was to find specific documents and test results.

In addition, Braun Intertec estimated the two systems increased its efficiency by 10-15 percent and helped it come in $300,000 under budget. For example, because field technicians could communicate field observations in real-time to the project team back at the Braun Intertec office as well as to technical resources at MnDOT, when something of concern was noted at a boring site, additional borings could be ordered in the adjacent area without having to send the field team out on another day.

“That saved us a lot of time having to go back and do a second trip and second sampling and drilling event,” says Dylla.

Braun Intertec used Agile Frameworks’ products MetaField and AgilePort in the construction phase of the CCLRT to serve as a central hub for project information that was available to project stakeholders as it became available. Because it was stored digitally and fully searchable, stakeholders saved valuable time, energy and resources locating information.

Screens, drop-down boxes and data-entry actions conform to ASTM and other industry standards, so all Braun Intertec field technicians now label observations and enter data in exactly the same way. In addition, field and laboratory personnel collaborated to establish a uniform sample naming and labeling system, which includes pre-printed chains of custody and labels.

Clients can search for documents by location, such as soil boring reports and test results related to specific areas of the site.

“There is far less room for ambiguity or error,” adds Dylla. “That’s so important because, for the Corridor Project, we had to screen soils every 2 feet, take 1,000 samples at 500 boring sites, and distribute so much information to so many people. That meant, for quality purposes, we needed to keep it pretty structured.”

Consistency and accuracy also were important in getting field observations into project-management and quality-assurance systems and ultimately into the client portal. MetaField ties these often cross-departmental operations together into a seamless, highly efficient process. After data are sent digitally from the field, there’s no need to retype information into project-
management, LIMS, and document-
management and client-reporting systems, including FTP sites and customer portals. Rather, data flow from one system into another. That means data have to be accurate and consistent the moment they’re entered.

Consistency also was crucial to the search and viewing capabilities of AgilePort, which are based on metadata such as date, sample and boring IDs, corridor section, street location, and others, so documents can be sorted and viewed in numerous ways. For example, unlike FTP sites, which require clients to search through file folders to find documents, boring logs and test results, AgilePort allowed CCLRT project team members and stakeholders to click on a map of the entire 11-mile project and view information by physical location. That feature was especially popular with stakeholders, who frequently needed to find location-specific information, and it continues to be used extensively during the construction phase.

For example, when contractors were working in an area identified as contaminated, they went to AgilePort, clicked on that section of the project map, and got all documentation and test results for the area. Data then were sent to landfills to quickly get approvals.

Dylla offers another example: “Say a field technician observes something unusual at the corner of University and Victoria,” she notes. “I can go into the client portal, look at the map, drill down to that specific location, and immediately find the borings that were done in that area and compare them to what we are finding in the field.”

Ahead of Schedule and Under Budget

The efficient dissemination of thousands of pages of laboratory data obtained during the Phase II ESA for CCLRT was essential in obtaining more than 50 environmental liability assurance letters for parcels acquired as part of the project. In addition, because results of the Phase II ESA were communicated to project partners during the design process, environmental impacts to construction were minimized, reducing overall project cost. Braun Intertec completed its portion of the project 25 percent ahead of schedule and nearly 20 percent less than budgeted costs.

“A lot of this process is no different than what environment-testing firms do on a traditional redevelopment project on contaminated property,” notes Dylla. “But the fact that we did it on an 11-mile stretch of one of the oldest roadways in the Twin Cities in such a short timeframe is pretty remarkable.”

The company’s efforts didn’t go unnoticed. In 2011, the American Council of Engineering Companies of Minnesota and the Minnesota Society of Professional Engineers gave Braun Intertec its top awards for the many innovative reporting methods built into the Agile Frameworks solution.