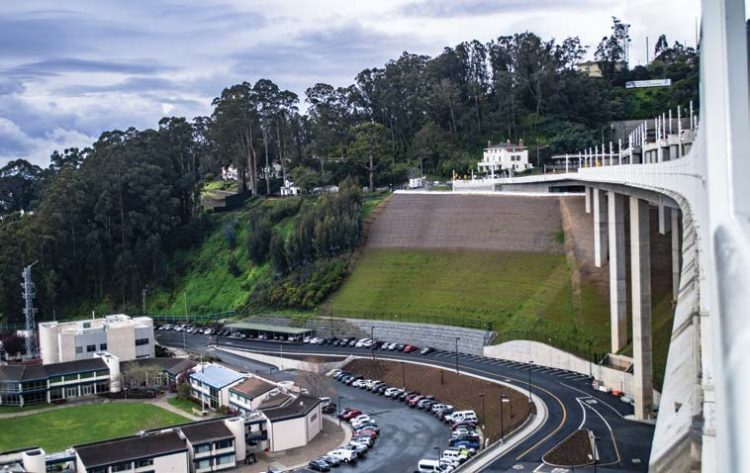 There are many aspects of the San Francisco-Oakland Bay Bridge’s recent reconstruction that could be considered engineering wonders. After nearly 12 years of construction, engineering challenges and cost overruns, the new eastern span opened in September 2013 to replace a seismically unsound portion of the structure that was damaged during the 1989 Loma Prieta earthquake. The new self-anchored suspension bridge, with a final price tag of $6.5 billion, was designed to withstand the strongest earthquake estimated by seismologists to occur at the site during a 1,500-year period. 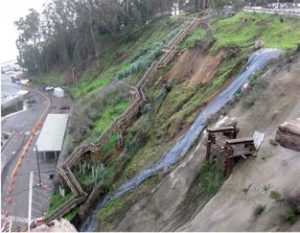 The slope behind the U.S. Coast Guard building on the southeast coast of Yerba Buena Island was reinforced to reduce the risk of landslides. Located next to the entrance to the recently reconstructed Bay Bridge, the sandy, steep slope was prone to erosion.

But one project aspect receiving little attention is the extraordinary work that went into reinforcing a slope behind the U.S. Coast Guard building that sits at water level on the southeast coast of Yerba Buena Island. The reinforced slope was a small part of the overall demolition work on the old bridge that Caltrans awarded to Silverado and California Engineering Contractors (CEC). The joint venture was awarded two contracts, in excess of $200 million, which encompassed the complex removal of the entire bridge superstructure.

The project also included some significant new construction elements. Silverado and CEC assembled a select group of subcontractors to build a new east-bound onramp to the bridge and a bike path extension as well as perform roadwork and hillside-stability work. These challenging aspects of the bridge’s demolition started shortly after the new span opened.

“When the bridge opened, there was a temporary structure that fed traffic from Yerba Buena Island onto the new bridge,” explains CEC Safety Manager Robert Ikenberry. “We demolished the old bridge to free up the air space to construct the new onramp onto the new bridge.”

The onramp and reinforced soil slope were among the final phases of the new bridge’s construction. 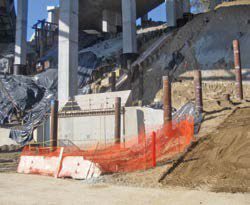 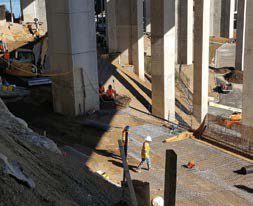 The project team discovered numerous obstacles from the old bridge that had to be excavated and removed before slope-reinforcement work could continue.

Work on the reinforced soil slope, officially called an embankment confinement system (ECS), was awarded to OC Jones & Sons as part of a $5.6 million contract related to the Bay Bridge demolition. The scope of the job was to protect and reinforce the existing slope behind the Coast Guard building to reduce the risk of landslides. Located next to the entrance to the new bridge, the sandy, steep slope was prone to erosion, as heavy rains in 2016 washed out a staircase along the slope.

Caltrans designed a 112-foot-high reinforced soil slope, sitting on top of a 21-foot-high gabion fascia mechanically stabilized earth (MSE) wall at the bottom of the slope next to an existing gabion gravity wall. Maccaferri manufactured all the ECS-related products as part of a $1.5 million contract with OC Jones.

ECS information included in the project bid drawings was limited to identifying the location, typical cross sections and system details. The ECS facing alignment was originally proposed to follow contours. However, the proposed slope of the contours varied from left to right and top to bottom, demanding custom manufacturing and complex construction. 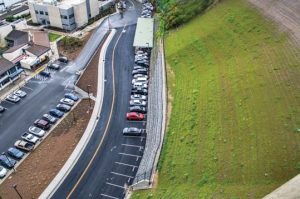 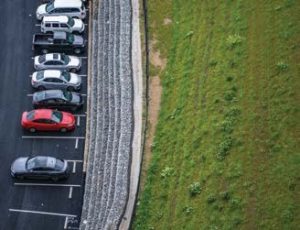 The Terramesh system and PVC-coated gabions were used to form a 21-foot-high gabion fascia MSE wall that sits at the bottom of the slope next to an existing gabion gravity wall. Each gabion fascia unit was filled with 4- to 8-inch rocks, and subsequent layers were placed on the completed layer beneath.

“Maccaferri’s engineering team led the discussions with the contractor and Caltrans, and recommended alignment changes and a uniform slope to simplify the construction, saving the contractor time and money while maintaining the solution’s quality and integrity,” explains Sachin Mandavkar, Maccaferri’s technical manager.

Maccaferri’s engineering team prepared the design drawings with the layout of the state-approved products, and Cignarella trained the contractor on each product’s installation. The project started in February 2017 and finished in November 2017, a longer timeframe than expected because of the challenging onsite conditions. 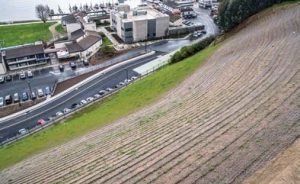 In addition to the slope’s height and complex nature, the project team discovered underground obstructions that were remnants of the old bridge. The team had to figure how to work around an existing drainage system, manhole drain inlets and an electrical duct bank as well as numerous columns and foundations associated with the new bridge.

“Our design had to be modified a few times to accommodate existing conditions,” says OC Jones’ Eric Ronning, whose team was responsible for installing the ECS. “Once we found these elements, we had to expose them and work with the state and Maccaferri to figure out how we were going to accommodate the slope around these things before we could move on. You learn as you go to accommodate your situation.”

Another challenge associated with the site was that it was only accessible from one side, which limited the team’s flexibility.

Maccaferri’s Terramesh system and polyvinyl chloride (PVC)-coated gabions were used to form the gabion fascia MSE wall at the slope’s base. Terramesh is a Highway Innovative Technology Evaluation Center (HITEC)-evaluated MSE retaining wall system comprised of stone-filled gabion baskets for the facings and double-twisted metallic wire reinforcement. The system is manufactured and shipped with all components mechanically connected at the production facility. The system’s lid, facing and reinforcing panel are woven into a single unit.

Following assembly onsite, each gabion fascia unit was filled with 4- to 8-inch rocks. Structural backfill then was placed on the soil reinforcement mesh and compacted. Subsequent layers were placed on the completed layer beneath.

After the Terramesh system and gabions were installed at the bottom of the slope, the project team started reinforcing the slope using Maccaferri’s Green Terramesh system, a HITEC-evaluated reinforced soil slope system comprised of continuous double-twisted wire mesh that forms the top wrap and facing, and continues into the reinforced soil zone as a reinforcement. The units are lined with an erosion control blanket and stiffened with a galvanized welded mesh panel. Brackets are used to achieve the design inclination.

When the foundation for the units was graded according to the construction drawings, the units were placed in position empty and tied together to form a continuously connected, monolithic structural unit. Pre-formed steel brackets were used to maintain each unit’s required slope angle. The angled front face and erosion control blanket are designed to help establish natural vegetation, using high-quality topsoil.

“The project had a lot of challenges, but the team did a great job overcoming them,” says Cignarella, reflecting on the project. “I couldn’t be more pleased with the way it turned out.”

“The wall looks good, despite all the challenges,” concurs Ronning. “The state was happy. And our goal was to finish before winter, and we were able to achieve that.”