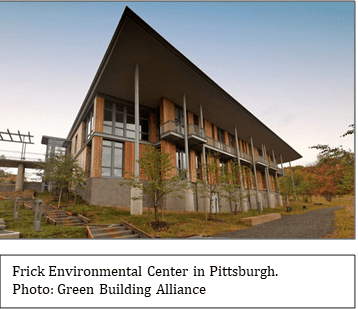 (PITTSBURGH )  – The Frick Environmental Center in Pittsburgh has received Living Building Challenge (LBC) Certification, the world’s most rigorous proven performance standard by the International Living Future Institute.  A project of the Pittsburgh Parks Conservancy, in partnership with the City of Pittsburgh, it is the first Living Building in the U.S. that is municipally owned and free and open to the public, and one of only 21 buildings worldwide.

The new building fully supports its own needs for water and energy by incorporating technologies such as a ground-source geothermal heating and cooling system; a natural ventilation system; solar panels; and a rainwater collection and irrigation system that includes the use of parking lot canopies and permeable pavement in portions of the parking area.  Rainwater from the Center’s roof is directed to fall in a water curtain, allowing visitors to look out through a veil of rain during downpours.  That water is then collected and directed into the site’s water management system.

Energy efficiencies also include the use of reclaimed rainwater for flushing toilets and irrigation purposes; redirection and capture of stormwater runoff from parking and lawn areas; and a wetland zone that absorb overflow from the rainwater harvesting system.  All waste water is filtered and treated on site before it is released naturally on site.

Located at the entrance to the city’s 644-acre Frick Park, the Frick Environmental Center serves as the gateway to Frick Park, and as a space for environmental classes, events and programs.