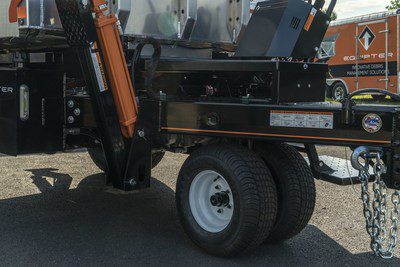 “Roofers work hard, and they expect their roofing equipment to be just as productive and rugged as they are,” Marketing Director Sam Beiler says. “These changes make the RB4000 lift even easier to use and increase the reliability of certain features, so roofers can focus on producing more, selling more, and earning more referrals.”

The Equipter RB4000 lift, sometimes called the Roofer’s Buggy, is a self-propelled, raisable trailer that allows roofers to throw debris directly into its raised container instead of dropping it onto the homeowner’s lawn. The improvements, which went into effect for units produced after January 1, 2018, include:

Beiler says the tweaks build on the innovative product design his family first developed in 2004. “Our team is constantly looking for ways to improve the RB4000 lift to help roofing professionals raise productivity, reduce labor costs, decrease cleanup time, and lower the risk of property damage.”

About Equipter
Equipter, a family-owned business in the heart of Pennsylvania Amish country, manufactures and sells the RB4000 lift and a full line of productivity-boosting equipment for roofing and contracting professionals.