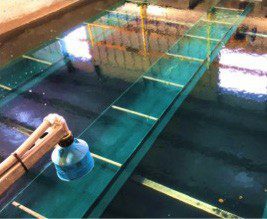 “The City projected that the nine filters that were currently operating on its main water treatment plant would not be adequate to handle increasing demand.  We replaced the antiquated PLCs with modern Bedrock control functionality on six of the filters. We had already installed a communications gateway based on Inductive Automation’s Ignition SCADA software and it was just a matter of creating a hierarchy of control objects, which we did easily using Bedrock’s IEC 61131 integrated engineering environment,” said Brown Engineers principal, Dee Brown.

The project improvement in the automatic backwash process significantly helps conserve water, improves water quality, and initiates collection of filter data needed for extending regulatory run-time limits. And because cyber security is built into the Bedrock OSA control system, the new controls were protected by industry-leading intrinsic cyber security – at no additional cost.

Well-documented results show how the six upgraded controls perform consistently, as if they were a single unit, while performance of the three remaining filters varies wildly, with flow rates varying from 1400 to more than 2000 GPM. Download the fully-illustrated case history at http://info.bedrockautomation.com.pages.services/hot-springs-case-study/.

About Bedrock Automation
Bedrock Automation, based in San Jose, California, is the maker of Bedrock® the world’s most powerful and cyber secure automation platform.  This Silicon Valley company has assembled the latest technologies and talents from the automation, cyber security and semiconductor industries to build an unprecedented automation solution for industrial control based on three prime directives: simplicity, scalability and security. The result is a new platform of automation called OSA®, Open Secure Automation, with a revolutionary electromagnetic backplane architecture and deeply embedded ICS cyber security to deliver the highest levels of system performance, cyber security and reliability at the lowest lifecycle cost. Build on Bedrock®!