/ Energy / Indonesia and China Will Be Growth Engines of Oil Storage Industry in Asia and Oceania, says GlobalData

Indonesia and China Will Be Growth Engines of Oil Storage Industry in Asia and Oceania, says GlobalData 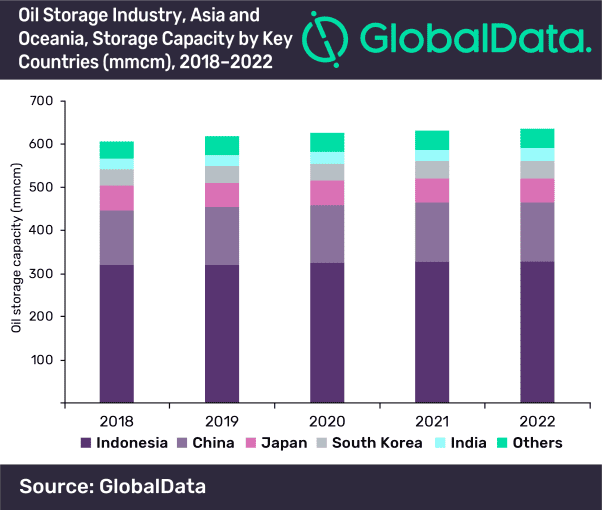 Indonesia and China will drive most of the growth in oil storage industry in Asia and Oceania over the period 2018–2022, according to leading data and analytics company GlobalData. The two countries are set to add more oil storage capacity than any other countries in the two regions over the outlook period.

The company’s report ‘Oil Storage Industry Outlook in Asia and Oceania to 2022’ shows that Asia and Oceania will account for 44.5% of the total global oil storage capacity in 2018. The storage capacity in the two regions is expected to increase from 606.6 million cubic meters (mmcm) in 2018 to 636 mmcm in 2022. The two regions are expected to have a combined capital expenditure (capex) of $14.1bn, of which more than 55% will be spent by Indonesia and China.

Among countries, China leads both in terms of capacity additions and capex on new build oil storage projects. The country has planned investment of $5.5bn and will increase its oil storage capacity from 126.4 mmcm in 2018 to 135.2 mmcm in 2022, a growth of 6.9%.

GlobalData forecasts Indonesia to experience the second highest capacity additions and capex on new build projects in Asia and Oceania. The country’s total oil storage capacity is expected to increase from 320.3 mmcm in 2018 to 328.9 mcm in 2022, at a growth of 2.7%. The country is expected to spend about $2.5bn on newly announced and planned terminals over the reporting period.

Tejomoortula adds: “As in China, Indonesia too has initiated a strategic petroleum reserves program that aims to store 30 days of crude, leading to the growth of oil industry in the country. Growing demand for petroleum products in Indonesia, especially in the eastern parts, is also driving the growth.”

India is another leading country in Asia and Oceania accounting for about 20% of the region’s capacity growth during the outlook period. The country will spend an aggregate amount of $1.2bn on new build oil storage terminals over the forecast period. The country’s storage capacity is estimated to increase from 25.7 mmcm in 2018 to 31.6 mmcm in 2022, should all the projects be realized.