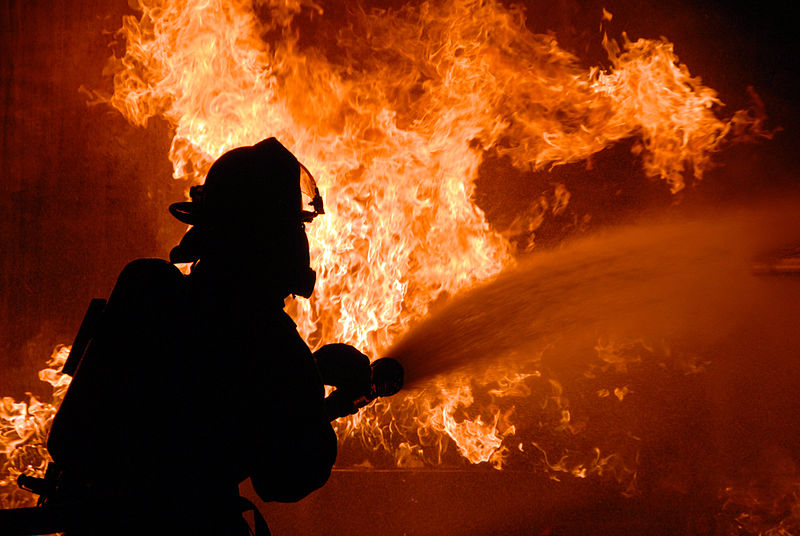 Bentley’s inaugural Chief Donald J. Burns Memorial Research Grant of $25,000 has been awarded to the University of Texas Group.  Aimed at keeping first responders safer during building emergencies, the grant Is awarded annually by Bentley Systems through Its partnership with the Society of Fire Protection Engineers Scientific and Education Foundation. The grant for 2012 has been awarded on its behalf to Dr. Ofodike Ezekoye and Austin Anderson, of the University of Texas Fire Research Group (UTFRG), by the Society of Fire Protection Engineers (SFPE) Scientific and Educational Foundation. The $25,000 grant is named in memory of FDNY Assistant Chief Donald Burns, who died in the collapse of the World Trade Center Towers on September 11, 2001, while setting up his command post to direct the evacuation. The purpose of this grant is to help advance the integration of information modeling as a means of improving infrastructure safety and first-responder preparedness.

Dr. Ezekoye, UTFRG director, said, “We are deeply honored to accept this award dedicated to Chief Donald Burns, who was among the 343 firefighters and paramedics that gave their lives in the collapse of New York City’s Twin Towers. With this grant, UTFRG hopes to produce software and hardware solutions to better predict fire hazards and mitigate their impact in commercial and governmental buildings, thereby reducing both civilian and firefighter deaths and injuries caused by fires.”

Lew Reed, Bentley Systems vice president and Chief Burns’ brother-in-law, said, “I know that Don would be so pleased to see such important research being carried out in his name – research that may one day save the lives of his fellow first responders across the country and around the world. There is no better way to recognize his devotion to serving his community and the ultimate sacrifice he made trying to save the lives of others.”

In explaining the UTFRG project, Austin Anderson, graduate research assistant, said, “Our project seeks to create a statistical fire heat release rate (HRR) distribution for a structure that has been described by a building information model. We believe this can be used to create a fire risk map of a burning structure that will be useful to firefighters as they initiate operations within it. Knowledge of the fire propagation through alarms, coupled with a model that uses best likely estimates for the fire intensity (HRR) in a building’s compartments, would allow arriving first responders to better allocate their firefighting resources.”

Each year, over a five-year period, the Chief Donald J. Burns Memorial Research Grant will fund one or more baccalaureate, master’s, or doctorate student global research projects that apply information modeling to improving emergency responder safety when training for, responding to, and operating during building emergencies. The grant is being awarded by Bentley through its partnership with the SFPE Scientific and Education Foundation.

“This grant provides an important opportunity to advance the science and technology that help protect the lives of the men and women who share Chief Burns’ passion for serving the public in the honorable and selfless profession of firefighting,” said SFPE Engineering Program Manager Chris Jelenewicz. “Specifically, this grant incorporates the principles of fire protection engineering into building information management to provide tools that can be used by first responders.”

Chief Donald Burns was a decorated 39-year veteran of the New York City Fire Department (FDNY). He was known for his in-depth knowledge of firefighting and the FDNY, and is fondly remembered as a walking encyclopedia for his broad knowledge of New York City. Fighting fires was his passion, and he inspired many of his colleagues within the department, who hailed him as an exceptional leader and brilliant tactician and strategist. Burns was elevated to lieutenant and later captain before being named chief of operations after the bombing of the World Trade Center in 1993. He was promoted to Citywide Tour Commander in 1997. Burns is survived by his wife Elizabeth and his children Lori; Michael, a police officer; and Patrick, a lieutenant in the FDNY.

About Society of Fire Protection Engineers

Organized in 1950, the Society of Fire Protection Engineers (SFPE) is the professional organization that represents engineers engaged in fire protection worldwide. Through its membership of over 5,000 professionals and 65 international chapters, SFPE advances the science and practice of fire protection engineering while maintaining a high ethical standard. SFPE and its members serve to make the world a safer place by reducing the burden of unwanted fire through the application of science and technology. For more information about SFPE, visit www.sfpe.org or email education@sfpe.org.

Bentley is the global leader dedicated to providing architects, engineers, geospatial professionals, constructors, and owner-operators with comprehensive software solutions for sustaining infrastructure. Bentley Systems applies information mobility to improve asset performance by leveraging information modeling through integrated projects for intelligent infrastructure. Its solutions encompass the MicroStation platform for infrastructure design and modeling, the ProjectWise platform for infrastructure project team collaboration and work sharing, and the AssetWise platform for infrastructure asset operations – all supporting a broad portfolio of interoperable applications and complemented by worldwide professional services. Founded in 1984, Bentley has more than 3,000 colleagues in 50 countries, more than $500 million in annual revenues, and since 2005 has invested more than $1 billion in research, development, and acquisitions.

Additional information about Bentley is available at www.bentley.com and in Bentley’s annual report. For Bentley news as it happens, subscribe to an RSS feed of Bentley press releases and news alerts. To view a searchable collection of innovative infrastructure projects from the annual Be Inspired Awards, access Bentley’s Year in Infrastructure publications. To access a professional networking site that enables members of the infrastructure community to connect, communicate, and learn from each other, visit Be Communities.